Growing up Dewsbury and then playing for Batley Bulldogs, the only derby which mattered to Alex Walmsley was the battle of those two West Yorkshire towns in the Heavy Woollen Derby.

When he signed for St Helens in 2013 though, the prop soon came to discover just how much the clashes between Saints and Wigan Warriors mean – not least of all because club chairman Eamonn McManus and chief executive Mike Rush made it clear to him before the ink was dry on his contract.

The latest instalment of the rivalry which stretches back to the Northern Union’s first season in 1895 will be played out live on Sky Sports in Sunday evening’s Betfred Super League showdown and Walmsley is in no doubt it is a match which resonates beyond the two near neighbours.

“A derby is a derby, no matter where you are in the world there is always that fierce opponent you look forward to playing the most,” Walmsley said. “The Heavy Woollen Derby was quite a spectacle, but this is another level.

“I’ve said it in the past but the first day I signed, as I was signing the contract to become a Saints player the first thing Eamonn and Rushy said to me was ‘As long as you beat a team beginning with W, we’re not that bothered!’.

“Especially when it’s derby week and you’re bumping into people, it’s ‘Is everyone all right? How are things looking? Make sure you beat them on Sunday’.

“It all adds to what’s a spectacle and it’s a huge game – not just for our clubs, it’s a huge game for the sport as well. There are always a lot of neutrals watching this match and no doubt it will be the same on Sunday.”

It is a slightly different story for Wigan’s Oliver Gildart, who hails from nearby Hindley and grew up fully aware of the great rivalry between the two clubs and would regularly face teams from St Helens playing for junior club Wigan St Patricks and then as part of the Warriors’ youth set-up.

He also went to school with former Saints forward Luke Thompson, now of Canterbury Bulldogs, and will be joining him in the NRL next year after signing a two-year contract with Wests Tigers.

But while he is excited by the opportunity to test himself in Australia, Gildart makes no secret of the fact he will miss playing in these derby clashes.

“It’s probably one of the biggest things I’ll miss because there is no derby like it in the world,” Gildart said. “I know there is a lot of banter on social media about what is the biggest derby, but it’s got to be Wigan-Saints for me.

“It’s been drilled into me from a young age. Whether you’re playing schoolboys or U19s, it’s always a great game to be a part of.

“It’s something both sets of fans and families can really get up for, and they’re the games you remember for a long time.”

Sunday’s match at Totally Wicked Stadium will be the first time St Helens and Wigan have met since their epic duel in last season’s Super League Grand Final, which ended with Jack Welsby snatching an 8-4 victory for Saints with a try on the final play of the game.

Both teams come into this match on the back of defeats to one of their other fierce rivals, Warrington Wolves – albeit with St Helens having not played since that 6-2 loss on June 17 due to their scheduled matches since then falling victim to positive Covid-19 tests at rivals. 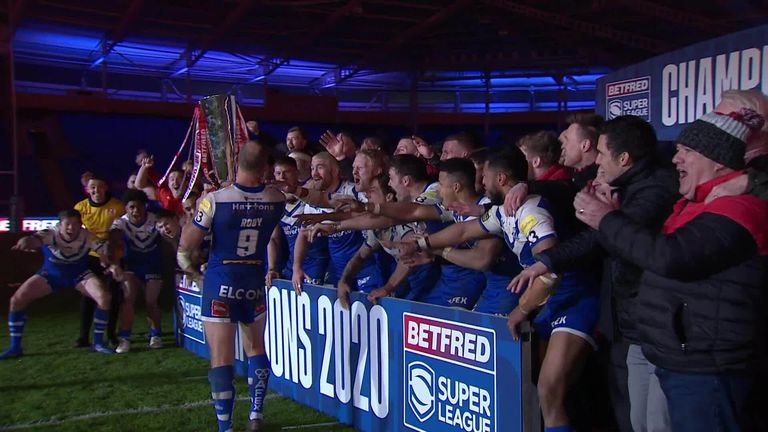 “We haven’t played each other since that night in November we all remember so well and it’s a game we’re looking forward to,” Walmsley said.

“They’re through a few challenges at the minute and not playing as I’m sure they’d like to be playing, but when it comes to these derbies form goes out the window.

“We’re looking forward to it, certainly after a few weeks off a good, physical game against a very good Wigan side is the best kind of medicine.”

Wigan, on the other hand, have a much shorter turnaround following their 40-14 defeat at home to the Wolves on Wednesday evening and go into the derby aiming to end a run of four straight losses.

Gildart knows just how much it would mean to the Cherry and Whites faithful to get back to winning ways against their bitterest rivals, and has the extra motivation of wanting to make more memories in these contests before departing for Australia at the end of the season.

“It’s disappointing I won’t get to play in these [after 2021], but I want to make the most of the last couple I will get this season,” Gildart said. “Personally, I would love to get a couple of wins against St Helens before I leave.

“It’s definitely the biggest game you can play in a Wigan shirt. Growing up in Wigan and watching from the stands, it’s great to be part of these games and I’m really looking forward to getting out there.”