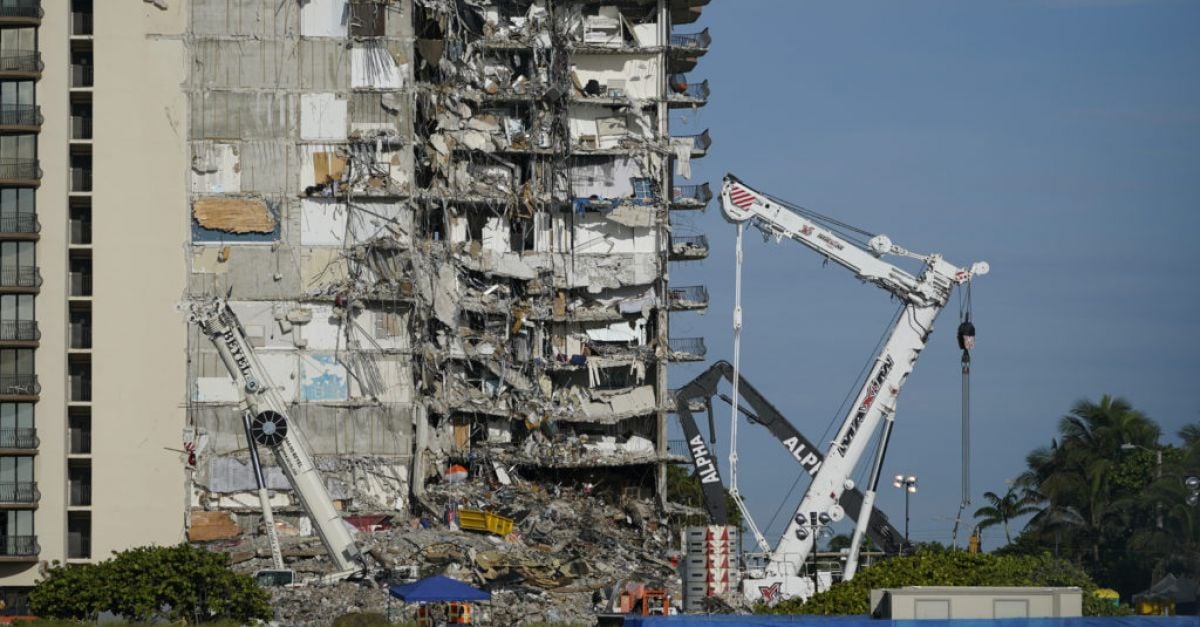 The tally of missing people in the Florida apartment building collapse has been substantially reduced from 145 to 128 after duplicate names were eliminated and some people reported missing turned up safe, officials said.

Authorities also announced the recovery of two more bodies, including the seven-year-old daughter of a Miami firefighter, raising the confirmed death toll to 20 people.

She explained that in some cases, one person may have been moved to the “accounted for” list when, in fact, an entire family had been found to be safe.

Detectives have worked around the clock to vet the list, re-contacting relatives and others.

In some cases, English and Hebrew names have been offered for the same missing relative, officials have said.

The seven-year-old who died in the collapse was “a member of our fire family”, Miami mayor Francis Suarez said.

The discovery of the girl’s remains was especially hard on rescuers, Ms Levine Cava said.

“It was truly different and more difficult for our first responders. These men and women are paying an enormous human toll each and every day, and I ask that all of you please keep them in your thoughts and prayers,” she said at a news conference.

Friday’s announcements came a day after officials said they were working on plans to tear down what is left of the building after concerns about the structure’s instability prompted a 15-hour halt to the search for survivors.

Scott Nacheman, an FEMA structures specialist, said the demolition would trigger a slowdown in the rescue operation, but it would create a safer working environment that could allow more personnel on the site and accelerate the pace of the work.

He said it was likely to be weeks before officials schedule the demolition.

No-one has been rescued since the first hours after the collapse of the 12-storey Champlain Towers South apartment block.

On Friday morning, about a dozen workers could be seen digging through the pile that now reached about 20ft (six metres), more than 10ft (three metres) less than it was a week ago.

Cranes were again lifting heavy objects from the pile and then workers would climb into the pile and begin removing smaller rubble by hand.

The rescue work was halted early on Thursday after crews noticed widening cracks and up to a foot of movement in a large column.

Work resumed shortly before 5pm after the site was evaluated by structural engineers, Ms Levine Cava said, describing firefighters as “really, really excited out there”.

“We will continue to search feverishly, as we have done all along in the parts of the collapse that we currently have access to,” she said.

The work stoppage had threatened to dim hopes for finding anyone alive in the debris a week after the tower came down.

Surfside mayor Charles Burkett said the halt was worrying since “minutes and hours matter, lives are at stake”.

The cause of the collapse is under investigation.

A 2018 engineering report found that the building’s ground-floor pool deck was resting on a concrete slab that had “major structural damage” and needed extensive repairs.

The report also found “abundant cracking” of concrete columns, beams and walls in the parking garage.

Just two months before the building came down, the president of its board wrote a letter to residents saying that structural problems identified in the 2018 inspection had “gotten significantly worse” and that major repairs would cost at least 15.5 million dollars.

With bids for the work still pending, the building suddenly collapsed last Thursday.