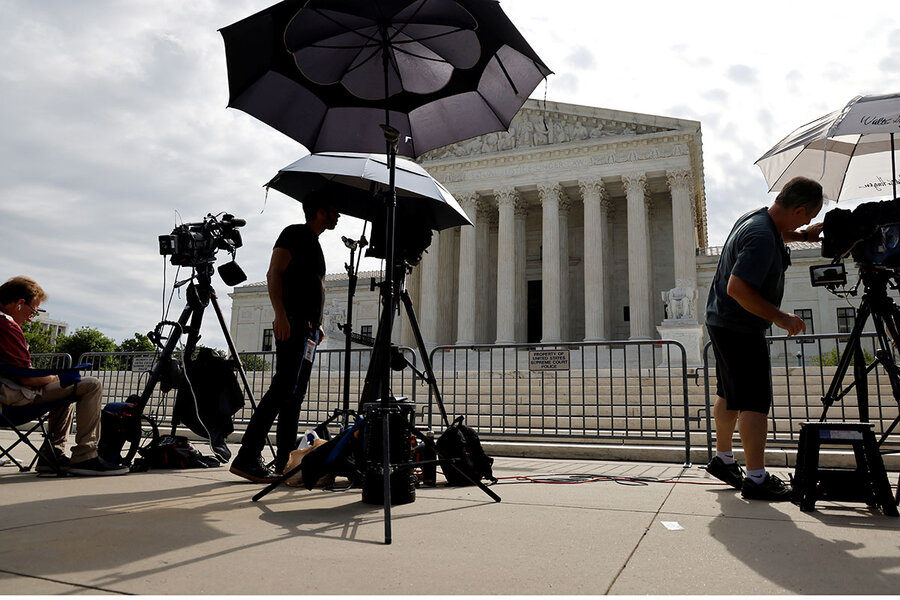 Critics of the decision said it rested on a narrow reading of the Voting Rights Act, a broad civil rights era law that bans racial discrimination in voting. Under Chief Justice John Roberts, the court has been chipping away at that act, says Steven Schwinn, a professor at the University of Illinois Chicago School of Law.

In 2013, the court essentially invalidated the law’s requirement that some states get federal clearance before making election changes. Now it is making it harder to prove out-and-out racial discrimination, says Professor Schwinn.

“They don’t write the Voting Rights Act out of law, but it comes close,” he says.

The case at issue, Brnovich v. Democratic National Committee, was one of the biggest cases of the term. Its 6-3 vote was split along ideological lines, with conservatives in the majority and the three liberal justices in dissent.

One is the “out of precinct” policy, which requires election officials to throw out the ballot of any voter who votes in a precinct other than their own, including their choices for statewide or national offices. The second is a state law making it a felony to collect and deliver another person’s absentee or mail ballot, with exceptions for family members and authorized caregivers.

For the Democratic Party, bringing the case was something of a risk to begin with. The Arizona policies in question “are far from the most egregious voting rights violations,” wrote Richard Hasen, a professor at the University of California, Irvine School of Law, prior to oral arguments in the case. Challenging them all the way to the Supreme Court could give the conservative justices an opportunity to weaken the remaining key Voting Rights Act provisions.

In the end, the justices did not go as far as some critics worried they might. But they did narrow key aspects of the Voting Rights Act. That might make it more difficult for Democrats to challenge aspects of the many new Republican-pushed laws on voting and elections, which have passed in Georgia and Florida and are moving through other states.

In his majority opinion, Justice Alito wrote that while Arizona generally makes it very easy to vote, voting is an act that places some level of “burden” on everyone. “Mere inconvenience” in the voting process is not a violation of the law.

The presence of some disparities between groups of voters “does not necessarily mean that a system is not equally open,” wrote Justice Alito. The provisions in question need to be seen in the context of how much more difficult it was to vote in 1982, he added, which was the last time the Voting Rights Act section on discriminatory laws was amended.

This perspective is a “cramped standard” that ignores legal and technological changes over the intervening time, said Debo Adegbile, a partner at the legal firm WilmerHale. He appeared at an American Constitution Society event following the close of the court’s term.

It’s clearer than ever there are two ways to win elections in the U.S., said Mr. Adegbile. One is by mobilizing voters and trying to win them over. The other is by narrowing – demobilizing voters who lean toward your opponent.

“These are both long traditions in American politics,” said Mr. Adegbile.

A divided court, for once

In the short term, the most important effect of the Brnovich decision may be its ramifications for the coming legal struggle over the many other new state voting provisions. The Department of Justice, for instance, has already filed suit challenging what it deems to be racially discriminatory provisions of Georgia’s new election law.

Narrowly speaking, the Department of Justice lawsuit should be unaffected by Thursday’s decision. It charges that some Georgia provisions are intentionally discriminatory, while the Arizona case involved provisions that the DNC claimed simply produced a discriminatory result.

But the Arizona ruling “is just going to make it a lot more difficult to lodge challenges to these practices,” says Professor Schwinn.

That’s significant in the current political climate, he says.

Professor Schwinn adds that in most major cases this term, the court has seemed to look for a minimalist approach, finding consensus around narrow issues, producing rulings not decided along predictable ideological lines.

That changed on Thursday, the court’s last day of issuing opinions. The Arizona case was decided via an ideological split that many experts predicted would develop after the conservative Justice Amy Coney Barrett replaced the late liberal Justice Ruth Bader Ginsburg.

“We expected to see more of these sharply divided 6-3 opinions that have a significant impact on the law,” says Professor Schwinn.