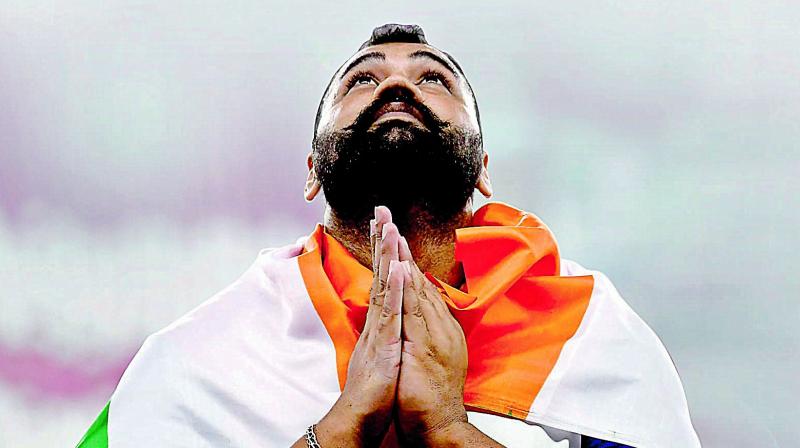 Patiala: Olympic-bound shot putter Tajinder Pal Singh Toor continued his impressive form as he produced yet another big throw while winning gold on the fourth and penultimate day of the National Inter-State Athletics Championships here on Monday.

Toor, who booked an Olympic ticket on last Monday with a national record throw of 21.49m during the Indian Grand Prix 4 here, came up with a best effort of 21.10m to win the gold in the event.

The Olympics direct qualifying mark is 21.10m, exactly the same distance he cleared on Monday, which meant that the Punjab shot putter has produced 21m-plus throw twice in a week.

Karanveer Singh, also from Punjab, was a distant second with a best throw of 19.33m while Vanam Sharma of Rajasthan took the bronze with an effort of 18.33m.

In the women's javelin throw, national record holder Annu Rani failed in her final bid at breaching the Olympics qualification mark as she could produce a best effort of 62.83m to win the gold.

Annu, who had won a silver in the 2019 Asian Championships besides a bronze in the 2014 Asian Games, began with 62.83m but all her remaining five throws were fouls.

The 28-year-old Punjab athlete is, however, expected to make to the Tokyo Olympics on the basis of world rankings.

She is currently sitting pretty at 19th spot in the Road to Tokyo list with 32 athletes to take part in the Olympics women's javelin throw event.

Her national record stands at 63.24m, which she had achieved in March at the Federation Cup here.