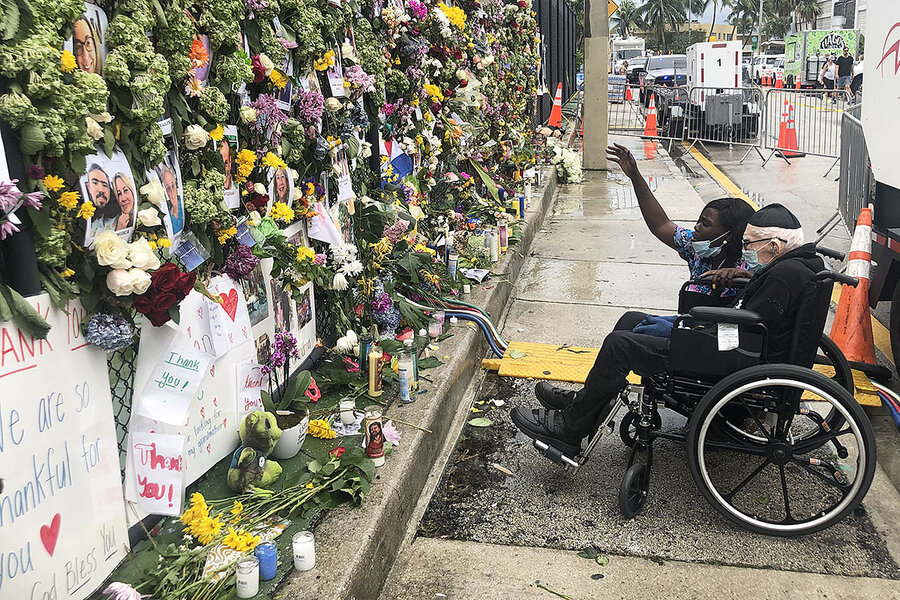 Felicia Roll is nearing tears as she approaches the makeshift memorial wall on Harding Avenue. The chain-link fence ahead is where family members and friends have posted photos of the missing, just two blocks from where Champlain Towers South collapsed last week.

She’s the caregiver for Jimmy Blair, a 103-year-old resident in another high-rise building near the ocean on Miami Beach, and as she pushes his wheelchair along the sumptuous array of flowers, together they look for the photo of one of Mr. Blair’s dearest family friends. He knew the woman from their days living in Brooklyn as members of a tightknit Orthodox Jewish community.

Mr. Blair hadn’t left his apartment for months, but even though it’s a cloudy, rainy day, he felt compelled to come. When they find the woman’s photo, Ms. Roll kneels next to him, takes his hand, and raises her other arm and begins to pray and weep.

The Surfside building collapse has brought people from across Florida and beyond to help, to mourn, and to support those grieving and in need.

“I was praying for those workers over there,” says Ms. Roll, who travels an hour each way to care for Mr. Blair. “Please, let them find at least one survivor.”

Mr. Blair, wearing a yarmulke, beckons a stranger near him. “What to do? What to do?” he says, his voice rasped with age and grief. “Everyone comes into this world, comes up against the world, and then leaves it. But God is great, and he blesses us, forever and ever. Amen.”

With more than 140 still missing under the rubble of tangled concrete and debris and 18 confirmed dead, it remains a time of grief and mourning in Surfside, Florida, as well as much of the nation.

“The waiting, the waiting is unbearable,” President Joe Biden told the families on Thursday, after he and the first lady, Jill Biden, placed a wreath of white flowers at the memorial fence and spent time speaking privately with family members.

In the midst of such numbing moments of despair, there’s also a deep-seated human instinct to find solace by gathering, and as the community here confronts such a sudden eruption of chaos and loss, many come to offer the smallest of gestures of beauty and hope.

Alex Calarino, a mechanic who also lives an hour away, rode his motorcycle down on Wednesday. “I just had to be here,” he said at the memorial wall. “I just wanted to pay my respects.”

The president, who lost his first wife and a daughter after an automobile accident in 1972, and then his oldest son to illness in 2015, told family members how maddening it can be when others, meaning well, attempt to say they know what grieving families feel.

“No matter what the outcome, the people you love, the people you may have lost, they’re going to be with you always – part of your soul, part of who you are,” the president said in a video posted by family members.

“Be patient with one another. Hang on. Hold on,” he said. “I don’t want you to feel like you’re being sucked into a black hole in your chest; there’s no way out. But there is.”

At the site of the collapse, officials ordered rescue workers to halt their efforts much of the day during the president’s visit, after concerns that parts of the building still standing might crumble. Rescue teams, including specialists from other states, as well as nations including Israel and Mexico, resumed their work late Thursday.

Moments of strength and weakness

Removing the concrete debris, piece by piece, even while still searching for survivors and human remains, is emotionally straining work – akin to soldiers who experienced the ravages of war, President Biden said.

“It’s so surreal,” says Brock Simmons, an intern with Hurst Jaws of Life in Shelby, North Carolina, which provides specialized tools for rescue workers. “I never thought I’d see anything like this.”

Mr. Simmons was on a sales trip with colleagues last week, hoping to observe and get some experience. But the trip was cut short and he and another Hurst employee rushed to Surfside after the complex collapsed. Now they are helping to supply new cutter and spreader tools used by Jacksonville Fire and Rescue, and providing service and repair for the older tools being used on what workers call “the pile.”

The team from Jacksonville had just completed a 12-hour shift on the pile from midnight to noon and were sleeping in the workers’ camp. “They’re all just exhausted – you can see how hard it is on them,” he says.

“A moment for all of us”

At the same time, amid such loss and devastation, there is also a deep-seated human instinct to help, and thousands of Miami residents and others around the country have felt impelled to offer what help they can give.

The partial collapse of Champlain Towers South last week was an intensely personal experience for Andreas King-Geovanis, and almost immediately he felt determined to do whatever he could to offer help for the surviving families who suddenly lost their homes.

A millennial entrepreneur and the CEO of Sextant Stays, which provides spacious accommodations for travelers as an alternative to hotels, Mr. King-Geovanis was born and raised in the New York borough of Manhattan. He was 11 years old on Sept. 11, 2001, living just a few blocks from the World Trade Center in Battery Park City.

“When that happened, we couldn’t go back to our home, just like these families,” he says. “My entire neighborhood was fenced off by the National Guard, and it was just such a chaotic scene. We spent the next month living in hotels or in friends’ houses on their sofas.”

His company was just about to open a new property in Sunny Isles Beach, a few miles north of Surfside. “We felt that we had a moral obligation to act and not sit on the sidelines, and watch and not just tweet out thoughts and prayers,” he says. “We knew that we were in a position to make a real impact.”

His company, which lists “empathy” and “community engagement” among its seven core values, is now hosting 15 of the families that lived in the partially collapsed complex.

He’s been overwhelmed, too, by the larger response of the community. Sports celebrities and others have helped provide over $10,000 in gift cards for the families, and each unit has been fully stocked with food and necessities. Anonymous donations of household items continue to be sent to his company’s warehouse.

“It hasn’t just been a singular effort, and though we were in a position to help, that’s not the focus,” Mr. King-Geovanis says. “This is a moment for all of us, and that’s why it has been so easy to rally everybody around one goal.”