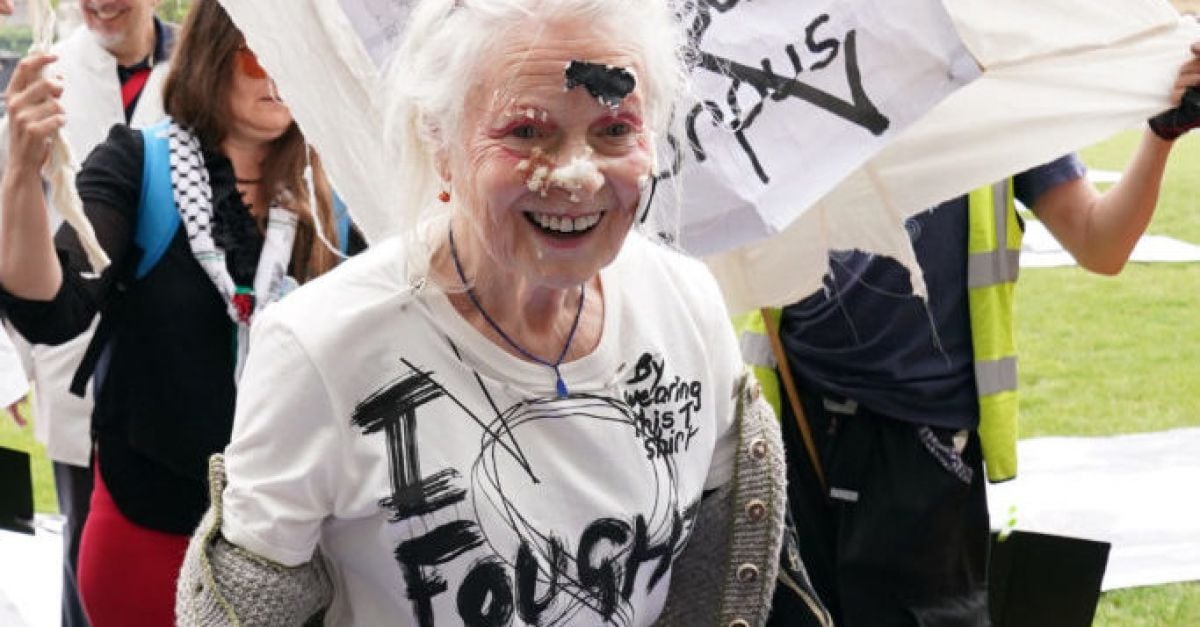 Vivienne Westwood was among supporters of Julian Assange who gathered in London’s Parliament Square on Saturday to mark the third birthday he has spent behind the bars of the UK capital’s Belmarsh Prison.

The event featured a giant picnic blanket stencilled with a Free Assange slogan, while the Australian’s partner Stella Morris and the couple’s two young sons, aged four and two, cut the cake.

Ms Westwood enjoyed her cake a little too much and was photographed with it all over her face.

The fashion designer is one of a number of Assange’s high-profile supporters who have thrown their weight behind the campaign to free him.

An attempt to extradite Assange to the United States was rejected in January, but he continues to be held in prison pending an appeal.

Earlier this week, campaigners sailed past the UK Parliament and the US Embassy calling for his release.

Ms Morris told the PA news agency that the US case had “sunk”, adding there is growing support across the world for the WikiLeaks founder to be released.

She said: “The longer this goes on the clearer it is that this is a political case. Julian should be at home with me and our two children.

“This has gone on far too long – it has to stop. He is not a criminal.”

Ms Morris has asked the authorities in Belmarsh if the couple can get married, saying it should be a right for anyone.

She hopes Assange will be granted permission to get married outside the prison.

“We will celebrate his birthday and have cake,” she added.

At a visit to Belmarsh Prison last month, her first for eight months due to Covid-19 restrictions, Ms Morris warned her partner’s life was at risk due to the pressures on his mental health in prison.

She said at the time: “They’re driving him to deep depression and into despair.”

“The jailing of a journalist by the UK (and the ongoing efforts by the US to extradite him) show these governments are determined to suppress inconvenient truths.”

Today Julian Assange will spend his 50th birthday in a maximum security prison. The jailing of a journalist by the UK (and the ongoing efforts by the US to extradite him) show these governments are determined to suppress inconvenient truths. #FreeAssange

A number of Australian politicians have appealed to the US government to drop its Espionage Act charges against Assange.

The MPs and senators urged US president Joe Biden to take the “opportunity for urgent reconsideration”, following a UK court’s decision to deny the US extradition request earlier this year.

John Rees, who organises events to keep up the pressure for Assange’s release, said: “Momentum is building across the world for our campaign.

“The case against Julian is collapsing.”