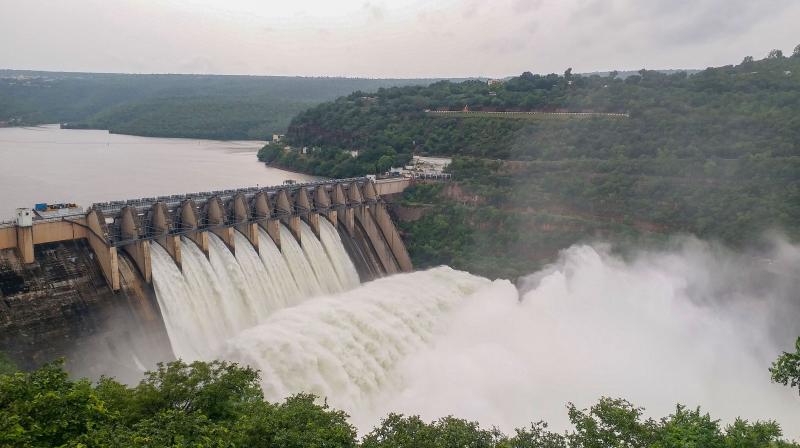 HYDERABAD: The Telangana state government rubbished the claims of the Andhra Pradesh government that it will face drinking water shortage if the former takes up hydel power generation at irrigation projects across river Krishna under the present circumstances with water levels in reservoirs reaching minimum levels.

The Andhra Pradesh government had complained to the Union jal shakti ministry and Krishna river management board (KRMB) again on Wednesday against Telangana government taking up hydel power generation up to 100 per cent of installed capacity.

The Telangana state government on Thursday filed a counter-complaint with the KRMB and Union jal shakti ministry claiming that the projects in AP under Pennar basin have adequate water reserves which can meet drinking water needs of AP and it is not dependent on Srisailam and Nagarjunasagar projects for drinking water at present.

The Telangana state government also raised objection over the KRMB directly writing a letter to TS Genco officials to stop hydel power generation against the established norms of writing to either the secretary or ENC (engineer-in-chief) of the irrigation department.

The Telangana state government also raised strong objections over the AP government repeatedly taking up the issue of drinking water problem in AP if Telangana government takes up hydel power generation in projects over Krishna.

The Telangana state government claimed that AP has projects which have storage capacity of 350 tmc ft in Pennar basin, of which there are 120 tmc ft of reserves at present which are more than sufficient to meet drinking water needs of that state. There are adequate reserves in Somasila, Kandaleru, Owk and Velugodu reservoirs in AP, it noted.

It pointed out that the Krishna tribunal had made temporary allocation of 512 tmc ft to AP but AP diverted an additional 250 tmc ft. The government made it clear that generating hydel power is its right to meet power demand in the state and it will continue power generation till the situation permits.