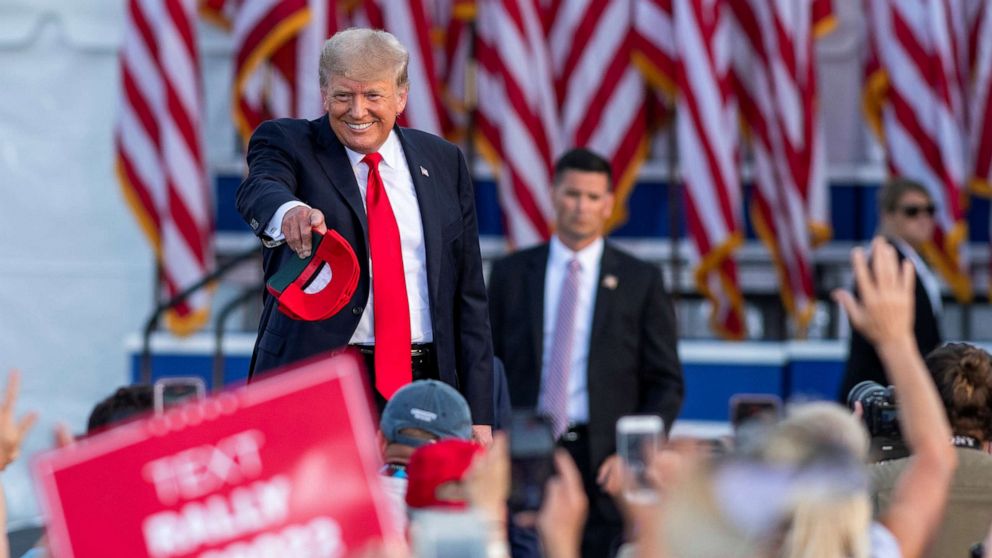 To many elected Republicans, former President Donald Trump is engaged in a post-presidential sideshow that they’d just as soon ignore.

“It’s entertaining, but it’s not real,” Sen. Mitt Romney said on CNN over the weekend, after Trump’s latest rally.

But Trump is making this period about something more consequential than entertainment. And outside events are converging to place the former president and his lies about the election front and center, at a time of serious legislative deal-making and with GOP primaries starting to take shape.

Trump is now openly warring with former Attorney General Bill Barr and Senate Minority Leader Mitch McConnell, after Barr spoke with ABC News Chief Washington Correspondent Jonathan Karl about Trump’s anger over his refusal to back up his lies.

The details provided by Barr come as the Department of Justice under President Joe Biden continues to sort out the legal fallout from the Trump era. The legal heat could increase at a more local level as soon as this week, with the Manhattan District Attorney’s office potentially filing criminal charges against the Trump Organization.

On Capitol Hill, the House is slated to vote Wednesday on a select committee on the events of Jan. 6 — a panel that could seek testimony from Barr, House Minority Leader Kevin McCarthy and a host of Trump aides and confidantes. House Speaker Nancy Pelosi, notably, has sent word that she might name a Republican separate from any McCarthy appointments.

Trump is going to keep feeding the news cycle, as will those around him. Barr’s interview with Karl is a reminder that a series of books — including Karl’s — are hitting shelves in the weeks and months to come.

Trump himself is touring the U.S.-Mexico border on Wednesday with Gov. Greg Abbott, R-Texas, who is vowing to use state funds to finish border-wall construction. He’ll have another rally Saturday in Florida, as he seeks to defeat GOP incumbents whom he perceived as disloyal.

Romney likened the current iteration of the Trump show to professional wrestling, where everyone knows it’s just a show. For the record, Trump was inducted into the WWE Hall of Fame in 2013.

The RUNDOWN with Quinn Scanlan

The Senate’s top Republican, however, is skeptical.

“(Biden) doesn’t control the Congress,” Minority Leader Mitch McConnell told reporters in Kentucky Monday. “The president’s promise to deal with it separately is nice but isn’t determinative unless the majority leader and the speaker agree.”

McConnell, who wouldn’t commit to supporting the bipartisan package, called on Biden to make sure Senate Majority Leader Chuck Schumer and Pelosi “follow his lead.” Otherwise, McConnell said Biden’s walk-back “would be a hollow gesture.”

Later Monday, Schumer only reiterated that he’s sticking with a “two-track” approach on the bills. And despite the president’s statement de-linking the two, White House officials seemed unable — or unwilling — to say one bill becoming law isn’t dependent on the other becoming law, too.

“I don’t think it’s a yes or no question,” senior adviser Cedric Richmond said on CNN Sunday when asked if Biden would sign the bipartisan bill if it arrived on his desk without the other. “We expect to have both bills in front of us to sign.”

And despite being asked several times, press secretary Jen Psaki on Monday also refused to say the president would sign just the bipartisan bill: “The president expects to sign each piece of legislation into law.” She also punted when pressed on how involved the White House would be with getting Democratic leadership on board with Biden’s clarified approach.

“It’s up to them to determine the sequencing of the legislation,” she said.

Though the For the People Act was blocked in the Senate last week, some Democrats — including former President Barack Obama — said that they’re not done with the voting reform bill or the issue of voting rights.

Speaking at a National Democratic Redistricting Committee virtual fundraiser on Monday afternoon, Obama said that he was confident Pelosi, Schumer and others could get an “up-and-down” vote on the act in the Senate. He also criticized Senate Republicans who voted unanimously not to open debate on the measure and said Democrats need to make sure Americans understand the stakes.

“What the Republicans can’t with a straight face claim, is that after we saw Jan. 6 — after you justified what culminated on Jan. 6 by suggesting that, you know, ‘our voters don’t feel like this vote is legitimate and we think there are all these questions that have to be answered and we’re suspicious etc.’ — look you can’t, then say, ‘Alright, well let’s do something about it,’ and then they say, ‘no we don’t want to talk anything about that.’ That can’t be right,” he said.

Pelosi also said that she’s not giving up on the bill, even though “we’re meeting some resistance in the Senate.”

In the Senate, Rules Chairwoman Amy Klobuchar announced a “field hearing” would be held in Georgia next month on recently enacted state legislation “to restrict voting” and the “need for basic federal standards to protect the freedom to vote.” Subsequent hearings on critical voting, campaign finance and ethics reforms will be announced later.

ABC News’ “Start Here” podcast. Tuesday morning’s episode features structural engineer Jason Borden, who examines what could have caused the building collapse in Surfside, Florida, and whether residents in surrounding buildings should be concerned. ABC News’ Sony Salzman explains why countries that have fared well against COVID are now considering strict lockdowns and whether vaccinated people will need booster shots in the near future. And ABC News Chief National correspondent Matt Gutman tells us how Oakland, California’s, police department is dealing with a surge in violent crime. http://apple.co/2HPocUL

FiveThirtyEight’s Politics Podcast. A bipartisan coalition of 10 senators, with the support of President Joe Biden, announced a $600 billion infrastructure plan last week. In this installment of the FiveThirtyEight Politics podcast, the crew discusses the value of a bipartisan strategy, the motivations behind it and the likelihood of Congress reaching a compromise. Science reporter Maggie Koerth also joins to talk about Republicans’ shifting attitudes on climate change. https://53eig.ht/3qDZmKv