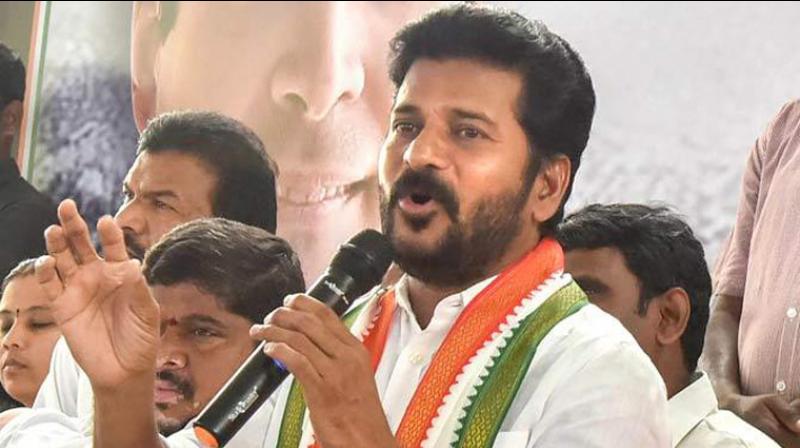 Hyderabad: TPCC president and MP A. Revanth Reddy called upon Congress activists to stone to death 12 Congress MLAs, who had defected to TRS. He said that he will personally take the initiative and pelt stones on them.

People voted against Chief Minister K. Chandrashekar Rao and elected 12 Congress MLAs in the last Assembly elections but the ruling party purchased them and showed disrespect to people’s mandate, he said.

As a courtesy call, Revanth Reddy visited the residence of AICC secretary Sampath Kumar, who is also the Maharashtra state party affairs in-charge. Revanth Reddy and Sampath Kumar are former MLAs from the undivided Mahbubnagar district.

Speaking to newsmen, the TPCC chief said that defection cases against Congress MLAs have been in the High Court for the last two years. Delayed judgment would become judgment denied and the High Court should pronounce its verdict early, he asked.

Assembly Speaker P. Srinivas Reddy should also take a decision at the earliest, he said. If the Speaker failed to do so, the Congress will go to court against him, he warned.

Revanth Reddy said that voters gave a fitting lesson to former Assembly Speaker S. Madhusudana Chary, who had vehemently misused his discriminatory powers on issues concerning defections. Revanth Reddy dared the 12 MLAs to resign from their posts and face a fresh mandate.

Speaking on the occasion, Chowdary said that an anti-Chandrashekar Rao tirade would start from Khammam. She said that the 12 defected MLAs would do a ghar wapsi soon.

She criticised both TRS and BJP governments for inept handling of Covid-19, which has killed lakhs of people. Steep hike in fuel and LPG prices was adversely affecting the people, she said.

Join us on Google News to keep up to date with the latest news
Tags
a. revanth reddy