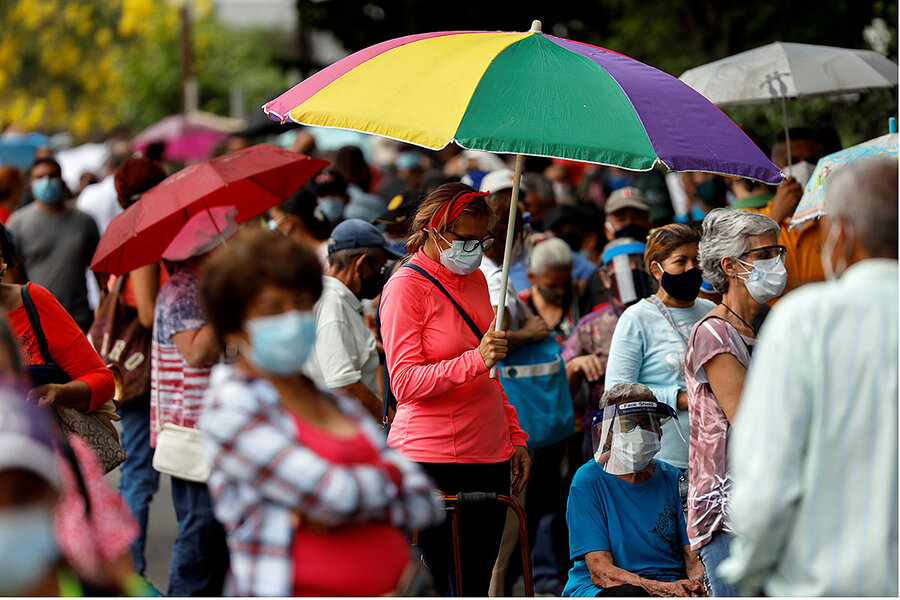 But are U.S. sanctions really to blame for the once-wealthy oil exporter’s minuscule vaccination rates, the long lines of vaccine seekers that form daily outside clinics with scant supplies, and the failure of millions of promised doses to arrive in the country?

The answer, says a growing chorus of public health experts and civil society representatives, is for the most part an emphatic “No.”

Instead, what they see is a beleaguered regime using the pandemic – and specifically sanctions that in some cases have deepened average Venezuelans’ misery – to sustain a narrative and maintain control over an increasingly desperate population of whom 1 in 3 are now food insecure and physically weakened.

“Maduro is motivated by his need for this speech that it’s the sanctions that are to blame for the people’s difficulties, especially those related to health,” says Julio Castro, an infectious disease expert and professor at the Central University of Venezuela.

“In the end, the main reason, unfortunately” for the slow arrival of vaccines in Venezuela “is this need to keep the discourse going,” adds Dr. Castro, who is also a member of the 25-member “technical table” charged with devising the country’s pandemic response. “This government discourse is always the same, that it’s the U.S., and also the European Union, that are blocking the vaccines and hurting the situation in Venezuela.”

Venezuela’s debate over who’s to blame for a pandemic response that has added a new dimension to an already staggering humanitarian disaster takes place against a backdrop of revived efforts to forge a political solution to the once high-flying country’s breathtaking collapse.

Prominent opposition figures have been in Washington this week drumming up support for all-factions-at-the-table negotiations to address the humanitarian crisis and eventually arrive at a political resolution through free and fair elections. At the same time, countries led by Norway are pledging to facilitate talks and support negotiated outcomes.

Still, international efforts to help Venezuela rise from its nadir – especially any involving the political opposition or emanating from the U.S. – are viewed with deep suspicion by Mr. Maduro.

Indeed, a key element of the Maduro discourse is a stark division between Venezuela’s international friends and enemies – with the U.S. and other Western powers placed on the “enemies” side of the ledger, and China, Russia, Cuba, Iran, and even Turkey making the “friends” list.

“This is true international cooperation, the brotherhood and friendship that we must demonstrate and be an example for other governments,” Venezuelan Vice President Delcy Rodríguez said in a state television address last week announcing a deal for 12 million COVID-19 vaccine doses from Cuba.

Those soothing words contrasted with the tenor of her comments last month expounding on government claims that U.S. sanctions were “blocking” Venezuela’s payments for vaccines from the international COVAX program.

“Rich countries have sabotaged this solidarity mechanism [COVAX] to distribute vaccines to the world,” she said. “Rich countries try to use the vaccines as an instrument of political blackmail.”

Such ideologically tinged discourse might be dismissed as baseless propaganda if it weren’t for at least one instance where U.S. sanctions halted Venezuela’s participation in the COVAX program. In that case, a Swiss bank held up a transfer of $10 million to complete Venezuela’s COVAX obligation, citing concerns about running afoul of U.S. law.

Medical supplies and assistance are specifically exempt from U.S. sanctions, but the bank was acting in a manner that financial experts refer to as “overcompliance” to eliminate any risk of being barred from U.S. financial markets.

And in what seemed a tacit acknowledgment that U.S. sanctions have affected some countries’ pandemic response efforts in unintended ways, the Biden administration last week took the unusual step of reiterating that sanctions do not affect COVAX participation and vaccine deliveries to three U.S.-sanctioned countries: Venezuela, Iran, and Syria.

What Venezuela can afford

Despite such cases, many Venezuelan public health experts say the overwhelming evidence underscores that the government is able to pay for vaccines – if it wants to.

“The Venezuelan government has the means to mobilize the amounts needed for COVAX participation, that is clear,” says Feliciano Reyna, a noted HIV/AIDS activist who runs a nongovernmental public health organization in Caracas. “My concern is more the political manipulation we’re seeing employed in the vaccine rollout. It doesn’t encourage the idea of Venezuelans working in unity to address the pandemic and solve our other problems.”

One need look no farther than the deals the government has sealed with its preferred partners, he says, for evidence it can afford the vaccines.

Indeed, in addition to last week’s accord with Cuba, Venezuela has worked out deals with China that make it the largest provider of vaccines so far (about 2 million). However, a much-touted deal with Russia that is supposed to deliver 10 million doses has so far delivered fewer than 1 million, prompting speculation in Venezuela over Russia’s production capabilities.

Moreover, all of these deals are being worked out, and the vaccines are being distributed, without the participation of the expert panel set up for that purpose, Dr. Castro says. The group hasn’t met for weeks, he says, while inquiries with the Ministry of Health about future meetings go unanswered.

At the same time, prominent opposition figures in Washington this week called for stepped-up U.S. diplomatic attention to Venezuela, arguing that the pandemic has been an additional avenue for Mr. Maduro’s “authoritarian friends,” including China, Russia, and Iran, to gain influence there.

“Whether we like it or not, those countries are there, and have a great deal of influence with the Maduro regime,” said Leopoldo López, a former Caracas-area mayor and democracy advocate who was imprisoned and held under house arrest for seven years before fleeing to exile in Spain in 2020. “That is why we need to bring in the United States and Europe as a counterweight.”

Appearing at a Wilson Center event Wednesday, Mr. López called for more robust U.S. involvement in addressing “this problem of a dictatorship in the heart of the American continent.”

“If the U.S. does not engage in the process” that some international players and democracy advocates are putting together, “there is no way the process will be successful,” he said. “That has been our main message to” the Biden administration and on Capitol Hill.

Yet no one expects an accord on a process of political negotiations anytime soon.

What the U.S. can do

In the meantime, public health advocates are calling for stepped-up attention to Venezuela’s humanitarian crisis. And even if U.S. sanctions aren’t the pandemic bogeyman Mr. Maduro would have them be, Mr. Reyna says there are critical steps the U.S. could take to alleviate Venezuelans’ suffering and “give some hope that conditions can improve.”

At the top of Mr. Reyna’s wish list: a comprehensive review by the Biden administration of the dozens of sanctions placed on Venezuela, to remove those that are contributing to an impoverished people’s hardships.

He cites for example sanctions that have curtailed diesel-fuel swaps – and as a result turned widely used diesel into a rare commodity feeding a black market and corruption.

Noting that public transport, hospitals and clinics, and farmers rely on diesel to continue operating. Mr. Reyna says “these are all areas where the impact of sanctions is felt most by average Venezuelans.”

The Biden administration, he adds, should not “fall into the trap” of thinking that reviewing and removing sanctions that are “hurting average people” means they’re “going soft” on Mr. Maduro.

On the contrary, Mr. Reyna says, “It would send a strong message to so many suffering people that the U.S. is thinking about Venezuela.”