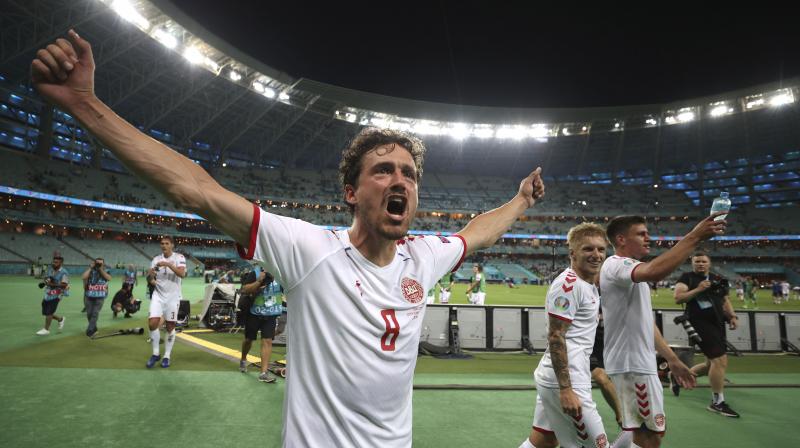 Baku: Denmark's fairytale run at Euro 2020 will continue into the semi-finals after they beat the Czech Republic 2-1 in Baku on Saturday to move into a last-four meeting with England or Ukraine at Wembley.

First-half goals from Thomas Delaney and Kasper Dolberg were enough to see Kasper Hjulmand's men through despite a second-half rally from the Czechs inspired by Patrik Schick's fifth goal of the tournament.

The Danes have now scored 10 goals in winning their last three matches after starting the tournament with two defeats, the first amid shocking circumstances when Christian Eriksen suffered a cardiac arrest on the pitch.

Three weeks on, they are dreaming of a repeat of 1992 when Denmark won the European Championship despite not even qualifying.

Then Yugoslavia's expulsion due to an outbreak of war gave them a second chance and they are playing like a side inspired by the emotion of Eriksen's collapse and recovery.

The Inter Milan midfielder was able to leave hospital after less than a week with a defibrillator fitted in his chest, but on the field Denmark have survived the loss of their star man for the past decade.

After playing all three group games in Copenhagen and in front of thousands of travelling Danish fans in Amsterdam in a 4-0 thrashing of Wales last weekend, only a small pocket of supporters could make the 4,000 kilometre trip to Azerbaijan.

Those that did make it were celebrating within five minutes as Delaney was left completely unmarked to head home Jens Stryger Larsen's corner.

Tomas Vaclik then had to deny Mikkel Damsgaard to prevent the Danes doubling their lead in a blistering start.

But the Czechs then came into the game and twice Kasper Schmeichel was forced into saves by Tomas Holes.

Denmark were always a threat on the break, though, and Vaclik had to stand up to parry another powerful drive by Damsgaard.

Vaclik was powerless three minutes before half-time when Joakim Maehle added another assist to his fine tournament with a teasing cross with the outside of his right foot that Dolberg smashed home from close range.

Czech boss Jaroslav Silhavy made two substitutions at the break and the introduction of Jakub Jankto and Michael Krmencik made an instant impact.

Krmencik stung the palms of Schmeichel before the Leicester goalkeeper was forced to turn Antonin Barak's shot behind.

But Denmark did not heed their warning as Schick latched onto Vladimir Coufal's cross to join Cristiano Ronaldo as the tournament's top goalscorer.

The Czechs' momentum soon fizzled out with both sides visibly jaded by their long journey east and the searing heat.

Vaclik kept his side in the game with a string of saves to twice deny substitute Yussuf Poulsen and then Maehle when one-on-one.

However, with Schick forced off by a muscle strain, Silhavy's men lacked the goal threat to trouble Denmark through six minutes of stoppage time.