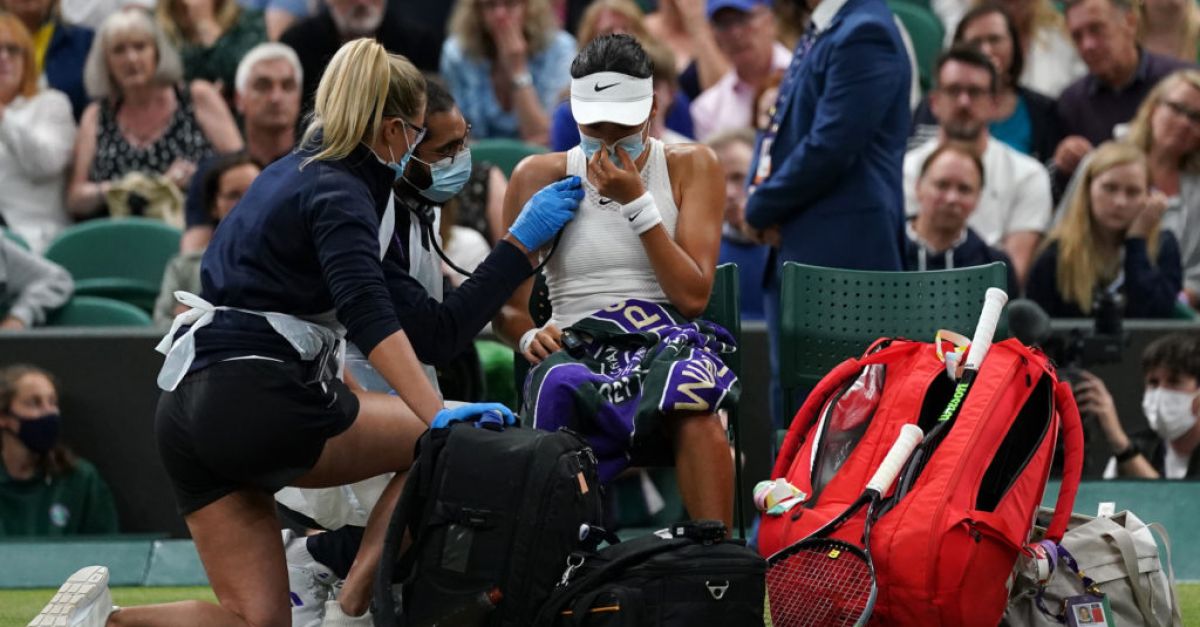 Emma Raducanu’s brilliant Wimbledon run came to a sad end in the fourth round when she was forced to withdraw during the second set of her clash with Australia’s Ajla Tomljanovic.

The 18-year-old, the youngest British woman to reach the second week at SW19 in the Open era, has become an overnight sensation and there were high hopes she could claim another win against 75th-ranked Tomljanovic.

But Tomljanovic withstood another barrage of power from the teenager to take the opening set 6-4 and move into a 3-0 lead in the second.

Due to medical reasons, Emma Raducanu has retired from this match – but what an incredible run to the fourth round it was 💚 💜#Wimbledon pic.twitter.com/fmp6M0twDw

Raducanu had been noticeably struggling to breathe and, after consulting with the trainer and doctor, she took a medical timeout where it was deemed she could not continue.

Raducanu’s elevated profile prompted a change to the usual schedule, with this match put third on Court One instead of second, which is the normal protocol ahead of the quarter-finals on Tuesday.

It was 8pm by the time the contest began under the roof, with an expectant crowd ready to cheer on the new home hero star.

Raducanu looked a little tight to start with – no surprise given the occasion and the fact she had had to wait around all day – but she saved a break point in her first service game and settled into the match.

Tomljanovic saved a break point at 3-3 as Raducanu began to pummel the sort of returns she produced against Sorana Cirstea, and she held for 4-4 with back-to-back aces.

Raducanu’s return was once again showing itself to be world class, although it was a mishit return that she thought had given her a break for 5-4 only for Tomljanovic to challenge and be proved correct.

The Australian, who was playing at an extremely high level, saved another break point and it was Raducanu who proved unable to hold onto her serve in the next game, a forehand over the baseline giving Tomljanovic the set.

Raducanu had looked to be battling to recover after a couple of long points and during the second game of the second set she went to the umpire to request the trainer.

She still had two chances to break the Tomljanovic serve and get back to 2-1 but it was clear at the change of ends that Raducanu was in some difficulty.

Despite the disappointing ending, it has been a career-launching fortnight for the teenager from Kent, who will climb to 175th in the rankings from her current mark of 338 and can look forward to many better nights to come.

Tomljanovic joins boyfriend Matteo Berrettini, who was watching courtside, in the quarter-finals having made it to the last eight of a grand slam for the first time.