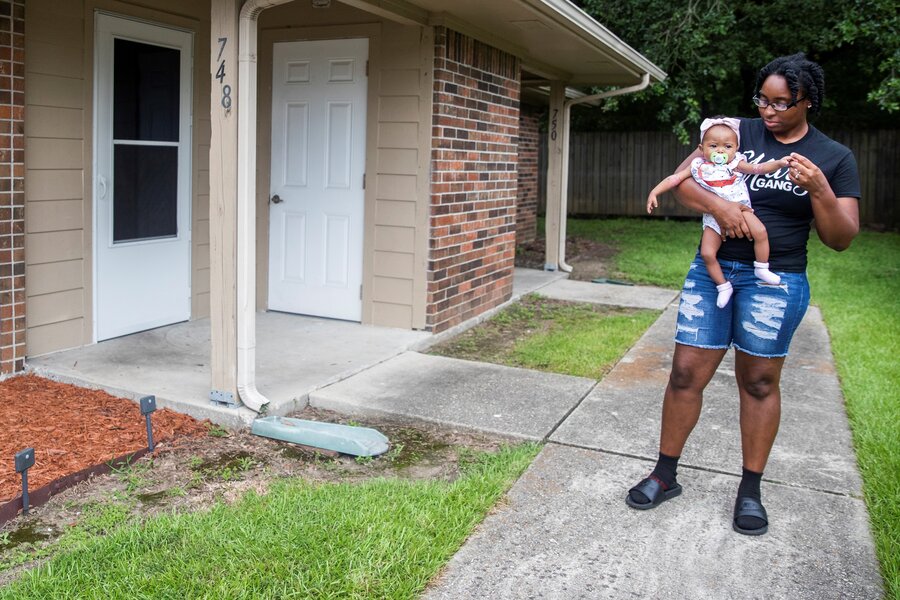 More than $7,000 behind on rent, Tyesha Young had hoped a program in Louisiana would bail her out and allow her family to avert eviction in the coming weeks.

But the mother of two from Jefferson Parish is still waiting to hear whether any of the $308 million available from the state for rental assistance and utility payments will give her a lifeline. She applied for money last year but never heard anything. She is waiting to hear on her latest application.

The federal money was divided between a Louisiana statewide program and its largest parishes. Neither has gone well. The state has paid out $10.5 million out of $147 million, while Jefferson Parish has only distributed $1.4 million out of $12.9 million. The parish replaced the company overseeing the program after only $236,000 was handed out by May.

“Where are we going to go?” asked Ms. Young, who lost her hospital job during the pandemic and now must stay home to care for her 7-month-old.

“This is all new, not something I thought I ever would have to deal with in my life,” she said. “I have two children to think about. It’s a lot.”

Louisiana’s struggles are playing out across the country as states rush to distribute nearly $47 billion allocated by Congress for emergency rental assistance before a federal eviction moratorium ends July 31, putting millions at risk of losing their homes.

The historic amount – more than the Department of Housing and Urban Development’s annual budget – was allocated in December and March.

Housing advocates blame the slow rollout partly on the Treasury Department under former President Donald Trump that they say was slow to explain how the money could be spent. The criteria, while clearer under the Biden administration, was still criticized for a burdensome process that seemed more focused on preventing fraud than helping tenants.

Advocates also said states made things worse – some waited months to set up programs and others created bureaucratic hurdles.

As a result, little money has gone out. According to data released Friday from the Treasury Department, only $1.5 billion was provided to about 350,000 households by May 31. That’s less than 4% of the money allotted.

Missouri Rep. Cori Bush, a Democrat who has herself experienced eviction, said her office has received calls from families “who either don’t know how to apply for the funds or who say the application is confusing and stressful.”

“It’s unconscionable that millions of dollars are sitting in the state’s bank account, while families … across Missouri are struggling to stay in their homes,” she said.

Some 3.4 million people could face eviction in the next two months, according to the latest U.S. Census Bureau’s Household Pulse Survey – a number some advocates say could be twice that.

Many tenants will be forced out into a red-hot housing market where prices are rising and vacancy rates plummeting. They also will be stuck with eviction and delinquent back-rent records that make it almost impossible to find new housing, leaving many to turn to homeless shelters or find dwellings in low-income neighborhoods without good schools and access to transportation and jobs.

Among those at risk is Freddie Davis, a Miami truck driver who lost his job during the pandemic and saw his rent increase from $875 to $1,400-a-month. He is $7,000 behind on rent and fears his monthly $1,038 disability check after he lost a leg won’t be enough to find another place. He applied for rental assistance, but his landlord refused to take it.

“I’m worried as hell. I don’t have no other place to go,” said Mr. Davis, who has worked since he was 15 and never before been evicted. “In Miami, rent is sky-high. I am going to sleep in my truck and put all my stuff in storage.”

The National Low Income Housing Coalition found that of the 51 programs it has tracked so far, just 14% of funds allocated in December had been distributed. Most states aren’t yet distributing the March money.

The hurdles vary, according to a Housing Coalition survey in April, including lack of capacity to administer the program, technical difficulties setting it up, and lack of cooperation from tenants and their landlords.

Some landlords refused to participate. Tenants sometimes didn’t complete applications – often because they were required to provide proof of lost jobs or other financial hardship during the pandemic.

Some of the same problems emerged last year when states set aside nearly $2.6 billion from the CARES Act for rental assistance.

A common refrain was that federal requirements were too onerous and the guidelines too stringent.

Erica Boggess, executive director of the West Virginia Housing Fund, which runs the state’s rental assistance program, called it “time consuming” in explaining why it had distributed only $8.7 million of $200 million from the first round of funding.

“It’s labor intensive,” Ms. Boggess said of requirements that include verifying a COVID-19 hardship and documenting an applicant’s income before going to a landlord for acceptance of the funds.

“It’s frustrating for the tenant and probably landlords as well,” she said. “We have to go through the process. It’s just not something that can happen overnight.”

California has made changes to its lengthy application, which could take three hours to complete. It reduced the number of required documents from as many as nine to as few as one; now it takes 30 minutes to fill out. It also expanded the languages on the program website from two to six.

Russ Heimerich, a spokesman for California’s Business, Consumer Services, and Housing Agency, said the state initially followed Treasury rules aimed at preventing duplication of benefits and ensuring applicants were entitled to what they got. “Now we simply rely on a tenant’s attestation that they had a COVID-19 financial hardship,” he said.

Since March, the Treasury Department has required money to go directly to tenants, among other streamlining moves, and urged landlords be barred from evicting tenants for up to 90 days after the period covered by assistance.

“We need relief distributed now, before the eviction moratorium expires at the end of July,” Susan Rice, director of the White House Domestic Policy Council, said this week. “Renters at risk of eviction are desperate for that relief, and landlords need to cover their bills.”