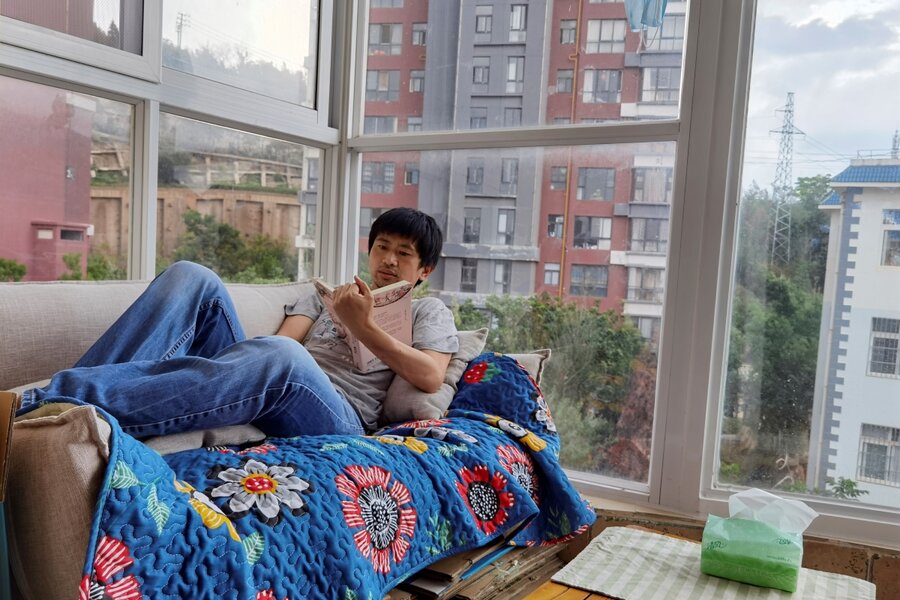 Fed up with work stress, Guo Jianlong quit a newspaper job in Beijing and moved to China’s mountain southwest to “lie flat.”

Mr. Guo joined a small but visible handful of Chinese urban professionals who are rattling the ruling Communist Party by rejecting grueling careers for a “low-desire life.” That is clashing with the party’s message of success and consumerism as it celebrates the 100th anniversary of its founding.

Mr. Guo, 44, became a freelance writer in Dali, a town in Yunnan province known for its traditional architecture and picturesque scenery. He married a woman he met there.

“Work was OK, but I didn’t like it much,” Mr. Guo said. “What is wrong with doing your own thing, not just looking at the money?”

“Lying flat” is a “resistance movement” to a “cycle of horror” from high-pressure Chinese schools to jobs with seemingly endless work hours, novelist Liao Zenghu wrote in Caixin, the country’s most prominent business magazine.

“In today’s society, our every move is monitored and every action criticized,” Mr. Liao wrote. “Is there any more rebellious act than to simply ‘lie flat?’”

It isn’t clear how many people have gone so far as to quit their jobs or move out of major cities. Judging by packed rush-hour subways in Beijing and Shanghai, most young Chinese slog away at the best jobs they can get.

Still, the ruling party is trying to discourage the trend. Beijing needs skilled professionals to develop technology and other industries. China’s population is getting older and the pool of working-age people has shrunk by about 5% from its 2011 peak.

“Struggle itself is a kind of happiness,” the newspaper Southern Daily, published by the party, said in a commentary. “Choosing to ‘lie flat’ in the face of pressure is not only unjust but also shameful.”

The trend echoes similar ones in Japan and other countries where young people have embraced anti-materialist lifestyles in response to bleak job prospects and bruising competition for shrinking economic rewards.

Official data show China’s economic output per person doubled over the past decade, but many complain the gains went mostly to a handful of tycoons and state-owned companies. Professionals say their incomes are failing to keep up with soaring housing, child care, and other costs.

In a sign of the issue’s political sensitivity, four professors who were quoted by the Chinese press talking about “lying flat” declined to discuss it with a foreign reporter.

“We generally believe slavery has died away. In fact, it has only adapted to the new economic era,” a woman who writes under the name Xia Bingbao, or Summer Hailstones, said on the Douban social media service.

Some elite graduates in their 20s who should have the best job prospects say they are worn out from the “exam hell” of high school and university. They see no point in making more sacrifices.

“Chasing fame and fortune does not attract me. I am so tired,” said Zhai Xiangyu, a 25-year-old graduate student.

Some professionals are cutting short their careers, which removes their experience from the job pool.

Xu Zhunjiong, a human resources manager in Shanghai, said she is quitting at 45, a decade before the legal minimum retirement age for women, to move with her Croatian-born husband to his homeland.

Thousands vented frustration online after the Communist Party’s announcement in May that official birth limits would be eased to allow all couples to have three children instead of two. The party has enforced birth restrictions since 1980 to restrain population growth but worries China, with economic output per person still below the global average, needs more young workers.

Minutes after the announcement, websites were flooded with complaints that the move did nothing to help parents cope with child care costs, long work hours, cramped housing, job discrimination against mothers, and a need to look after elderly parents.

Ms. Xia writes that she moved to a valley in Zhejiang province, south of Shanghai, for a “low-desire life” after working in Hong Kong. She said despite a high-status job as an English-language reporter, her rent devoured 60% of her income and she had no money at the end of each month.

She rejects the argument that young people who “lie flat” are giving up economic success when that’s already is out of reach for many in an economy with a growing gulf between a wealthy elite and the majority.

“When resources are focused more and more on the few people at the head and their relatives, the workforce is cheap and replaceable,” she wrote on Douban. “Is it sensible to entrust your destiny to small handouts from others?”

Mr. Guo, the writer in Dali, said he puts in more hours as a freelancer than he did at a newspaper. But he is happier, and life is more comfortable: He and his wife eat breakfast on their breezy sixth-floor apartment balcony with a view of trees.

A handful who can afford it withdraw from work almost entirely.

A 27-year-old architect in Beijing said she started saving as a teenager to achieve financial freedom.

“From last September, when I saw all my savings had reached 2 million [yuan, i.e. $300,000], I lay down,” said the woman, who would give only the name Nana, in an interview over her social media account.

Nana said she turned down a job that paid 20,000 yuan [$3,000] per month due to the long hours and what she saw as limited opportunities for creativity.

“I want to be free from inflexible rules,” said Nana. “I want to travel and make myself happy.”