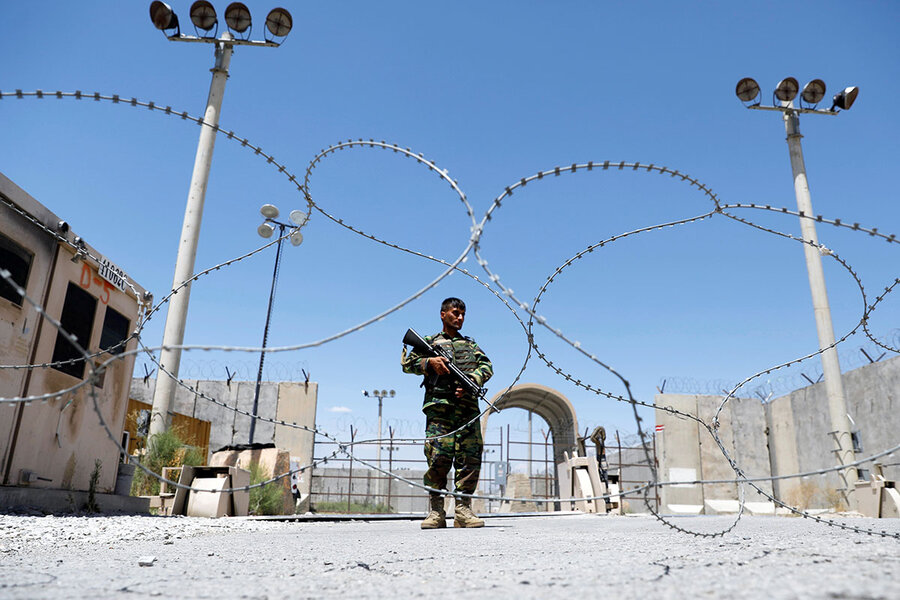 And just last month, the acting assistant secretary of defense for the region, David Helvey, assured lawmakers that in the midst of the withdrawal, the Pentagon is doing its best to make sure the country “cannot again become a safe haven for terrorists who threaten our security.”

But while it has reached near-mythic status in U.S. military culture, the threat of violent extremists creating another safe haven in Afghanistan – particularly when used to justify prolonged U.S. troop presence – is overblown, analysts increasingly argue. And though concerns about the fate of women, their children, and military interpreters in the face of potential Taliban rule are very real, the menace of terrorist sanctuary may be one area, at least, in which Americans with an interest in the war’s outcome might rest a bit more easily, they add.

For starters, the 9/11 attacks didn’t happen because Al Qaeda had a safe space in Afghanistan, but rather because the U.S. failed to implement effective homeland security measures – a series of tragic oversights that have long since been remedied, argues retired Lt. Col. Daniel Davis, now a senior fellow at Defense Priorities, a Washington think tank.

“Americans have been warned repeatedly over the years that the quote ‘loss’ of Afghanistan is going to result in a terrorist safe haven and have disastrous consequences for U.S. security. There are 72 designated foreign terror organizations in vast areas all over the globe, and you’re telling me that our country is being kept safe by having 2,500 troops in Afghanistan?” he says. “Somebody’s got to pull out the flag and say it’s just not logical.”

True, in the late 1990s, Afghanistan was “quite remarkable” in terms of “tremendous freedom of action” for terrorist groups, says Daniel Byman, senior fellow at the Brookings Institution. “There was money, specialized training – more than just target practice,” as well as “bureaucratic potential,” which might involve leaders crossing paths with, say, a would-be fighter speaking excellent French. They could buttonhole him, thinking, “‘Oh, we can use him in an operation in a French-speaking country,’” Mr. Byman notes.

For the most part, though, rather than painting a picture of an around-the-water-cooler sort of planning synergy forged in Afghan training camps, the 9/11 Commission Report notes that attack mastermind Khalid Sheikh Mohammed hatched the idea of using aircraft as weapons while sharing an apartment in Manila, Philippines, with his nephew, who also enjoyed planning terrorist attacks.

While Osama bin Laden did initially invite him to move to Afghanistan, KSM, as he is sometimes known, declined early on, preferring to remain an independent freelancer of plots while traveling from Brazil to India to Indonesia and back. It was in Karachi that KSM taught potential hijackers how to read phone books, interpret airline timetables, use the internet, and make travel arrangements. They also played a lot of computer games, the commission report adds.

While the 9/11 attackers used box cutters as their weapons of choice, it’s certainly undesirable to have terrorists practicing shooting maneuvers and mass-attack techniques in safe havens. But such places have become far easier to spot and strike.

Even before 9/11, U.S. officials had little problem knowing where Mr. bin Laden was, and they had a number of chances to kill him, though they chose not to. Since then, the U.S. ability to locate and strike terrorists, even those hiding in remote locations, has only improved, thanks to multibillion-dollar reconnaissance, surveillance, and intelligence systems, including drones.

It’s also unclear that the Taliban would allow Al Qaeda the chance to hide out in Afghanistan. There’s considerable intelligence showing that the Taliban were not cheering Al Qaeda’s terror attacks but rather asking “What’s going on with them?” says Mr. Byman. But if they do, the U.S. can strike them. Allowing Al Qaeda sanctuary is also the one thing that might bring the Biden administration back into the country, which the Taliban do not want.

In the meantime, and even more important, the U.S. has become quite good at monitoring terrorist movements, and it partners with other countries who are too, Mr. Byman notes. If Moroccan police disrupt a terrorist plot, for example, they might share a Parisian mobile number used by a plotter with French authorities, who may in turn trace money transfers from the owner of that phone to Saudi Arabia, which they then share with Saudi authorities. “Most counterterrorism is global intelligence cooperation,” he says. “It’s just massive sharing throughout.”

These measures have sent terrorist networks underground. “It’s made it dangerous to talk on the phone, use emails, gather in large groups – and without that it’s tough to run a global clandestine organization,” Mr. Byman says. During the Syrian War, Al Qaeda leader Ayman al-Zawahiri was getting messages from subordinates along the lines of “What’s going on? You haven’t answered your emails for three months,” he notes. “All that hunting makes them a much less relevant organization.”

During his House Armed Services Committee testimony in May, Mr. Helvey alluded to these U.S. capabilities. “We’ve learned a lot over the past 20 years in how to address transnational terrorist threats,” he said. “I mean, you know that every time you take a commercial flight or open a bank account, there’s a lot of things we’ve been able to do across the government to better understand, prosecute, and characterize those terrorist threats.”

Given this, Lieutenant Colonel Davis is puzzled by concerns that withdrawing troops from Afghanistan could open the door to terrorist attacks on America, particularly as he thinks back to his time traveling the country as chief of the rapid equipping force during the height of the surge.

It was out on a foot patrol with an infantry platoon in dangerous and far-flung Kunar province that Lieutenant Colonel Davis began to question the concept that troops were keeping America safe by disrupting terrorist safe havens. “We were trekking up the side of a mountain, and this lieutenant says, ‘We control maybe 100 meters on either side of this goat trail.’ Then he corrected himself. ‘We periodically influence 100 meters on either side.’”

Along the way, the troops passed locals eying them. “Those guys could’ve been the biggest terrorist commanders that ever existed. They could have been actively discussing a plot to attack America, and we never would have known it,” Lieutenant Colonel Davis says. “The idea that it was our patrol stopping a terrorist attack on America was laughable.”

Beyond that, such narratives obscure some very positive counterterrorism developments since 9/11, he adds. “There’s been a real success story for the U.S. in being able to keep us safe no matter where these divergent threats come from. The frustrating part to me is that we haven’t translated that to say, ‘So now why do we need troops on this one tiny stretch of dirt in Afghanistan?’”