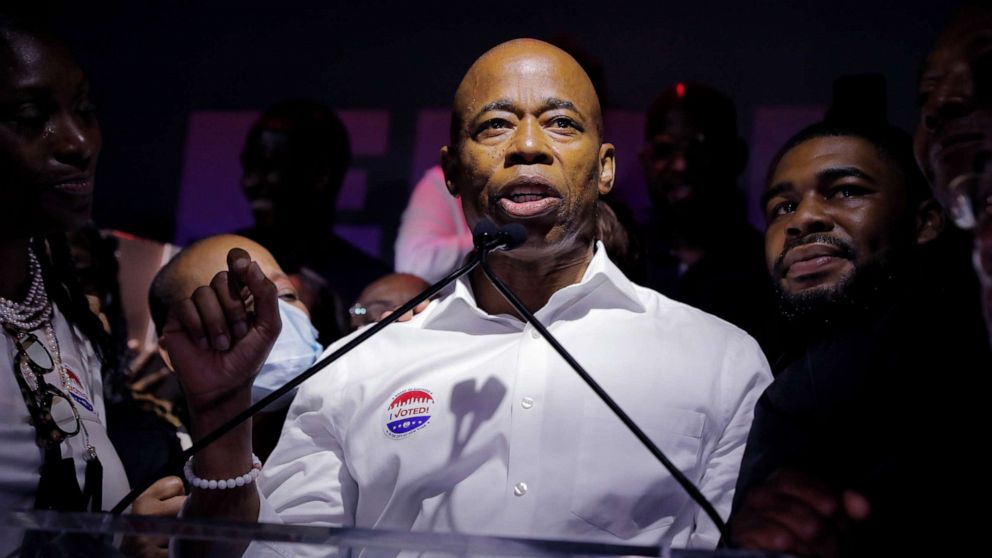 The New York City Board of Elections released an updated unofficial count of ranked choice votes on Wednesday afternoon, after candidates and officials sharply criticized the BOE for counting over 130,000 test votes in an initial release of vote tallies for the city’s ranked-choice Democratic mayoral primary.

Wednesday’s count showed Eric Adams holding 31.8% of the vote in the first round, with Maya Wiley following with 22.2% and Kathryn Garcia third with 19.3%.

But by the eighth round, with all of the other candidates eliminated and their votes allotted to others, Garcia led Wiley by only 347 votes.

“While we remain confident in our path to victory, we are taking nothing for granted and encourage everyone to patiently wait for over 124,000 absentee ballots to be counted,” Garcia said in a statement on Wednesday night.

As of Wednesday evening, the BOE has received over 125,000 absentee ballots, none of which are included in the unofficial count.

“Yesterday’s ranked choice voting reporting error was unacceptable and we apologize to the voters and to the campaigns for the confusion,” the BOE said in a statement released alongside the updated figures.

The Board of Elections removed the initial results from its website late Tuesday, and tweeted a statement around 10:30 p.m. ET that admitted to including test votes in the released figures.

“When the cast vote records were extracted for the first pull of RCV results, it included both test and election night results, producing approximately 135,000 additional errors,” the BOE said. It committed to removing the test votes and accurately recounting.

Common Cause New York Executive Director Susan Lerner said on Tuesday that “a mistake by a low-level junior staffer” caused the miscount.

After the Board of Elections’ admission, Adams struck a conciliatory tone.

“We appreciate the Board’s transparency and acknowledgement of their error,” Adams said in a statement late Tuesday. “We look forward to the release of an accurate, updated simulation, and the timely conclusion of this critical process.”

He had initially questioned the results, with Wiley going further in criticizing the board.

“This error by the Board of Elections is not just [the] failure to count votes properly today, it is the result of generations of failures that have gone unaddressed,” Wiley said in a statement on Tuesday night. “We have once again seen the mismanagement that has resulted in a lack of confidence in results … because those who implement [election laws] have failed too many times.”

Garcia called the count error “deeply troubling” and said it “requires a much more transparent and complete explanation.”

“I am confident that every candidate will accept the final results and support whomever the voters have elected,” she said in a statement on Tuesday night.

Mayor Bill de Blasio told reporters on Wednesday morning that what happened is “indicative of the fact the Board of Elections is broken, structurally broken. I don’t know how many times we are going to have this conversation. We can no longer have a partisan Board of Elections.”

Representatives from both the Democratic and Republican parties sit on the Board.

Lerner called for reforming the Board as well, adding: “The system is designed for the 19th century, and we need to bring it into the 21st century.”

“It’s like a rookie mistake,” Rob Richie, president and CEO of FairVote, a nonpartisan organization advocating for voting reforms, said in an interview with ABC News. “Every voting equipment process has to be tested, and it’s a very elementary part of it, which is you clear the data after you do your tests.”

The Board of Elections has faced scrutiny before for election errors. Last September, it erroneously mailed at least 100,000 absentee ballots with incorrect names and addresses.

Richie said that ranked-choice voting itself, which New Yorkers experienced for the first time in the primary, is not to blame, and next time the BOE could possibly run daily vote tallies and accept additional support from developers of the tabulation software.

“I think a lot of people would have expected it to be lucky to get turnout [like] what we got eight years ago, when Bill de Blasio ran,” Richie said. “Well, it’s much bigger than that, right? It’s like more than 25% more votes.”