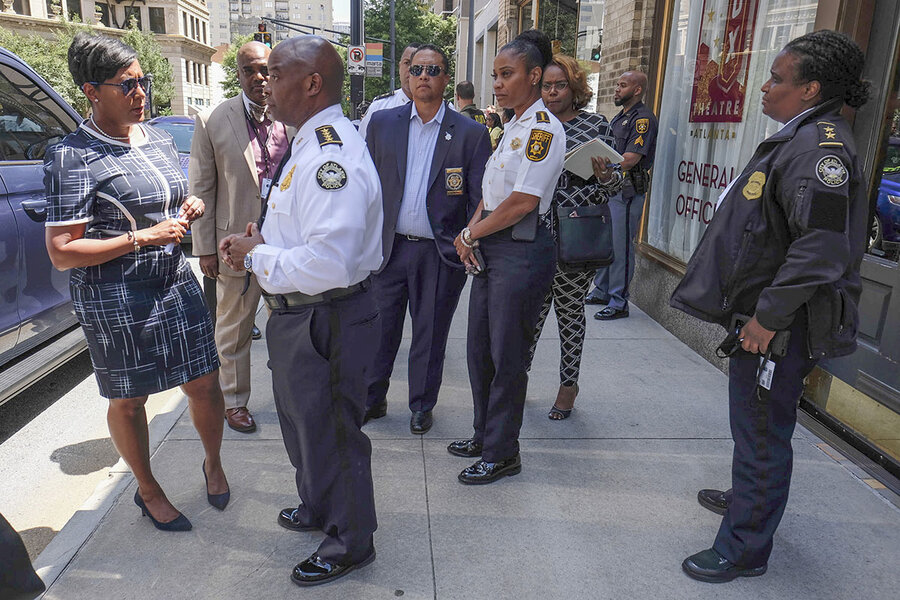 Her mission: Convince residents that, if core social and economic inequities were resolved, crime would abate and the city wouldn’t need a police department.

Less than a year ago, amid massive social justice protests across the United States, the idea of fundamentally reducing the role of police rose from nonstarter to distinct possibility.

As momentum to defund the police dissipates, a view from Atlanta suggests more than a crime-fueled backlash. There’s acknowledgment of the good police do, even amid urgent calls to improve.

Minneapolis voters will in November consider whether to replace the Minneapolis Police Department with a new Department of Public Safety, which would include some component of law enforcement. New York cut $1 billion from the nation’s largest police force. Atlanta came within one city council vote of cutting $72 million from its police department.

Today, however, that momentum has almost completely reversed. Ms. Bond says there has been “a doubling down on policing, increasing surveillance, and building a massive training center, which is in such stark contrast to the conversation we were trying to begin over the summer. What happened? What changed?”

The simple answer is crime. Like other cities, Atlanta has witnessed a new crime wave – bad enough that one affluent part of the city is considering secession. Yet in talking to residents across Atlanta, even those sympathetic to the defund movement now say it overreached. The way forward, many say, is not in getting rid of the police, but helping them do a better job.

“‘Defund the police’ was a slogan that really backfired … because across the country – not only in Atlanta – people living in those neighborhoods who aren’t necessarily activists don’t want the police gone, especially with crime spiking,” says Ron Bayor, a historian at the Georgia Institute of Technology. “What people do want is police reform.”

The question of how hard to push police hit home quickly for Atlanta. The killing of Rayshard Brooks a few weeks after George Floyd’s murder further fueled protests, and Mayor Keisha Lance Bottoms immediately called for the arrest of the officer.

The response from local cops: 170 officers called out sick as morale plummeted. In the past year, more than 200 officers have left the force and only 60 have been hired. Arrests nose-dived in the months after the protests, according to internal Atlanta Police Department records provided to the Monitor last year.

For Risaiah Osborne, a 20-something student who lives near where Mr. Brooks was killed, gunfire has been a weekly occurrence outside his home.

A participant in last year’s protests, he says, “the movement was growing and growing – and then it just died.”

He admits his own personal evolution is part of it. Though he believes that the city can invest more resources into its toughest neighborhoods, he says, “the fact is, defund the police was never a winning message. Without the cops, I know folks would be up running into my house.”

He now believes the answer is what he saw during an afternoon run. He spotted two Black officers on bicycles, talking to locals. “As a Black man, I just breathe a little easier when I see cops that look like me. It’s easier to stop and talk.”

“The more I think about this, I think we need to change American culture more than we need to change the cops,” he says. “If you think about sports, it feels like this country is a losing team right now. It’s not the players who need to be changed. It’s the culture and the values of the team.”

The crime spike has had a political impact, here and beyond. Mayor Lance Bottoms recently announced, with few details, that she was not seeking a second term. In New York City, front-runner Eric Adams, a former officer who wants to see more officers on the street, took a strong early lead in the city’s working-class boroughs while struggling in Manhattan.

Last year, nine city council members in Minneapolis stood on a stage set with a “defund the police” banner. Voters will face one charter proposal in November that would eliminate the department altogether.

But Mayor Jacob Frey has put forward his own proposal. He wants to reduce traffic stops, boost internal affairs, and give rank-and-file officers the power to intervene when they see professionalism slip among other officers. Yet crucially, Mayor Frey also wants to build the decimated department back to its full 888 members by 2023.

“If we were having [the defund] discussion when violent crime was kind of at historic lows, it would be a different debate,” says Wesley Skogan, author of “Community Policing: Can it work?” “The question now is: ‘What am I, as the mayor, going to do right now?’ Fixing the police and getting them paid enough and getting them deployed smartly by tomorrow night is what you come back to.”

For her part, Ms. Bond, the activist, worries that police were able to change the conversation by not doing their jobs.

“If you claim to be somebody who cares about public safety and keeping communities safe, and then you fail to show up just because you’re having a bad day, well, what would happen if a teacher did that or a doctor?” says Ms. Bond of Defund APD, Refund Communities (DARC). “It takes a lot of audacity and sense of self-importance to say that you stand for one thing and then not show up to supposedly do that thing.”

But those dynamics only illustrate that police reform is about more than “hard, green dollars,” says Robbie Friedmann, a policing expert at Georgia State University. When a profession that is ostensibly built on service and honor is cast as immoral, the consequences can be severe.

“What the implications are is that officers are resigning, they’re retiring early, and new cadets are not coming in at the numbers police need them,” says Mr. Friedmann, who runs an international police officer exchange program. “When you erode the moral basis of police authority and police deterrent powers, that is a boomerang [that is] counterproductive to policing itself and detrimental to the society that we live in.”

Those stakes are on full display in the Buckhead neighborhood. Atlanta annexed Buckhead in the 1950s in a bid to bring economic and racial diversity to a largely Black city. Today, Buckhead is part of the urban-suburban coalition in Georgia that elected Joe Biden and two Democratic senators in 2020. But some in the area want to secede from Atlanta.

In the past year, Buckhead has seen robberies increase by 39%, aggravated assaults by 52%, and larceny by 40%. If Buckhead seceded, it would take 40% of Atlanta’s tax base.

“It would destroy Atlanta,” says Mike Gunter, a record store clerk who has lived and worked in Buckhead for 40 years.

Mr. Gunter links the secession movement directly to the defund movement and mayor’s crackdown on policing. He points to a no-chase policy instituted under Mayor Lance Bottoms that has allowed street racers to tear up the streets with impunity, setting a lawless tone.

“We’ve had crime waves before,” he says. “But nothing quite this sustained and intense.”

Yet secession is a terrible idea, he says. “Let’s be clear: The annexation of Buckhead was about race. But this is not about race. It’s about crime and equitable policing. All our neighborhoods should be equally safe, and it’s up to the city to make that happen. But secession would be counterproductive.”

Leaders in Atlanta now are trying to address these concerns. Officers have received a $2,500 bonus for staying put. The proposed police budget is up significantly. And city leaders want to incorporate new ideas and protocols for officers at a proposed police training center.

“We need more of them”

The shift seems to reflect a prevailing attitude among residents, including Ted Jamison, a retiree out cleaning his truck in the Edgewood neighborhood.

To Mr. Jamison, the defund idea became a starting point in a necessary negotiation. But as an answer to the city’s problems, it falls short, he says. After all, “it’s not the police who are committing all this crime,” he notes.

He wants a strong, but respectful police force trained to de-escalate conflict, and focused on tackling serious criminality before it gets worse.

Despite prominent and tragic confrontations between police and the Black community, there has been progress, says Professor Bayor, author of “Race and the Shaping of Twentieth-Century Atlanta.”

“Police are much better here than they were years ago. There’s diversity in terms of people and practice,” he says. “But you’ve had a few outstanding incidents where the violence could have been de-escalated and nobody had to be shot. That’s what police have to work on.”

The Atlanta retiree carries her ID in a shoulder bag just in case police approach her and her friends as they hang out in a park in the Mechanicsville neighborhood.

“Sometimes it’s annoying to be hassled by them, and sometimes they threaten you with a ticket,” she says. “But they are just doing their job. They are keeping watch. They are protecting us. I’m old, but I’m a tough lady. Ain’t nobody going to rob me, if I can help it. But I don’t think we need fewer cops. We need more of them.”

As for officers who break the law, discriminate and hurt, even kill, people without reason, she says: “That’s what lawyers are for.”