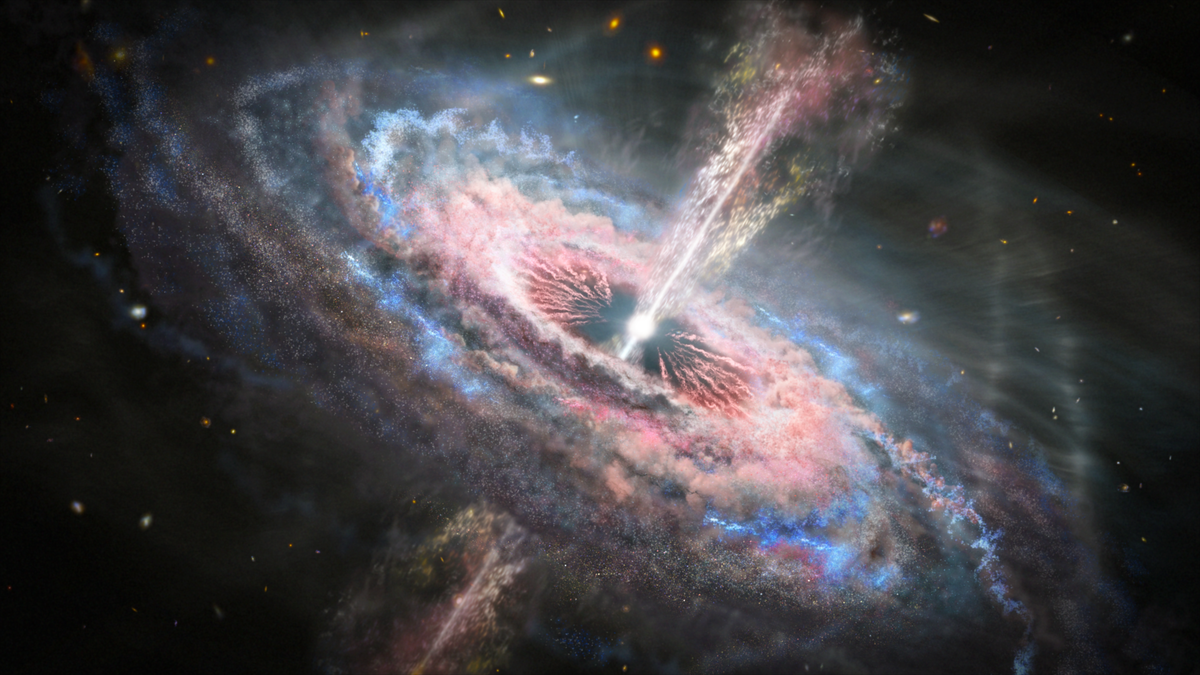 Nasa’s James Webb Space Telescope will use the brightest supermassive black holes in the known universe to try and unlock the secrets of how our galaxies and planets came to be.

The space agency is training the satellite on six of the most distant and luminous quasars –supermassive black holes with billions of times more mass than the Sun – to find out how galaxies first evolved in the early universe after the Big Bang, and how they were interconnected in those first few moments.

Quasars are located at the centre of galaxies, sucking up matter and unleashing huge amounts of heat and light radiation. When this energy is unleashed, it pushes the surrounding gas outwards and it tears across space like a tsunami, Nasa explains. The space agency will examine the gas in the space between galaxies, looking back in time when the first atoms were ionised (charged), over 12 billion years ago.

“All these quasars we are studying existed very early, when the universe was less than 800 million years old, or less than six percent of its current age. So these observations give us the opportunity to study galaxy evolution and supermassive black hole formation and evolution at these very early times,” explained Santiago Arribas, a research professor at the Department of Astrophysics of the Centre for Astrobiology in Madrid.

Light from the early universe is stretched by the expansion of space in a process known as redshift and the space telescope, which will replace the Hubble Space Telescope this year, is specifically designed to capture that light.

“We’re interested in observing the most luminous quasars because the very high amount of energy that they’re generating down at their cores should lead to the largest impact on the host galaxy by the mechanisms such as quasar outflow and heating,” said Chris Willott, a research scientist at the Herzberg Astronomy and Astrophysics Research Centre, and the Canadian Space Agency’s Webb project scientist. “We want to observe these quasars at the moment when they’re having the largest impact on their host galaxies.”

This energy, and the expulsion of gas, can have a huge impact on how galaxies are formed. When the gas is removed, the star formation rate decreases – occasionally so much that it can completely halt star formation completely. It is believed that these ‘outflows’ are the main mechanism by which gas and other material is redistributed throughout a galaxy, or spread between galaxies.

In the early stages of the universe, neutral gas between the galaxies meant the universe could not be seen through using ultraviolet light, but over hundreds of millions of years this gas eventually became ionised and transparent.

This is known to scientists as the Era of Reionisation, when neutral hydrogen atoms were charged by increasing radiation from the first massive stars. This moment was vital to the formation of the universe, and tracking reionisation is one of the few means by which scientists can study these past stars.

The emergence of these first stars marks the end of the “Dark Ages” of cosmic history, when there was an absence of discrete sources of light, but it remains a mystery to scientists why that happened in the first place.

When scientists look at quasars, they will be able use the light emitted from them to study these gases, which absorb the light at a specific wavelength. The brighter the quasar is, the more visible the effects of this absorption are, and the more information scientists will gather about the formation of our universe.

“If you want to study the universe, you need very bright background sources. A quasar is the perfect object in the distant universe, because it’s luminous enough that we can see it very well,” said Camilla Pacifici, an instrument scientist at the Space Telescope Science Institute. “We want to study the early universe because the universe evolves, and we want to know how it got started.”