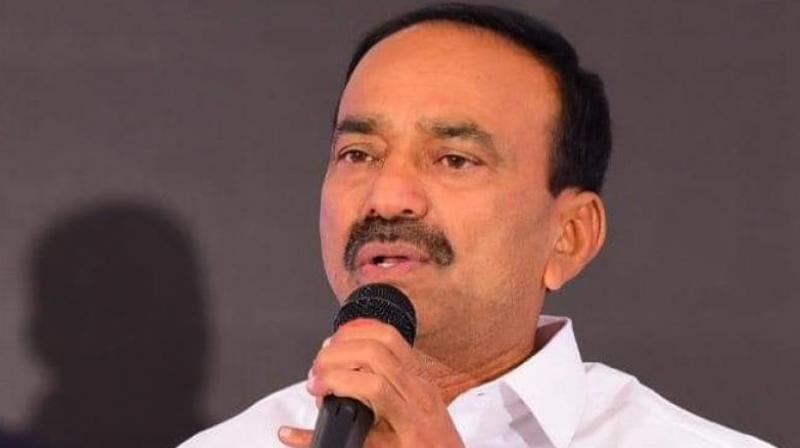 Karimnagar: “When an elephant walks, dogs bark at it. But the elephant doesn’t care. Similarly, the ruling TRS is prompting many leaders to visit Huzurabad and talk against me. They can do nothing against me,” said former minister and BJP leader Etala Rajendar at a BJP meeting in Kamalapur mandal of Huzurabad constituency on Tuesday.

Rajendar said his political career started from Kamalapur and he owned hundreds of acres of land before entering politics. “When I am thinking about the welfare of the people, the ruling party leaders are trying to devise a plot against me and playing cheap politics,” he said.

“They targeted my minister post and challenged me to resign, but what are they doing? By allowing the MLAs from other parties to join the TRS, they killed democracy. I submitted my resignation. I have a lot of confidence and faith in the people of Huzurabad,” he said.

He said the entire Telangana is now looking at Huzurabad. “KCR is preparing to corner me from all sides. It is the time to teach him a fitting lesson and reduce his pride, his money and power, he said at the meeting.

During all these seven years, did any MLA or other leader of the TRS party bother about the problems of the people here? Now all the leaders are coming to Huzurabad. About the TRS party in-charge of Kamalapur mandal and Parkal MLA,Challa Dharma Reddy, Rajendar said he was aware how he made money. “He turned his school into a bar. He will be taught a fitting lesson in the coming days if he does not stop engaging in cheap politics,” warned Rajendar.

Referring to Wardhannapet MLA Aroori Ramesh, Rajendar said he was roaming around Jammikunta and trying to “purchase” leaders for the TRS. “They can buy leaders, not the people. Even KCR will not be able to purchase the people. The people of Huzurabad are fully aware of such moves. They do not care even about their lives when a question arises of their self-respect, he said.

“The TRS is purchasing leaders of its own party. Entire nation is feeling ashamed of this. The TRS party only knows that whenever there are elections, they have to spend crores of rupees. They are also planning to spend Rs100 crore in Huzurabad to win the bypoll in an undemocratic manner,” he alleged.

Rajendar said officials of various departments, especially police, are facing a lot of problems as pressure is exerted by the ruling TRS party on them. They should not feel disappointed. The BJP is at their side and will teach the TRS and its leaders a befitting lesson in the coming days, he said.

He said that right from birth, the people of Telangana have started fighting against injustice. “When they started to speak, they started singing songs against those who tried to suppress them. They never led the life of slaves. The same blood is flowing in my body. It is my warning to all MLAs and ministers who are visiting Huzurabad to try and seek votes from the people in a democratic manner; that, if you try playing cheap politics, then all the people who support democracy will teach you all a fitting lesson,” he warned.

The former minister said the people are unable to understand why the state DGP and the chief secretary are working like slaves. They must work as per law and not by taking patently wrong orders from TRS leaders. “Be careful, do not try harass my followers and BJP activists. Those who try to harass BJP men will not be spared. I am Etala Rajendar, my party is the BJP and my flag is the saffron flag, they must remember this,” he sid in Kamalapur.