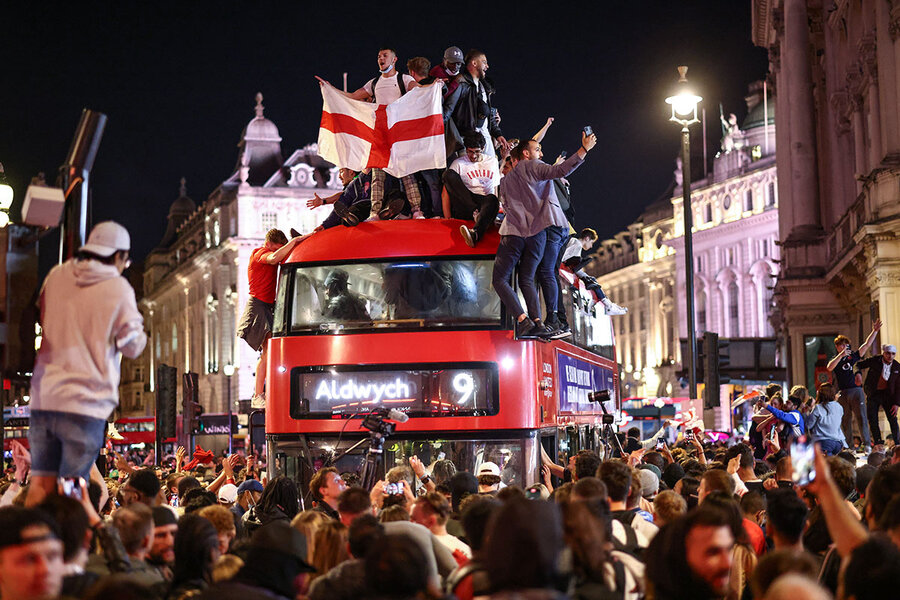 Some things don’t change, and sometimes they change without warning. English weather is inconsistently erratic. Sunshine only reveals itself in glimpses. Take it when you can.

The same could be said about joy. This spontaneous emotion, most keenly experienced only in the present moment, was seemingly lost in the past eighteen months of lockdowns, social isolation, and COVID-19 cases. Joy hibernated under the snow.

It has now arrived when the nation needed it most. Euphoria has swept Shakespeare’s sceptre’d isle, thanks to the English men’s soccer team reaching its first major final in 55 years.

After more than a half-century, England is in a major soccer championship final, and the country is overjoyed. But for Britons like correspondent Shafi Musaddique, it’s not just about the football.

At Wembley Stadium, a 30-minute journey from my north London home, Danes and Englishmen and women enthusiastically mingled, chatted, and bonded before Wednesday’s semi-final in front of 60,000 spectators. Denmark, charged with emotion since star player Christian Eriksen nearly died from an on-field cardiac arrest in their opening game of the European Championships, felt it was their time.

But no one, not even the plucky Danes, could take England’s moment of joy, as the home team won 2-1 in extra time. After a year and a half of some of the toughest restrictions on daily life since World War II, delirium – joy in excess – filled British living rooms and fan zones. Cars honked their horns, strangers embraced, and people waved from their balconies.

The chant ‘‘It’s coming home” – a reference to England as the birthplace of football, and a helpful hint as to where championship trophies belong – rings at every opportunity, on every street corner. It’s a song originally created more in irony than certainty, a mocking satire of England’s desperation and longing hope, but to some degree it has achieved its prophecy already.

A flicker of hope came and went in the 1990s with England hosting and almost winning the 1996 European Championships (though the twin nemeses, penalty shootouts and Germany, stopped the “Three Lions” in their tracks). Hope turned to despair in the 2000s, mostly due to the failure of a national team crushed by tabloid culture’s toxic expectations and a team of individual stars, some transcending the game itself such as David Beckham, but never a collective.

Joy is an incredibly important feeling at this point of the pandemic. Italy and England – two countries which have suffered more than many from COVID-19 – will face off in a final riddled with poignancy for Europeans. But the joy is riddled too with some guilt, rooted in a year and a half of shared pain, public and private, national and regional.

There is much anger and polarization in both British politics and society. Sadness and tension have eaten at this island; not just from the devastation of COVID-19, but from the identity-wrenching battles of Brexit and competing national visions. Centuries-old notions of class remain, as do questions about race and racial prejudice.

England’s magical soccer ride will not complete social progress nor will it permanently heal divisions. But this moment of euphoria, led by a squad who all (bar three players) claim a foreign-born parent or grandparent, has unified the nation at a time when it was sorely needed. It is a rare milestone in the generational markers of life, bringing overwhelming pride to the St. George’s flag rarely seen in public life; so long used as a symbol by the far-right, now embraced by all – myself, a child of immigrants, included.

In 1998, commentators predicted that a World Cup win for the multicultural French national team would accelerate social change. It never did. And it may not do so in England either.

But unlike that 1998 French zenith, England’s soccer players – much like their U.S. women’s team counterparts – publicly avow and fight for social causes, from fighting child poverty to ending racial discrimination. There is a growing public sense that those responsible for English joy also appear to be top quality role models.

And that includes the English team’s manager, Gareth Southgate. An eloquent, unassuming man, he wrote an open letter before the tournament backing his team taking the knee in support of Black Lives Matter even as a vocal portion of English fans booed the players doing so. And he has won over hard-line skeptics with his calm, composed manner. Britons would quite like their politicians to take heed.

Mr. Southgate and this team have allowed those with myriad identities to share the moment. I recently buried the man who started off the whole chain of migration for my family some 60 years ago, in a socially distanced funeral on the outskirts of London. My uncle’s legacy, and that of all the pioneers like him, lives inside those of us born British; our accents, our education, our opportunities, and our multiple identities. We are the lions and we’re home.

There’s so much to identify with and be proud of in the current England team. And we’re a part of it.