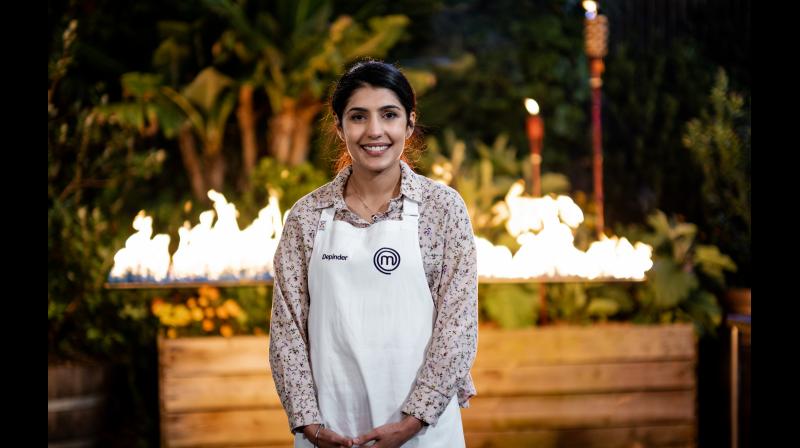 She left all her fans teary-eyed when she got recently eliminated after making it to the top 10 at the MasterChef Australia Season 13. Depinder Chibber was equally loved by the judges—Andy Allen, Melissa Leong, and Jock Zonfrillo—as well as her fellow contestants. She was a master at rolling out winning dishes like ‘prawn moilee with fragrant coriander rice and a peanut salsa’, ‘fish Amritsari with green chutney’, ‘green curry cake with white chocolate chilli ganache, ‘coconut ice cream and a coconut crumb’, and ‘Tandoori chicken with naan, chutney and charred cabbage.

Into her Indian bento box went chhole sabzi, gobhi paratha, kadhai paneer with a pickle, which she says she made by taking inspiration from her grandmother’s recipe, and the added magic of a smoked lassi.

Speaking to us, Depinder calls her MasterChef journey a rather positive roller coaster ride with a good momentum. “MasterChef Australia is a benchmark for home cooks in Australia,” says Depinder, adding that when she started, food was just a hobby. “But the competition changed everything for me.”

Born in New Delhi, Depinder later moved to Australia when she was 11 years, a change that she remembers as not an easy one. “It was a big change when my family and I moved to Australia from New Delhi. I was young and didn’t have the option of playing with the neighbourhood kids or my cousins, as I did in India,” she recollects. Eventually, though, the family got used to the lifestyle. “Food has been a bridge for me always and it did help me to adapt to live in both the countries,” says Depinder.

Deeply connected to India, she used to visit India at least once every year to meet her grandparents and enjoy the food here, her last visit being at the end of 2019, just before COVID-19 hit. “My dream is to live in India with my husband for a couple of years as he has never been in India and enjoy Indian food. Food is important and a big part of my life,” she reiterates.

Growing up in India was all about food for Depinder. “I was fortunate to grow up in a family that loved food. As I grew up, I developed my own interests in food and started experimenting with flavours and different techniques. I discovered a passion for baking and making desserts as a form of my creative outlet, which was almost therapeutic,” she states.

As for what inspired her to jump into the world of gastronomy, the 29-year-old who’s a pharmacist by profession says she’d wanted to go onto MasterChef for a long time. “I actually filled out my application form a few times and finally mustered up the courage to send it off last year,” she says, adding that looking at the COVID situation around the world, it was now or never for her.

Getting Indian food on the platter

During MasterChef Australia Season 13, Depinder got into her first pressure test when she was in the Top 12 although interestingly she wishes she’d gone into it much earlier. “If I was in a pressure test earlier, then it would have helped me to be better prepared,” she says matter-of-factly.

While her cooking style is undoubtedly Indian, Depinder loves doing French patisserie too. And though Depinder got to cook many regional Indian dishes during her stint in the reality show, her only regret was that she couldn’t get to make ‘Laal Maas’ for the judges.

“It was very welcoming to see the judges open to Indian home-style cooking. It did help to open a lot of doors. I have learned so much from the three judges; they bring different vibes on the show. I am lucky to know them and learn from them, and I think they’re great mentors who are always ready to help,” she states.

However, of all the chefs who visited the kitchen, there were a few who actually struck in Depinder’s mind. “I was blown away by former contestants Reynold Poernomo and Poh Ling Yeow. Even Emelia Jackson was very inspiring, and I love the way she works with pastry. But my favourite celebrity chef would be British pastry chef Darren Purchese though I was not cooking that day. The entire experience of him being in the kitchen was amazing,” she adds excitedly.

A passion for food

Depinder’s ultimate aim is to open up the Indian cuisine to all. “I am working on a cookbook, showcasing Indian cuisine and my style of cooking. Also, I am working towards creating easy food recipe videos on social media for food enthusiasts and for those who have showered me with so much love,” says the chef.

The MasterChef contestant says she’d also love to open a restaurant—nothing very fancy though, she remarks quickly. “Something that serves authentic Indian food from different regions,” she adds. “I want to show Australians that Indian food is way beyond what we see in restaurants here, with a few limited recipes.”

But apart from nurturing her dreams, Depinder is currently working with Andy at his restaurant, ‘Three Blue Ducks’. “It’s such a different style of working in the professional kitchen and yet so rustic—I love that style of food. I am learning how to run a pass, speed up the work during business hours, even cooking with wooden fire,” she adds.

The young chef stoutly believes that those who want to pursue their life in the food industry have to be following their passion. “It doesn’t need to be a full-time cooking opportunity but a side work or even a hobby. And if not working at a restaurant too, they can showcase their work on social media as well. The options are endless now when working in the food industry. One just needs to follow their heart and passion,” she concludes.