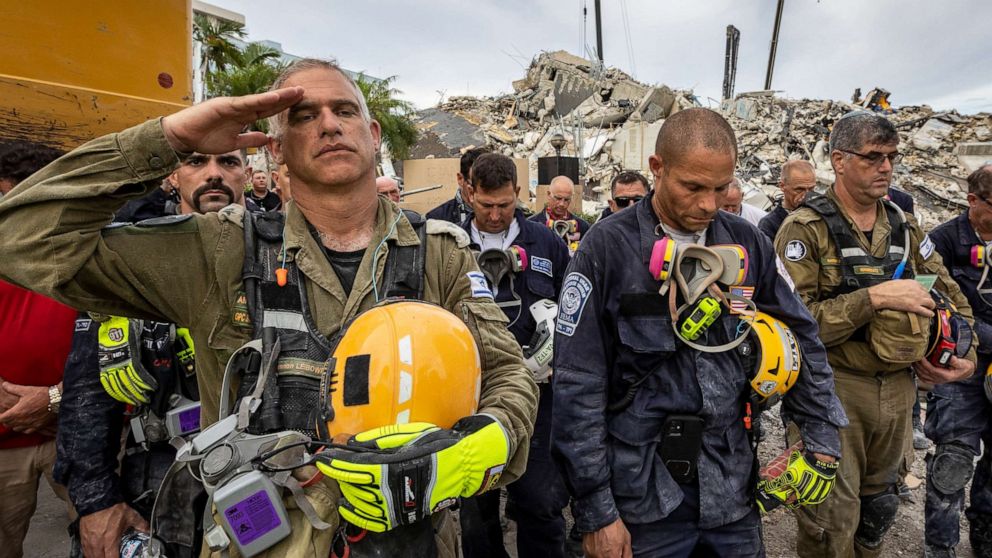 The search and rescue efforts at the collapsed Surfside, Florida, apartment complex have shifted to a recovery effort as 86 people remain unaccounted for, officials said Wednesday.

“It is with profound sadness that this afternoon I’m able to share that we made the extremely difficult decision to transition from operation search and rescue to recovery,” Miami-Dade County Mayor Daniella Levine Cava said at a press briefing Wednesday evening, on the 14th day of the search.

The emergency crews had “truly exhausted every option available to us in the search and rescue mission,” the mayor said, and noted that the families of those still missing had been informed of the decision to transition to a recovery effort and “help to bring closure.”

Several engineering and medical factors went into the decision, including the “pancake” nature of the collapse, “which gives you the lowest probability of survivability,” Miami-Dade Fire Rescue Assistant Chief Raide Jadallah said during the briefing.

The fact that rescuers were finding human remains in the rubble was another factor, he said.

The disaster occurred on June 24 around 1:15 a.m. local time at the Champlain Towers South condominium in the small, beachside town of Surfside, about 6 miles north of Miami Beach. Approximately 55 of the oceanfront complex’s 136 units were destroyed, according to officials. Since then, hundreds of first responders have been carefully combing through the pancaked piles of debris in hopes of finding survivors.

A moment of silence was held Wednesday evening in honor of all the victims of the collapse. Religious leaders, including chaplains and rabbis, led first responders, local officials and others gathered in prayer next to the rubble.

On Wednesday, a grand jury agreed to investigate the Surfside collapse, Miami-Dade State Attorney Katherine Fernandez Rundle announced, saying in a statement that she requested that the grand jury “look into how we can prevent such a disaster from occurring again, not just in Surfside, and not just in condominiums, but in all buildings and structures in the coastal, intercoastal and surrounding areas of our county, state and nation.”

No further details were available, as grand jury work is confidential in Florida.

The announcement came after three more victims — husband-and-wife Gino Cattarossi, 89, and Graciela Cattarossi, 86, as well as Simon Segal, 80 — were identified Wednesday, according to investigators. In total 33 victims have been identified as of Wednesday evening.

Crews have hauled away more than 7 million pounds of concrete and debris from the vast scene, but large piles of rubble still remain. Miami-Dade Fire Rescue Chief Alan Cominsky said the rescue workers have been “aggressively” searching for any voids or “liveable spaces” within the debris where there could be trapped survivors but that they are “not coming across that.” No survivors have been discovered in the wreckage of the building since the morning it partially collapsed.

It could take several weeks to get to the bottom of the rubble, Cominsky said Wednesday.

Teams have been able to search in areas that were previously inaccessible following the demolition of the remaining part of the building.

The part of the building that remained standing was cleared of any people or pets before it was demolished on Sunday night, due to concerns about its structural integrity. However, it was too dangerous for surviving residents to enter the building to retrieve their belongings, officials said.

The storm, which weakened from a hurricane, initiated the discussion about demolishing the rest of the building and fast-tracked the process, according to Surfside Mayor Charles Burkett. Elsa made landfall along Florida’s Gulf Coast Wednesday morning. The storm has caused at least one death and miles of destruction, according to officials.

Prior to the demolition, the search and rescue operation was halted for almost an entire day last week due to safety concerns for the crews regarding the remaining structure. Poor weather conditions have also forced them to temporarily pause working.

The cause of the partial collapse to a building that has withstood decades of hurricanes remains unknown and is under investigation. Built in the 1980s, the Champlain Towers South was up for its 40-year recertification and had been undergoing roof work — with more renovations planned — when it partially collapsed, according to officials.

“The whole world wants to know what happened here,” Levine Cava told reporters on Tuesday morning. “I look forward to learning the truth, as do we all, but I think it’ll be a while before it is understood.”

Burkett told reporters that he has drafted a letter that will be sent to condo boards and building owners outlining “minimum stopgap” measures to ensure their properties are secure.

“The town of Surfside is committed to doing everything it can to ensure the safety and peace of mind of its residents and we are grateful to our county, state and federal partners for all their amazing support,” he said.