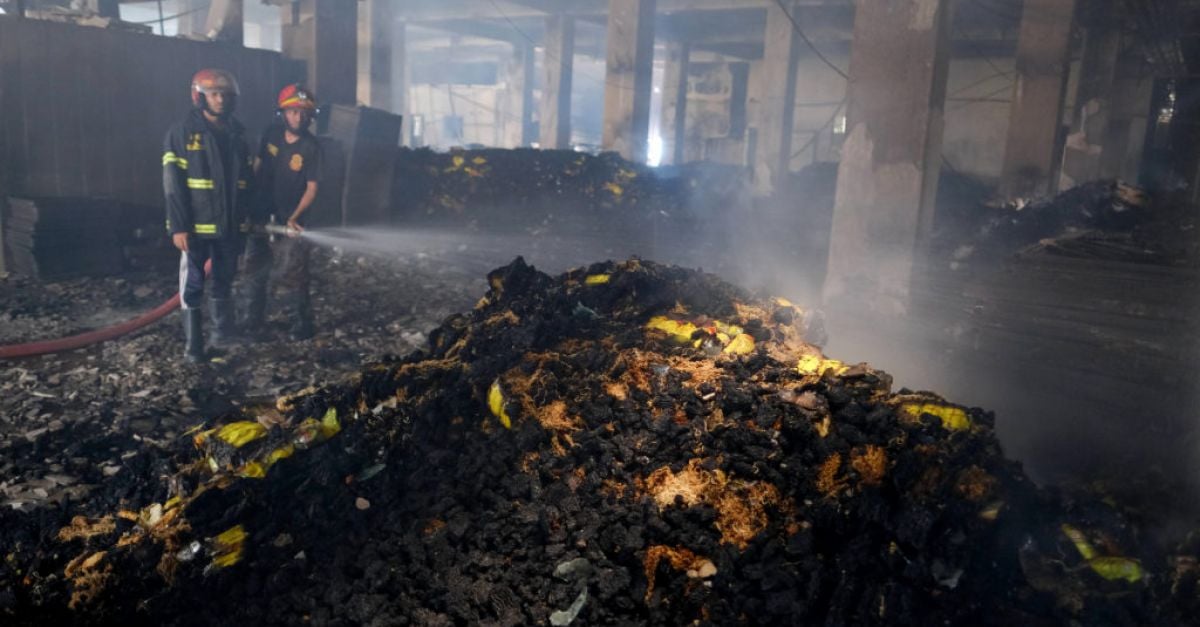 A fire engulfed a food and beverage factory outside Bangladesh’s capital, killing at least 52 people, many of whom were trapped inside by an illegally locked door, fire officials said.

The blaze began on Thursday night at the five-story Hashem Foods Ltd factory, in Rupganj, just outside Dhaka, sending huge clouds of black smoke billowing into the sky.

Police initially gave a toll of three dead, but then discovered piles of bodies on Friday afternoon after the fire was extinguished.

So far 52 bodies have been recovered, but the top two floors of the factory have yet to be searched, said Debasish Bardhan, deputy director of the fire service and civil defence.

He said the main exit of the factory was locked from the inside and many of those who died were trapped.

Many workers jumped from the upper floors of the factory, and at least 26 suffered injuries, the United News of Bangladesh agency reported.

Information about how many people were in the factory and how many were missing was not immediately available.

“For now, we only have these details.

“After searching the top floors we will be able to get a complete picture,” Mr Bardhan said.

Bangladesh has a tragic history of industrial disasters, including factories catching fire with the workers locked inside.

Continuing corruption and lax enforcement have resulted in many deaths over the years, and big international brands, which employ tens of thousands of low-paid workers in Bangladesh, have come under heavy pressure to improve factory conditions after fires and other disasters killed thousands of people.

According to the group’s website, the company exports its products to a number of countries including Australia, the United States, Malaysia, Singapore, India, Bhutan, Nepal and nations in the Middle East and Africa.

Mr Rahman said the company is fully compliant with international standards, but he was not certain whether the exit of the factory was locked.

According to Bangladesh’s factory laws, a factory cannot lock its exit when workers are inside during production hours.

“We are a reputed company; we maintain rules,” he said.

“What happened today is very sad.

As the recovery effort was carried out Friday, victims in white body bags were piled in a fleet of ambulances as relatives wailed.

As the heavy smoke continued to rise from the still smouldering factory, weeping family members of missing workers waited anxiously for news of loved ones outside the charred site.

Earlier, family members clashed with police as they waited overnight without any word of the fate of their loved ones.

The government ordered an investigation into the cause of the fire.

Past industrial tragedies have often been attributed to safety lapses that still plague the South Asian country despite its rapid economic growth.

In 2012, about 117 workers died when they were trapped behind locked exits in a garment factory in Dhaka.

Authorities imposed tougher safety rules after that disaster and the country’s garment industry has since become largely compliant under domestic and global watchdogs.

But many other local industries fail to maintain safety compliance and the disasters have continued.

In February 2019, a blaze ripped through a 400-year-old area cramped with apartments, shops and warehouses in the oldest part of Dhaka and killed at least 67 people.

Another fire in Old Dhaka in a house illegally storing chemicals killed at least 123 people in 2010.

The International Labour Organisation said in a 2017 report that Bangladesh’s regulatory framework and inspections “had not been able to keep pace with the development of the industry”.