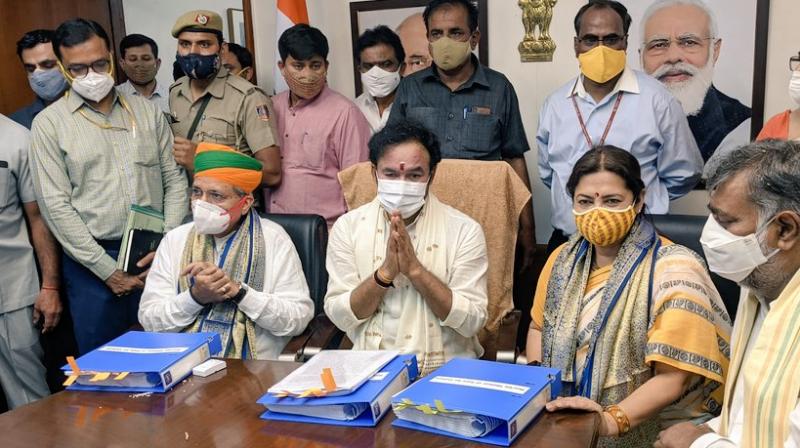 New Delhi: New Delhi: Union minister G. Kishan Reddy, elevated to Cabinet rank, took charge of the departments that are newly assigned to him from this week including tourism, culture and north rast region development, at the respective offices here on Thursday.

He took charge as tourism minister and minister for development of north-eastern region (DoNER) after taking charge as culture minister at Shastri Bhavan. Also present were Shripad Yesso Naik and Ajay Bhatt, who will be the ministers of state in the tourism department.

Speaking to the media, Reddy said he will work for achieving the vision of Prime Minister Narendra Modi with full commitment. “The kind of transformation that the North-Eastern Region experienced in the last seven years in all spheres of life is both incredible and unprecedented,” he said.

He said that, under the guidance of Modi, he will try to complete all the pending projects in the region within the stipulated time-frame. He thanked the former DoNER minister Dr Jitendra Singh, who too was present, for his stellar role he played in the overall development of the North Eastern Region.
Union minister of state for DoNER B.L. Verma said the whole country is aware of the kind of development that took place in the North Eastern Region under Prime Minister Modi, particularly in the area of connectivity.

Under the guidance of Reddy, and with the help of senior officials, the Ministry of DoNER will scale new heights.

He said that he will make all efforts to deliver on the responsibilities placed on him by the PM.

Earlier, Secretary to DoNER, Dr Inder Jit Singh, and officials welcomed the ministers and made a brief presentation.