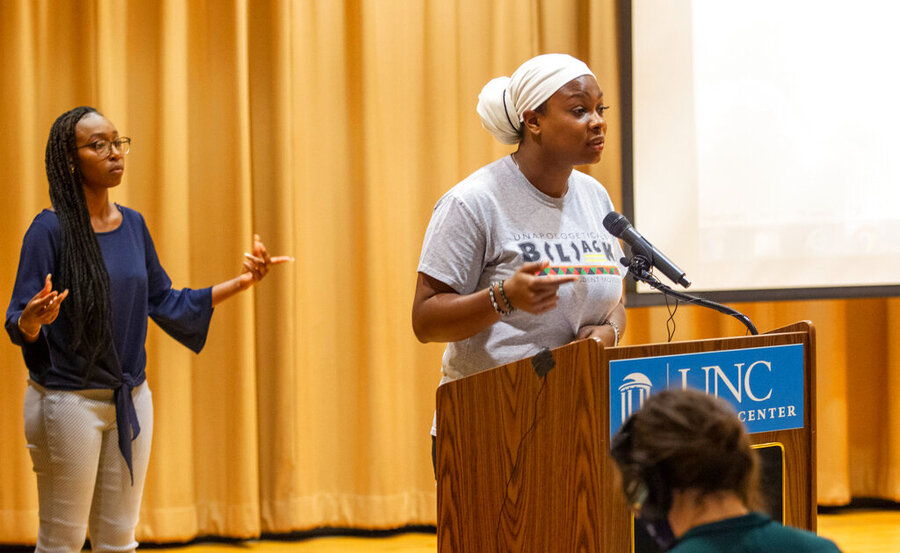 When the University of North Carolina (UNC) first declined to vote on granting tenure to journalist Nikole Hannah-Jones, kicking off a protracted battle marked by allegations of racism and conservative backlash over her work examining the legacy of slavery, Black students and faculty at UNC saw yet another example of the institution’s failure to welcome and support scholars and students of color.

For years, Black students and faculty at UNC have expressed frustration with the way they are treated, from disproportionate scrutiny by campus police to the dearth of Black professors and staff. Without meaningful self-examination and change, they said, UNC risks its ability to recruit and retain students and faculty of color and continues to alienate its Black community.

“Right now, the relationship between the University of North Carolina and its Black students, faculty, and staff is broken,” said Jaci Field, advocacy committee co-chair of the Carolina Black Caucus, a faculty group. “But have no fear. You belong. This is your home, too.”

UNC’s Black student and faculty groups presented a list of demands to the institution at a news conference Wednesday. Many centered on eliminating structural barriers Black students face, such as formalizing access to resources that many only learn about through word of mouth. The groups also urged the university to hire Black counselors and support staff in offices that work with students.

“It is hypocritical for this university to claim that Black lives matter, while disregarding the pain they have caused their own Black students and faculty,” said Julia Clark, vice president of the Black Student Movement.

Ms. Hannah-Jones said Tuesday that she will turn down a faculty position at UNC and instead join Howard University as a tenured professor. Last year, she submitted her tenure application to UNC after being recruited by the dean of the journalism school. But the submission was halted earlier this year by a trustee who vets the lifetime appointments because he had questions about her nonacademic background, university leaders have said. Major donor Walter Hussman Jr., for whom the journalism school is named, had also sent emails to university leaders raising questions about her Pulitzer-winning work on The 1619 Project.

That work examines the legacy of slavery in the United States and has drawn backlash from conservative critics. Ms. Hannah-Jones was initially offered a contract position, despite her predecessors receiving tenure with their appointments. After weeks of mounting pressure, including protests led by the Black Student Movement, the school’s trustees voted last week to offer her tenure.

In a statement Wednesday, Chancellor Kevin Guskiewicz said that he has reviewed the list of changes sought by the Black Student Movement and is asking the university’s leadership team to develop a plan to address those and other concerns.

“I am grateful for the continued advocacy of the Black Student Movement, the Carolina Black Caucus, and the Black Graduate and Professional Student Association. Their voices have been vital throughout the history of Carolina,” he said.

But Black faculty and students say promises without action will not be enough. The Carolina Black Caucus has previously said that a growing number of its members are thinking about leaving the university after recent events.

The delay in the vote on offering tenure to Ms. Hannah-Jones, along with the perception that the university allowed political interests to override the faculty vote that largely supported granting her tenure, has resonated far beyond Chapel Hill.

William “Brit” Kirwan, chancellor emeritus of the University System of Maryland and a consultant for the Association of Governing Boards of Universities and Colleges, said the perception that Ms. Hannah-Jones’ tenure vote was delayed by outside political forces touched the “third-rail of serious academic institutions.”

The events will likely impede UNC’s ability to recruit and retain top researchers, who may conclude that academic freedom at the school – especially to research topics like systemic racism – could be jeopardized by outside influence, said Irene Mulvey, president of the American Association of University Professors.

“I think it’s going to be a very long and difficult process to recover, if they can even recover from this. This is a black eye on the University of North Carolina Chapel Hill,” she said. “And it’s not only on campus; it’s nationwide. Certainly all of academia has watched this unfold with horror.”

Institutes of higher education have long struggled to retain faculty of color, who often face systemic barriers in academia. Ms. Mulvey said faculty of color often face greater demands on their time, such as constantly being asked to serve on diversity and inclusion committees, and risk being viewed as “uncooperative” relative to white peers if they decline.

Asked on Tuesday whether she felt her decision to reject the tenure offer would hurt UNC’s ability to recruit and retain Black students and faculty, Ms. Hannah-Jones said the fault would lie with the board of trustees, if that were the case.

“I didn’t create this situation,” she said. “So if they’re that concerned, they’ll do something different.”

She added: “The issues on that campus, we know, go back further than my decision. I’m not to blame for that.”