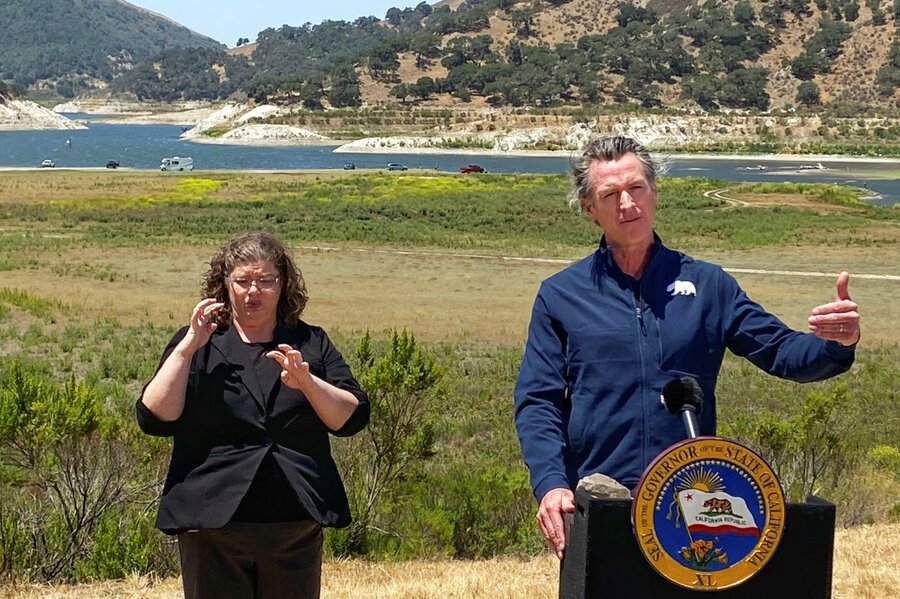 California Gov. Gavin Newsom on Thursday asked people and businesses in the nation’s most populous state to voluntarily cut how much water they use by 15% as the Western United States weathers a drought that is rapidly emptying reservoirs relied on for agriculture, drinking water, and fish habitat.

The water conservation is not mandatory, but it demonstrates the growing challenges of a drought that will only worsen throughout the summer and fall and is tied to more intense wildfires and heat waves. Temperatures in parts of the region are spiking again this week as firefighters battle several wildfires in Northern California and other states but are less extreme than the record heat wave that may have caused hundreds of deaths in the Pacific Northwest and British Columbia in late June.

California’s most important reservoirs are already at dangerously low levels and will likely reach historic lows later this year. Lake Oroville in Northern California is at 30% capacity, and state officials worry water levels could get so low they might have to shut down a hydroelectric plant later this year. Along the Russian River, officials fear Lake Mendocino could empty later this year.

“This is jaw-dropping, what’s happening in the West Coast of the United States,” Mr. Newsom said Thursday during a news conference at Lopez Lake, a reservoir in San Luis Obispo County formed by a dam on the Arroyo Grande Creek that is at 34% capacity.

A historic drought tied to climate change is gripping the U.S. West and comes just a few years after California declared its last dry spell over in 2016. The earlier drought in California depleted groundwater supplies and changed how people use water, with many people and businesses ripping out landscaping and replacing it with more drought-tolerant plants.

Compared to before the previous drought, urban water usage in California is down an average of 16%. But scientists say this drought is already hotter and drier than the earlier one, accelerating the impact on people and the environment.

California’s Mediterranean climate means it doesn’t get significant rain or snow until the winter. The state relies on snowmelt in the mountains to fill its reservoirs in the spring, which then provide water for farms, homes, and fish throughout the year.

Some big storms in January made officials optimistic about avoiding water shortages this year. But the soil was so dry that instead of melting into runoff to fill rivers and reservoirs, much of the snow in the mountains instead seeped into the ground.

“What we didn’t understand was we had this deepening and intensifying drought underground,” said Karla Nemeth, director of the California Department of Water Resources. “It really is the speed at which the compounding effects of climate change in soil moisture and ambient temperatures have made this drought a very different kind of drought. It’s no longer a slow-moving train wreck.”

Given how low California’s reservoirs already are, Ms. Nemeth said Mr. Newsom’s request for people to use less water is about planning for next year. The Democratic governor is asking for voluntary conservation efforts, such as taking shorter showers, running dishwashers only when they are full, and reducing the frequency of watering lawns.

Barbara Barrigan-Parrilla, executive director of Restore the Delta, called Mr. Newsom’s response “too little, too late.” She said her group and others warned the state at the end of 2020 to prepare for the drought. She said Mr. Newsom has been given “bad advice” by state officials.

“They let too much of the water out of the system for industrial agriculture users,” she said. “Our water resources and public trust resources like salmon fisheries have been squandered for almonds and other unsustainable crops.”

Farmers, meanwhile, have complained about their water allocations being severely cut this year. Ms. Nemeth said the state released water from Lake Oroville largely to satisfy water quality requirements in the Sacramento-San Joaquin Delta, formed by those two river systems that feed into the San Francisco Bay.

“We released more than we had planned because much of that water never made it to the delta – it was diverted by other water users instead,” she said.

In Nevada, a new law bans nearly a third of grass in the Las Vegas area, targeting ornamental turf at places like office parks and street medians. The ban does not apply to single-family homes, parks, and golf courses.

In California, Mr. Newsom also added nine more counties to an emergency drought proclamation, which now covers 50 of the state’s 58 counties and 42% of the state’s population.

Large cities, including Los Angeles, San Diego, and San Francisco, are not included in the proclamation. But Mr. Newsom is still asking people who live in heavily populated areas to reduce their water consumption because they rely on rivers and reservoirs in drought-stricken areas for much of their supply.

Counties included in the proclamation are eligible for various state actions, including suspension of some environmental regulations.