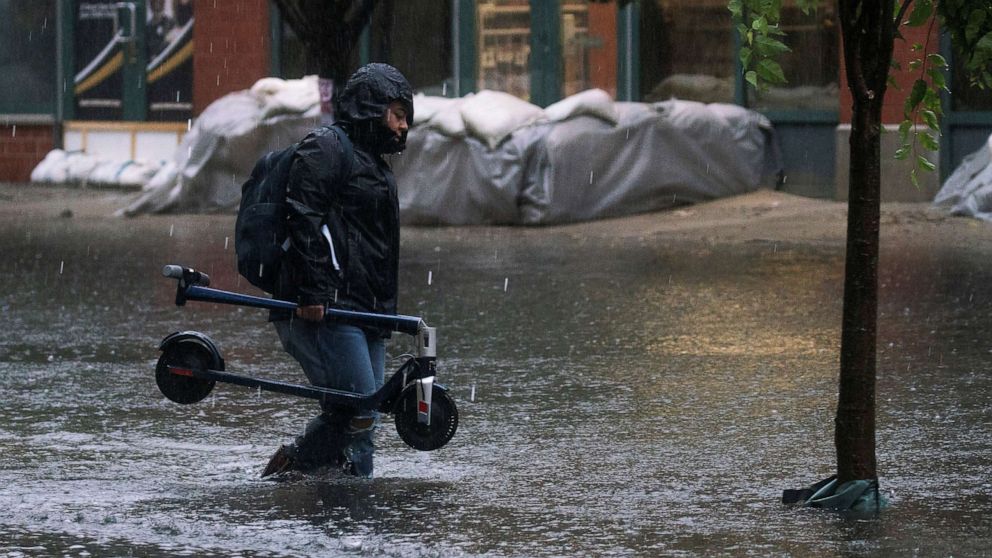 After making landfall in Florida and pummeling the southeastern United States, Elsa is moving north with the eye of the storm sweeping over the coastlines of Delaware, New Jersey and New York on Friday morning before reaching Massachusetts and Maine this afternoon, according to the latest forecast from the National Weather Service.

As of 5 p.m. ET, Elsa was moving to the northeast at 35 mph with its center located 65 miles southeast of Portland, Maine. The deadly storm was packing maximum sustained winds of 50 miles per hour, with even higher gusts.

The National Weather Service said it doesn’t anticipate a significant change in Elsa’s strength through Friday. The storm has weakened from the first hurricane of the 2021 Atlantic season. Elsa is expected to move offshore from the northeastern U.S. coast by Friday evening before heading to Canada’s Atlantic provinces by late Friday night and Saturday. The storm is then forecast to gradually weaken over the weekend.

Flash flood watches are still in effect for Maine on Friday evening after flooding in Philadelphia, New York City and Boston during the day.

Much of the Northeast is forecast to receive 2 to 4 inches of rain through Friday, with up to 6 inches possible in parts of New York, Connecticut and Massachusetts. That could trigger “considerable flash and urban flooding,” the National Weather Service warned.

New York City’s Metropolitan Transportation Authority said there were system-wide delays for buses due to Elsa and that the storm could impact service along some subway and rail lines. Also, empty tractor-trailers and tandem trucks were banned on the seven bridges and two tunnels that the MTA manages until at least noon on Friday due to the weather.

At least four deaths have been attributed to Elsa since it formed in the Atlantic Ocean earlier this month.

After the storm battered several eastern Caribbean islands as a Category 1 hurricane, one fatality was reported in St. Lucia and two more in the Dominican Republic, according to The Associated Press. One death was confirmed in Jacksonville, Florida, by local authorities.