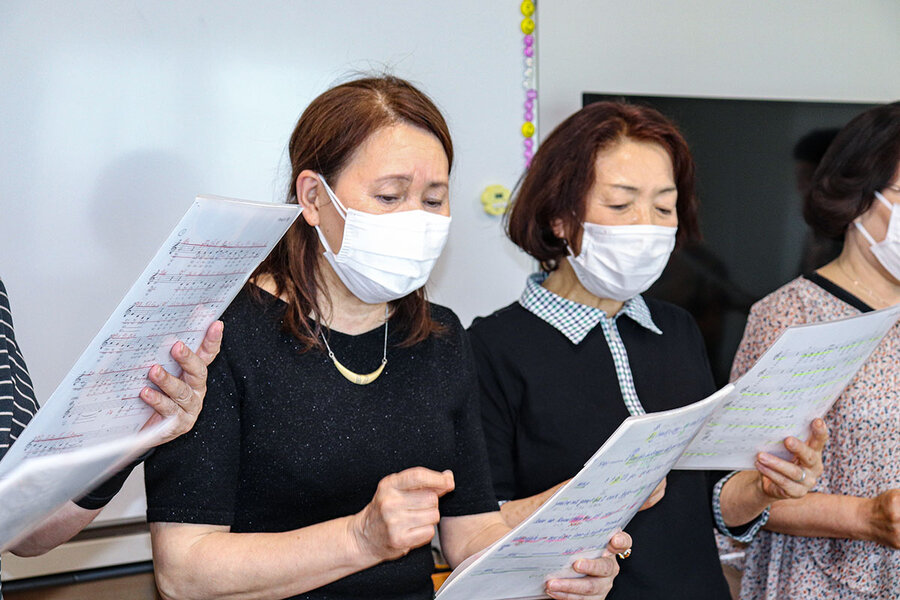 With the morning sunlight coming in from the window, a group of women wearing masks are singing in unison, lightly swaying to the cadence of the music. Within a few weeks, they hope, they’ll be singing these songs for several U.S. Olympians scheduled to visit after the games.

In a country where the Olympics are so unpopular, it might seem strange that they still elicit excitement here in Ofunato, a fishing town 280 miles north of Tokyo, known for oysters, scallops, and a deeply indented coastline.

Japan was jubilant when it won its bid to host the “Recovery and Reconstruction Games,” marking 10 years of healing and resilience since the Tohoku earthquake, tsunami, and nuclear disaster. But for many, excitement has given way to disappointment and disillusionment amid concerns over the pandemic. A June survey by Asahi newspaper found 62% want the event postponed once again or canceled.

With the Olympics sealed off to the public, many question their value. But not in Japan’s host towns, some still recovering from the 2011 earthquake and tsunami, as they wait to hear if athletes will arrive on their doorstep.

In host towns like Ofunato, though, which have been preparing for years to meet foreign athletes, support for the Games runs unusually deep. And here in particular, “Recovery and Reconstruction” is much more than an Olympic slogan. Four hundred and nineteen people died in Ofunato on 3/11, as the triple disaster is called. But volunteers came from many countries, including the United States, to help survivors, and the Olympics gives the town a chance to voice its gratitude.

Konno Eiko, a choir member, says the group wants to dedicate songs to the three U.S. track and field athletes due to visit because “Americans helped us out” in the aftermath of the disaster, which killed about 18,400 people across the northeast.

Along with other emergency workers from home and abroad, 148 people from Virginia and California assisted in search and rescue operations in March 2011, after walls of water flattened the central part of the city. Members of All Hands Volunteers, a nonprofit organization headquartered in Mattapoisett, Massachusetts (now All Hands and Hearts), spent seven months on the ground to help rebuild.

Before her two-story house was swept away by the tsunami, Ms. Konno managed to evacuate her house and rush to the higher ground.

“We lost everything,” she says. “But the experience gave me new perspectives on life.”

Ms. Konno, who offers piano and English lessons at her home, and her husband finally moved into a new house in 2015, away from the city center. Today, Ofunato is dotted with blue signs that indicate the tidal levels at the time of the tsunami, but otherwise bears few scars of the disaster. Vehicles come and go on newly rehabilitated roads lined by a shopping mall, commercial facilities, and the sparkling white fish market.

“The Olympics represent an opportunity to show this region’s recovery and resilience and express our appreciation to the U.S.,” Ms. Konno says, adding that it’s a chance to boost ties.

Matsuo Hiroshi, who works at Ofunato Taxi, says the company’s new office near the port was completed just two years ago, after the previous building was toppled by the tsunami.

“I certainly want more people to see the city’s recovery,” Mr. Matsuo says. But he is still concerned about an influx of visitors, as this area of Japan is one of the least affected by the pandemic.

Throughout Japan, many people share his concerns. As infections surge, Tokyo has announced a state of emergency, scrapping plans to allow some local spectators. The International Olympic Committee and Japanese organizers have already decided to ban spectators from overseas. Medical experts have warned of the risk that the Games could become a super-spreader event, especially as Japan has vaccinated only about 15% of the population.

Surging costs have also soured public opinion, along with a series of homegrown controversies including the withdrawal of the original Olympic logo after plagiarism accusations, and Japanese Olympic Committee President Takeda Tsunekazu’s resignation amid bribery allegations.

Yet authorities are pressing ahead with the games partly, critics claim, for political reasons. With parliamentary elections coming up and a poor record on handling the pandemic, “there are no other factors that could boost [Prime Minister Suga Yoshihide’s] support ratings” says author and Olympics critic Honma Ryu.

Geopolitics also plays a part. Tokyo hosted the 1964 Games – also designed to showcase “recovery,” after the country’s defeat in World War II – which means it would be the first Asian city to hold Olympics twice. And Japanese conservatives want Tokyo to stage the first “post-pandemic” games ahead of Beijing 2022.

Nevertheless, many of the country’s 528 host towns have seen exchange events cancelled, after years of preparation. One of them is Kitakata, known for its ramen and sake, which hosted U.S. rowers in 2019 for an event with schoolchildren. The city decided to reach out to American athletes after receiving donations and words of encouragement from its sister city – Wilsonville, Oregon – after the triple meltdown at the nearby Fukushima power plant, according to city official Tomita Masanori. Plans to welcome Olympians this summer were scrapped in July, and replaced with an online exchange.

Kitakata “looks to the post-pandemic future,” Mr. Tomita says. The Olympics are “just the beginning” of its relationship with U.S. athletes.

In some locals’ eyes, the government’s emphasis on the “Recovery Games” is misplaced.

Konno Hidenori is one of the tens of thousands of Fukushima residents who have been unable to return to their homes near the ruined Fukushima Daiichi nuclear power station due to radioactive contamination. Since 2016, Mr. Konno has lived in Otama Village, another host town in Fukushima prefecture, which hopes Peruvian Olympians will visit after the games.

Holding the Olympics right now, he says, is beyond his comprehension.

“The government should put more effort into the recovery of the disaster-affected areas, not into the Olympics,” he says. “They have never showed us any plan on when or how we will return home.”

Critics argue the government should provide much-needed help to those who have struggled to make ends meet due to 3/11 or the pandemic, rather than spend money on the games – estimated to cost 3 trillion yen ($27 billion).

Mr. Honma foresees what for him would be a silver lining to all the controversy and angst. “No more Olympics will be held in Japan,” he predicts. The fact that more people will have thought about who the Olympics are meant to be for “would be one of the few positive legacies of the troubled event,” he adds.

In Ofunato, Ms. Konno says she has done that thinking, and come to her own conclusion.

“This time, we have had a good opportunity to think deeply about what these Olympics are for and for whom,” she says. “I want the games to be held for the sake of the athletes.”