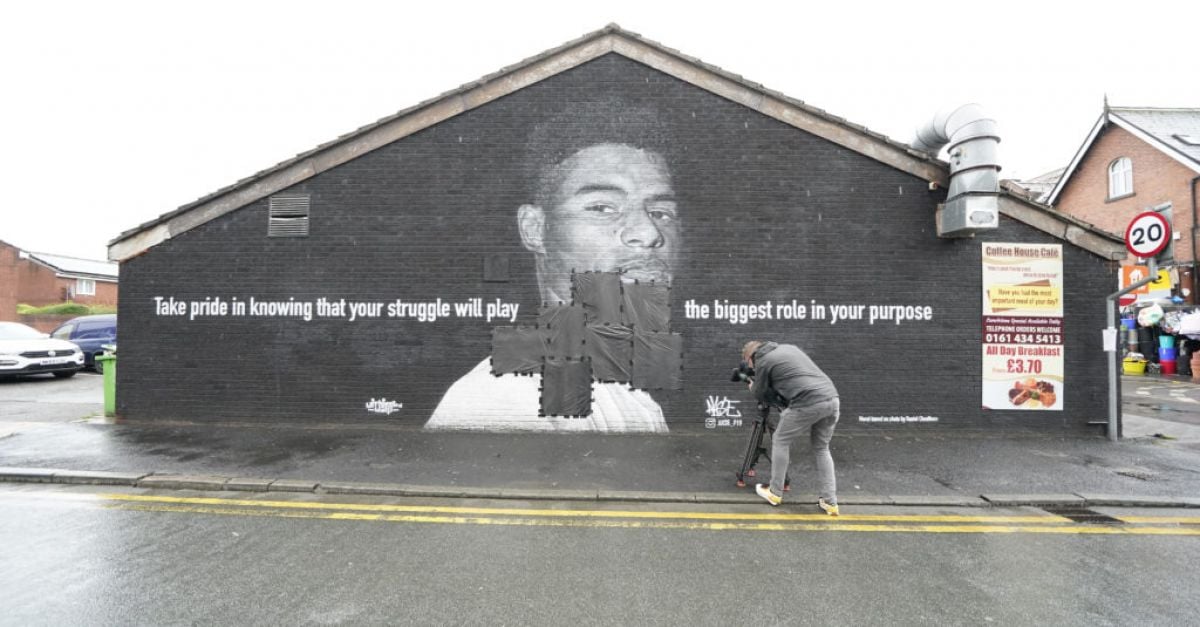 A mural in honour of Marcus Rashford was defaced in Manchester within hours of his missed penalty in the Euro 2020 final in what police are treating as a racist incident.

The word “F***” was scrawled over the huge artwork of the England footballer, painted on the side of a cafe in Copson Street in Withington, south Manchester.

The words “s**t” and “b****rd” were also graffitied beside the word “Saka”, the 19-year-old player whose final penalty miss gave Italy victory.

Rashford, Bukayo Saka and Jadon Sancho, who also missed a penalty, were all targeted with racist abuse on social media after the game.

Greater Manchester Police (GMP) said they were called at 2.50am on Monday to reports of the racially aggravated damage to the mural.

Chief Superintendent Paul Savill said: “This is disgraceful behaviour and will absolutely not be tolerated.

“Greater Manchester prides itself on being made up from a number of diverse communities, and hate crime in any form is completely unacceptable and not welcome here in our city.

“GMP takes crimes of this nature very seriously and an investigation has been launched.

“If anyone has any information that could help us to identify this offender, please do not hesitate to speak to police.”

The graffiti has since been covered over.

#APPEAL | Police are investigating after a mural in #Withington has been vandalised. https://t.co/yQsSm0zfZI pic.twitter.com/hkTMGELKYD

The mural, based on a photograph by Daniel Cheetham and painted by street artist Akse, was created last November in collaboration with Withington Walls, a community street art project.

It was reportedly commissioned in recognition of the Manchester United player’s work to tackle child food poverty.

Rashford’s mother provided the quote on the mural, which reads: “Take pride in knowing that your struggle will play the biggest role in your purpose.”