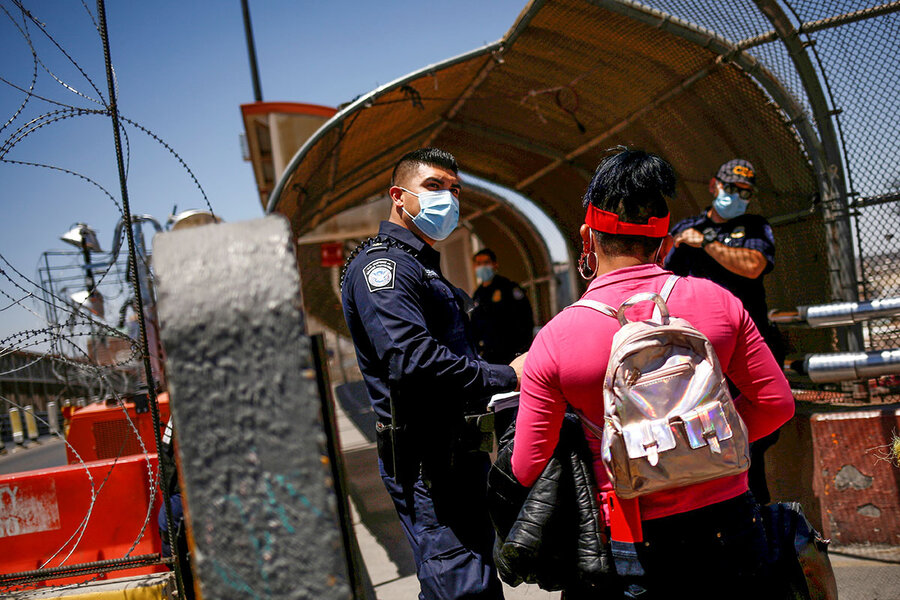 After a surge of migrants into the United States captured headlines earlier this year, the politics of the southern border has come roaring back.

Perhaps most consequentially, the Biden administration is planning to phase out a pandemic-related, Trump-era restriction on U.S.-Mexico border crossings – one that allows the U.S. government to turn back most migrants before they can seek asylum.

Plans to lift this public-health restriction, known as Title 42, have sparked concerns of a new surge of migrants at the border. Already, the U.S. is on track to see the most apprehensions on its southern border in 20 years – though many are repeat border-crossers, precisely because of Title 42.

Ending Trump-era restrictions at the border while trying to chart a middle-of-the-road immigration policy, President Joe Biden has struggled to please either side.

Meanwhile, seven Republican governors have pledged to send small but symbolically meaningful contingents of National Guard troops and state police to the southern border, after a request for help from the GOP governors of Texas and Arizona. In South Dakota, a Republican mega-donor is footing the bill for the state’s deployment.

All of this follows a promise by Gov. Greg Abbott of Texas to use state money and crowdfunding to finish building the border wall that former President Donald Trump started. Like the border deployments, the wall effort is largely symbolic, given that any attempt to build a complete wall would be virtually impossible. The cost would be prohibitive, and most Texas borderland is privately owned.

The 2022 midterm elections are 16 months away – and the 2024 presidential election farther still – but the political jockeying is well underway, and the southern border is a topic of intense focus. It’s an Achilles’ heel for President Joe Biden, as his administration feels the squeeze from both the left and the right. Competing values undergird each side.

Liberals are upset that, in their view, the new Democratic administration hasn’t done enough to help those fleeing extreme hardship. Conservatives are focused on an issue that goes to the very heart of what it means to be a sovereign nation, the integrity of the borders. Immigration was central to Mr. Trump’s victory in 2016, and will be key to Republican efforts to retake Congress in 2022 and the Oval Office in 2024.

Not coincidentally, Governor Abbott and two of the governors sending forces to the border – from South Dakota and Florida – may be eyeing presidential runs.

“This is a winning issue for the Republicans in three ways,” says Mark Jones, a fellow in political science at Rice University’s Baker Institute in Houston. “It motivates the base, it’s a winning issue with the median voter; and it causes infighting within the Democrats.”

The latest ABC News/Washington Post poll shows President Biden with an overall 50% job approval rating, but only 33% of Americans approve of his handling of the immigration situation at the U.S.-Mexico border.

The anticipated Biden administration plan to effectively reopen the southern border by gradually phasing out the use of Title 42 public-health authority centers on the waning of the pandemic.

In March 2020, when much of the U.S. went into lockdown, the Centers for Disease Control and Prevention invoked Title 42, sending most people crossing the border illegally – including asylum-seekers – back to Mexico. The idea was to avoid the spread of COVID-19 in crowded U.S. detention centers. Exceptions were made for unaccompanied minors on humanitarian grounds, which had the effect of increasing the numbers of children showing up at the border without an adult present.

Advocates for migrants saw the Trump administration policy as a backdoor way to shut down the border and deny migrants what they see as the right to an asylum hearing. When Mr. Biden took office in January, he immediately ended the Trump-era national emergency on the southern border and the diversion of funds from the Department of Defense to border wall construction.

On June 1, the administration officially ended the Trump-era program known as the Migrant Protection Protocols – dubbed “Remain in Mexico” – which had sent thousands of asylum-seekers back to Mexico to await their immigration court hearings. After the Title 42 border restriction was implemented, MPP was largely dormant, as few new asylum claims were being processed. But the point is that even as the Biden administration ended some Trump-era immigration policies, it held onto another – Title 42.

This middle-of-the-road approach seems to have satisfied no one.

“They’re approaching border security in a new way – a way that keeps us safe and secure, and treats people compassionately. That’s what the public wants,” Mr. Noorani says. “They need to lean into and own the term ‘security’ and define it on their own terms.”

But when it comes to GOP state efforts to take immigration matters into their own hands, analysts note a number of hindrances.

In the case of governors deploying their own troops to border states, the numbers suggest it’s mostly symbolic: 50 National Guard troops from South Dakota and 125 from North Dakota, 50 state police from Florida, and 14 Ohio highway patrol officers.

As for the Texas governor’s pledge to continue building the border wall, Mr. Jones of Rice University points to the major hurdles.

“The state just doesn’t have enough money to build more than a couple miles of wall,” he says. “And in Texas, almost all the land is privately owned – which means the only way you can build the wall in Texas is through eminent domain or convincing ranch owners to allow you to do it.”

With a few exceptions, he doesn’t see ranchers going for that.

“They don’t want an insecure border, obviously, because they live on the border,” Mr. Jones says. “But on the other hand, they also don’t want a big wall running through their ranch, separating 500 acres on one side, 200 acres on the other.”

Mark Krikorian, a longtime hard-liner on immigration, agrees that the Texas border wall plan is unrealistic and that there’s not much state troopers and the National Guard can do to fight unlawful immigration.

“But I wouldn’t describe those moves as pure theater,” says Mr. Krikorian, executive director of the Center for Immigration Studies. “They’re a vote of no confidence in federal immigration policy, and that’s important politically.”

The Public Health Service Act, under Title 42 of the U.S. Code, was originally enacted in 1944, in part to establish the authority of the federal government to set a quarantine.

“It’s not necessarily a statute that was envisioned as being used for immigration control,” says Jessica Bolter, an associate policy analyst at the Migration Policy Institute, a Washington think tank.

Between March and October 2020, more than 200,000 migrants were turned away at the U.S.-Mexico border under Title 42 without the typical process to claim asylum.

Now, Title 42 is being applied to a decreasing share of migrants, says Ms. Bolter, though the policy is still leading to expulsion with the majority of migrants. “That’s because so many single adults are still being expelled,” she says. The Biden administration is expected to begin phasing out the policy this month, but uncertainty lies ahead.

“Under Title 42, there are actually fewer consequences for single adults who illegally crossed the border than there were prior to the policy being implemented,” Ms. Bolter notes. The statute lacks the record-keeping of the formal removal process and returns migrants into Mexico – where they can reattempt entry into the U.S. more quickly and without the cost of being returned to their country of origin.

The administration has discussed changes to the asylum system to allow cases to be processed more quickly. But any such change would go through an extensive public notice and comment period before implementation. That means, for a time, migrants arriving without an expeditious process in place.

“If something like that is implemented in the future,” says Ms. Bolter, it could “mitigate some of these periodic surges that we’ve seen.”