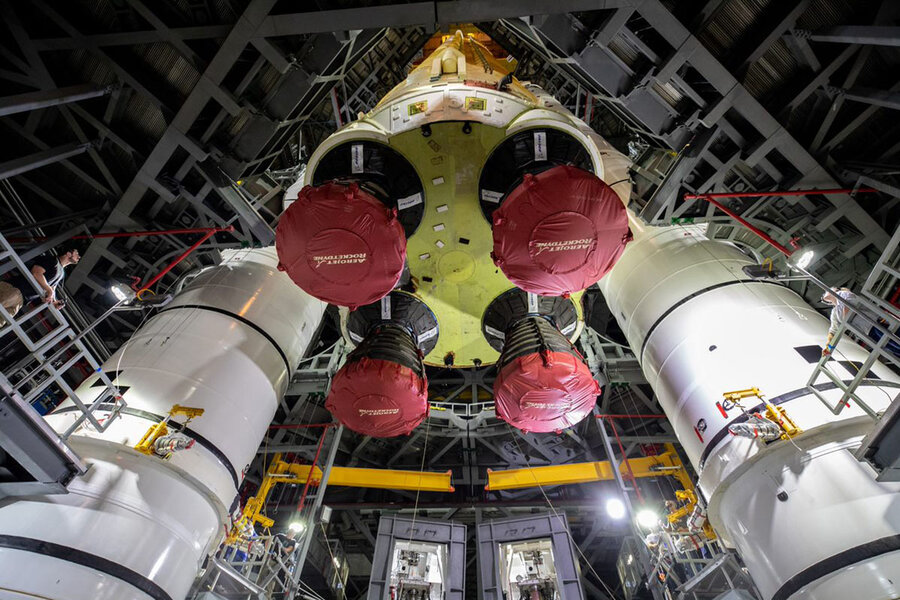 “It’s fascinating to think we may now be moving into that era of exploration that we’ve seen in the Antarctic,” says Robert Massey, deputy executive director of the Royal Astronomical Society, “where you could have astronauts on a permanent base on the moon doing six-month shifts.”

The renaissance is partly scientific, and partly a new kind of space race, with different players and goals from the Cold War version. At the pinnacle of lunar exploration in the late 1960s and early 1970s – the only time humankind has ever set foot on Earth’s satellite – the moon was largely a symbol of geopolitical power. Today, it is a base camp for humanity’s first steps off the planet – a place to study, learn, and move onward.

“We’re going back to the moon in preparation for going to Mars,” says Bill Nelson, NASA’s administrator.

“We’ve got to develop a lot of new techniques and technologies in order to go all the way to Mars,” he adds. “We’ve got a lot of stuff we can do on the moon in preparation to sustain life on the way to Mars and to bring home our astronauts safely.”

Among the different initiatives:

The first launch of the SLS is slated for this year, with a human landing on the moon earmarked for 2024. NASA has christened this new wave of lunar exploration its Artemis program. Russia and China have recently announced a similar collaborative effort. They plan to build the International Lunar Research Station somewhere on the moon. The hope is to have human visitors by the mid-2030s. The European Space Agency (ESA) has started Project Moonlight, an effort to build a constellation of satellites around the moon for navigation and communications.

Some observers have spoken of a “second space race” pitting the United States against China and Russia.

“I think that’s alarmist rhetoric; it has a lot of baggage,” says Todd Harrison, director of the aerospace security project at the Center for Strategic and International Studies, a Washington-based think tank. “The previous space race between the U.S. and the Soviet Union was an outright competition about being first. Now, it’s … about who’s going to have the best coalition of countries.”

The Artemis program seeks to lay down guiding principles for the civil exploration and use of space, starting with the moon but extending to Mars, asteroids, and comets. To date, 12 countries have embraced the Artemis Accords.

Russia and China, meanwhile, are inviting international partners to join them in their moon-base project.

Some countries are considering joining both coalitions. While several European countries have agreed to the Artemis Accords, the ESA is in talks to join China and Russia. The United Arab Emirates is likewise negotiating with Russia and China, having already joined the Artemis Accords.

The prize for the broadest, most diverse coalition is to lead the way in setting the norms for behavior in space. Other countries can’t be stopped from behaving in different ways, but the leaders can set parameters.

That’s key, given the goal of this round of moon exploration: learning how to operate on a celestial body, how to create a self-sustaining outpost, and, then, how to take this knowledge and expertise to Mars and beyond.

The first step out from Earth, however, will be a practical one. Explorers will have to find water on the moon, not only for drinking, but also potentially for breathing, cooling equipment, and rocket fuel.

The lunar surface is littered with craters, and, at the poles, the floors of these never see the sun. The resulting temperatures are some of the lowest in the solar system, and so could hold frozen water.

The first target of the Artemis moon landing will be the south pole, an area far from the Apollo landings but one that has been more thoroughly investigated robotically than any other. The idea of going somewhere new excites scientists.

“People think we’ve already been there and done that, so why do we need to go back again?” says Natalie Curran, a research scientist and principal investigator at NASA’s Goddard Space Flight Center. “Take Apollo 11, for instance: They only spent a few hours on the surface, and you could put the whole region they landed and walked on in half a football pitch.”

The surface of the moon is a “phenomenal laboratory of solar system history,” she says.

The Earth has plate tectonics, which gradually shift and distort the surface, as well as winds and oceans that erode the evidence of past events. The moon is comparatively pristine, its surface a record of impacts from asteroids, comets, and meteors. The largest impact basin lies at the south pole – the South Pole-Aitken basin – and is 1,550 miles wide and more than 5 miles deep.

This history can teach us much about Earth, such as the major-impact event believed to have wiped out the dinosaurs. But it can also help us understand the story of our solar system, providing insights into the evolution of the sun. Solar particles have been implanted in the lunar surface over billions of years.

In the end, says Dr. Massey of the Royal Astronomical Society, there is “an enduring cultural interest in the moon.”

“You can see mountains and craters and valleys,” says Dr. Massey. “It looks like somewhere you could explore. … And as soon as you have a telescope, you see a real world, a real landscape, and I’m sure that’s a driver for our interest.”