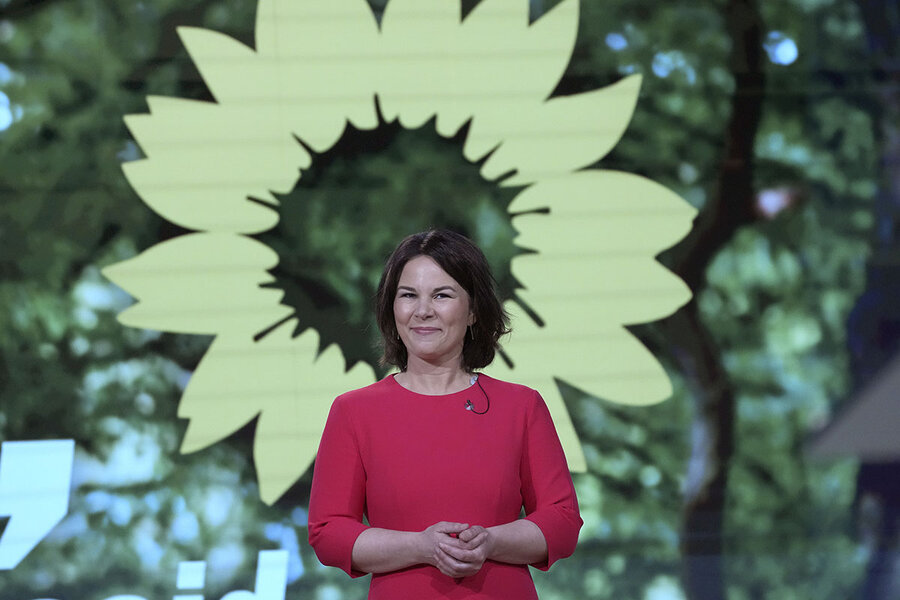 When he was a teenager, Olaf Bursia felt he had the right answers about the future. That was when he joined the fledgling Greens political party, with its reputation for environmental radicalism, in his hometown of Dusseldorf.

But in the 30 years since, the Greens have moved into the mainstream. The party, once dismissed as fringe, now has a platform of combating climate change, being more inclusive of migrants, and promoting social equality. The Greens have flirted with the top spot in countrywide polling and have put forth a 40-year-old working mother for chancellor in this September’s federal elections.

Now, Mr. Bursia feels that a good chunk of Germany finally sees his way of thinking.

The German Greens party, which stands a fighting chance of winning the next elections, could herald a changing of the generational guard, driven by new values on everything from taxes to the environment.

“Our candidate, Annalena Baerbock, is a woman who has modern answers for our time,” says Mr. Bursia. “I am a father, she is a mother, and we are about the same age. We have had a similar upbringing. We experienced German reunification, and we’ve experienced a world crisis like climate change. … Our generation has taken over leadership in NGOs and so many other parts of society – but not yet in politics. This is my generation currently trying to take over the wheel.”

With Chancellor Angela Merkel stepping down after a 15-year reign, the outcome of the elections will hint at not only Germany’s future direction but also what values will be at the helm of the European Union. And the Greens, for the first time, have a realistic chance at ending the domination of Ms. Merkel’s Christian Democratic Union (CDU) and its rival Social Democratic Party over German governance, and replacing it with a new crop of voices that trend progressive, younger, and female.

“We’re not a movement anymore – we are part of the system,” says Ekin Deligöz, a Green member elected to parliament in 1998. “Where will society be in 10 years? What does ‘quality of life’ mean for us? How do we overcome the gap between rich and poor? What’s the role of German technology? Germany is the fourth richest country in the world – what’s our role in Eastern Europe and the world? These are the questions of the future, and you need courage to go there.”

A bigger tent in a more diverse society

Ms. Deligöz, the Green parliamentarian, grew up straddling two disparate worlds. Born in Turkey, she migrated to Germany in the late 1970s with her parents. She didn’t speak German, and attended Turkish schools separate from the native German population. Turkish children, like their parents who arrived as guest workers, weren’t expected to integrate and become part of German society.

She was the first migrant to attend her gymnasium, as Germany calls its elite secondary schools that fast-track into higher education. “Everyone looked at me as a strange person,” Ms. Deligöz says. “I was always searching my way through two systems and where I belong. A lot of my [immigrant] generation got lost.” The inequity she saw growing up shaped her propensity for politics.

She found the Greens, joining the party as a teenager growing up in Bavaria. “If you see something not right, you’re searching for the ways that might be right in society,” says Ms. Deligöz. “The Greens didn’t close doors [or] say to me, ‘You have to accept that you’re not part of us.’” The party’s expansive, open tent ushered her all the way through her teen years, into adulthood, and finally into German parliament, where she’s been an elected member since 1998.

Women are highly educated and want to work, and the economy depends on their labor. New migrants are getting educated, becoming German, and must better integrate into the fabric of society, Ms. Deligöz says today. The CDU, she says, has stagnated when it comes to digitizing Germany, boosting the innovation economy, and tackling a climate change crisis.

“It’s hard for some old white guys to be told that ‘your time is gone, in the past, and you have to accept it,’” she says.

A day in the sun, or a sea change?

In April, the Greens were leading in a number of polls, an astonishing turn for a party that typically dealt in the single digits while the CDU usually gobbled up north of 30%.

Voters were dissatisfied with the CDU-coalition-led government’s handling of the coronavirus and its vaccination missteps, which underscored the Greens as a viable alternative. The Greens’ platform is progressive, promising to usher in individual income tax increases and billions in new spending, and upping the carbon tax, among other proposals. The party’s surge feels gratifying for longtime adherents and new joiners; membership surpassed 100,000 in 2020, making it the third largest party in Germany. Meanwhile, the Greens doubled their online spending to 2.5 million euros.

By contrast, the CDU has lost half its membership over the last three decades, and forging strong coalition partners has become more and more important. Its 60-year-old party leader, Armin Laschet, is the son of a coal-mining engineer, and a longtime politician who’s good at bringing people together.

The latest weekly poll has the CDU back in the lead, with roughly 28% to the Greens’ 17%. It’s a long way until September’s election, of course, but the CDU’s power machine is back in play, political experts say, and it doesn’t easily give up ground.

Ms. Baerbock has been roundly attacked by opponents online and in the media for everything from exaggerating details on her résumé to failing to pay taxes on a holiday bonus. It’s territory that comes with being a threat to the status quo. Yet her party’s progressive positions mean she also must play to the mainstream, and she’s taken pains to assure Germany’s powerful corporations they won’t be unfairly penalized under Green leadership.

“There is traditionally a lot of continuity in foreign and European policy,” says Mr. Reinecke. “Voters are conservative; they don’t like to vote governments out of office. This has happened only three times since 1949. Moreover, after the pandemic there is a need for normality, not change.”

CDU voters have sensed this turnaround in the Greens’ early 2021 momentum, and the question of the political hour will likely switch to what parties will be part of the governing coalition. No single party is large enough to govern alone. So will it be a “black-green” coalition of the “old and new bourgeoisie”? as Mr. Reinecke puts it, referring to the CDU (whose traditional color is black) and a Greens party that now does best with educated urban dwellers. The CDU in concert with the Greens could be consequential indeed, restructuring the economy toward climate neutrality with as little economic and social change as possible.

“The Greens stand for the promise that the 1.5 degree target [to limit global temperature increase under the Paris Agreement] will be seriously pursued, while [the CDU stands] for the promise that diesel cars will continue to be built and cheap meat will be sold in the supermarket,” says Mr. Reinecke. “Black-green also suits German industry. Now almost all CEOs realize they’ll look bad in the world market without eco-remodeling.”

Yet longtime CDU member Eckhard Finke believes the Greens are so focused on climate change that they forget about the economy, “such as the future we face with China. There are also social problems we need to deal with. We need to have a good mix and balance. These topics are all connected and to be able to see this connection is central to finding the best way forward for society, but also for Germany as a country within Europe.”

The CDU’s candidate, Mr. Laschet, is the best person to guarantee this balance, says Mr. Finke, who lives in Lotte. “He represents the middle, and that is very important for me.”

“Without our ideas, they will get lost”

Regardless, the Greens’ surge is indicative of a movement that’s permanently entered the mainstream consciousness. Its urbanism, inclusivity, and climate-aware platform resound with a younger generation, whose political power will only grow.

The powerful German multinationals know it: BMW and Allianz, for example, are calling the Greens now, says Ms. Deligöz, the Green parliamentarian. “They called me and told me they want to talk about how they can modernize our companies to become family-friendly, to become interesting for good, educated women. They know that they need our ideas to keep up with the future. Without our ideas, they will get lost.”

For Samy Charchira, a Dusseldorf city politician who was born in Morocco and came to Germany at age 14, Ms. Baerbock and the Greens represent a new understanding of politics. “The classic roles – right versus left, male-dominated, Western-dominated – this form of political engagement just doesn’t work anymore,” says Mr. Charchira.

“It doesn’t correspond with our reality. We have a new zeitgeist in politics.”