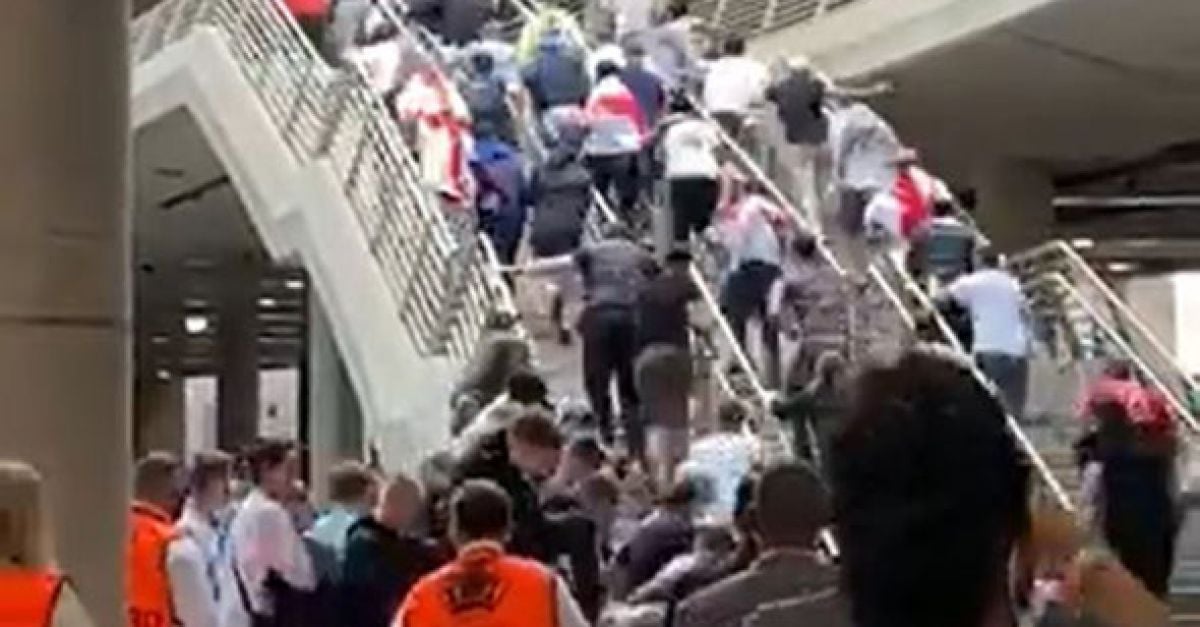 UEFA has opened a disciplinary investigation into the chaotic scenes at the Euro 2020 final at Wembley.

Individuals without tickets breached security at Wembley, and Football Association chief executive Mark Bullingham said on Monday that a full review would take place into what had happened.

He accused “drunken yobs” of trying to force their way into the stadium without tickets.

A UEFA statement on Tuesday afternoon read: “In accordance with Article 31(4) DR, a UEFA ethics and disciplinary inspector has been appointed to conduct a disciplinary investigation into events involving supporters which occurred inside and around the stadium.”

Statement from The @FA. pic.twitter.com/x1uCcGEOWe

UEFA has also charged the FA over a pitch invasion during the match, and over the throwing of a firework, the throwing of other objects and disturbing the Italian national anthem.

Article 16 of the regulations covers order and security at UEFA competition matches. The recommended disciplinary measure for first offences related to the admission of spectators, the screening and searching of spectators is a warning.

First offences for other stadium security issues come with a recommendation to issue fines ranging from 5,000 to 15,000 euros. These include offences which relate to spectator control, public passageways, doors and gates and protection of the playing area.

The FA said on Monday its review would be conducted alongside the Metropolitan Police, the Greater London Authority, the Safety Advisory Group and tournament stakeholders.

The scenes at @wembleystadium away from the pitch on Sunday were saddening to witness. Read our full statement via the link below. https://t.co/IPaJ7I6viS pic.twitter.com/xSeA2pi7Xo

The governing body defended the level of stewarding and security in place for the match, saying it “exceeded the requirements for the match” and was “greater than any other previous event at Wembley Stadium”.

A spokesperson added: “The behaviour of the people who illegally forced their way into the stadium was unacceptable, dangerous and showed total disregard for the safety and security protocols in place.

“No steward or security staff should be subjected to this type of behaviour and we thank them for their support on the night.”

There have been eyewitness reports of ticketless people being inside the stadium for the whole match, and of genuine ticket-holders being afraid to confront people occupying their seats.

Disability access charity Level Playing Field has expressed its concern at the events of Sunday, and warned that they could have been “catastrophic”.

It issued a statement on Tuesday, which said: “Hearing that people were ‘packed’ into the ‘disabled area’ is worrying and should never happen.

“The issues at the final last Sunday could have been catastrophic for all fans but particularly disabled supporters caught in the violence or injured as a result of reported breaches at the accessible entrance and wheelchair user viewing areas.

“We know from the feedback we have received already that this has left some disabled supporters feeling extremely uneasy about attending live sporting events.

“Level Playing Field has sought assurances from Wembley Stadium and the Metropolitan Police that a thorough and detailed investigation will be undertaken, including the impact on disabled fans.”

The FA was fined last Saturday after a laser pointer was shone in the face of Denmark goalkeeper Kasper Schmeichel as he prepared to face a penalty from Harry Kane during last Wednesday’s semi-final at Wembley.