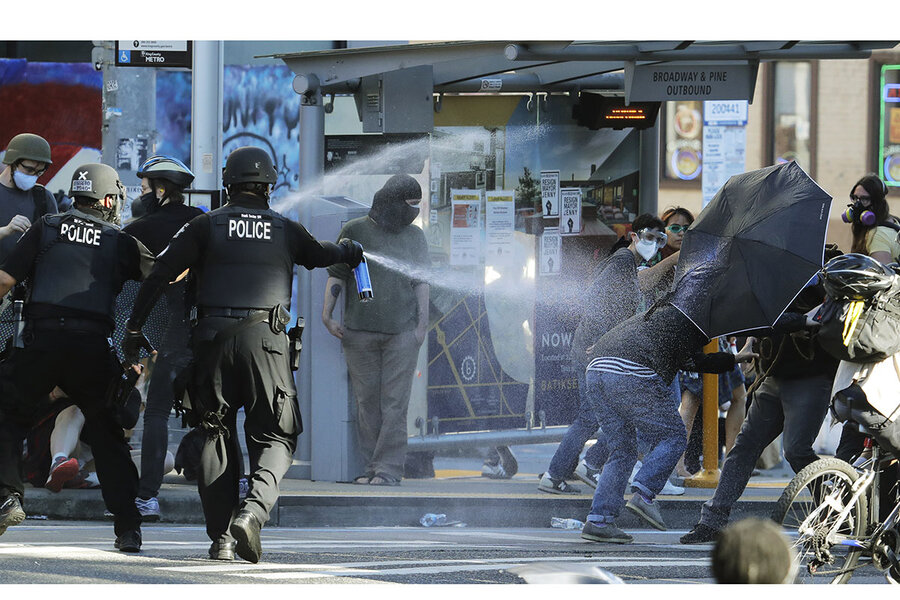 Policing as it is practiced in the United States today is not deep rooted. It is largely the creation of the past 50 years – a push and pull of reforms often undone or overshadowed by aggressive approaches favored amid social unrest or high crime.

The country stands at a new pivotal moment. George Floyd’s murder launched a sustained period of pressure for reform. But a new crime wave has deepened the mindset that gave rise to mass incarceration and increasingly militarized tactics.

There is rich opportunity to imagine a more nuanced approach, experts say. But it requires understanding how the arc of policing brought the nation here in the first place.

“We have a big hill to climb [to reform policing], and what’s striking is that we’ve built this hill just over the past few decades; this is a new hill,” says Brandon Garrett, a professor at Duke University School of Law. “We didn’t routinely stop 20 million people a year for minor traffic stuff. Police departments didn’t pad their budgets with mass arrests. And the pandemic only clarified the question: Why do we have police lay their hands on people and put them in cells for minor misconduct?”

But it was also reflective of changes in policing.

What has shaped modern policing

In addition, the rise of the car culture brought massive increases in traffic stops – each one a potential arrest and flashpoint.

All these trends played out first through a local lens. Police departments evolved in the same way communities evolved, since each police department is local and reflects the power structure and dynamics of that community.

“When you look at how the law has influenced policing, including Supreme Court decisions, local governments, and national politics, and everything, you come to realize that rather than the modern police not reflecting the community that it polices, the problem is almost always that it does,” says Michael Scott, a former police chief of Lauderhill, Florida.

Yet there have been cumulative effects. Poorer neighborhoods bear the brunt of what experts call over- and under-policing: lots of petty arrests, low clearance rates for murders.

At its core, the evolution of policing remains “very much about both race and class control,” says Matthew Clair, a sociologist at Stanford University.

How reform can be derailed

But the recent history of policing is not all in one direction. The past 50 years have also been studded with dramatic police reforms, driven in part by high-profile incidents like the beating of Rodney King in 1991. These reforms have often progressed on parallel tracks for a time. The problem, some observers say, is that they have been too easily derailed in tough times.

The day before the 9/11 terror attacks, the No. 1 issue in public safety was racial profiling. A day later, counterterrorism reigned, meaning, as Mr. Scott says, “to hell with the rest of police reform. We just need the police to take stronger control over people’s behavior and conduct.”

This means crucial progress can be lost or put on hold.

“We find ourselves a decade and a half [after 9/11], having largely neglected [the community policing] movement, all of a sudden civil unrest breaks out again over racial issues,” adds Mr. Scott, now director of the Arizona State University Center for Problem-Oriented Policing. “And since the police have not much of a relationship with the community to rely on, they bring out the military hardware and riot control tools – all the techniques and strategies that they have been amassing mostly for counterterrorism.”

The effort to find a balance is evident in Washington. On Monday, President Joe Biden met with Attorney General Merrick Garland and several local leaders from across the U.S. to discuss a “comprehensive strategy to reduce gun crimes.” It includes both strengthening police departments and prioritizing reforms like community policing.

The winding road to “a people’s police”

Back in 1966, a police officer responding to a noise complaint about his mostly Black band unleashed a barrage of racial epithets. “Never will I do that,” he recalled thinking of policing as a career.

Yet a few years later, he saw the other side after he did become an officer. When he was a rookie, an assistant district attorney grilled him for making a false arrest – because a man had called him a “pig.”

Over his years in policing, Mr. Stamper has seen the push and pull of reform and retrenchment play out in his own career again and again. In San Diego, he pioneered community policing. In Seattle, he resigned as police chief after he allowed tear gas to be used on protesters during a World Trade Organization meeting in the city in 1999.

His own winding path has led him to reflect on the simultaneous humanity and cruelty of law enforcement.

“I had come on the force thinking we could make it a people’s police, which sounds like leftist radical propaganda, but which is something I believed in even more deeply once I got my comeuppance from my own malpractice as a rookie police officer,” he says.

“I have had an opportunity to see policing through the eyes of those who have been opposed to it and those who have been blind supporters of it,” he adds. “There are these sorts of continuous examples of police use of excessive force, particularly against young people, poor people, and people of color, which produces this incredible tension between cops and citizenry.”

But this journey for the police has brought the country to a significant moment, he and others say. The rise of mass criminalization has brought more people into the system, which has ironically created more momentum for reform.

“People are collectively realizing this is too much and that we need to fundamentally at least scale down the system, if not fundamentally change and transform the system,” says Dr. Clair of Stanford and the author of “Privilege and Punishment.”

Abolishing the police “is not rational,” adds Mr. Stamper. “Yet all the emotions associated with so-called bad police shootings – the anger, the fear, the heartbreak – is exactly what we need to continue this conversation. One of the things that comes up for me is that for the first time in my adult life I have hope.”