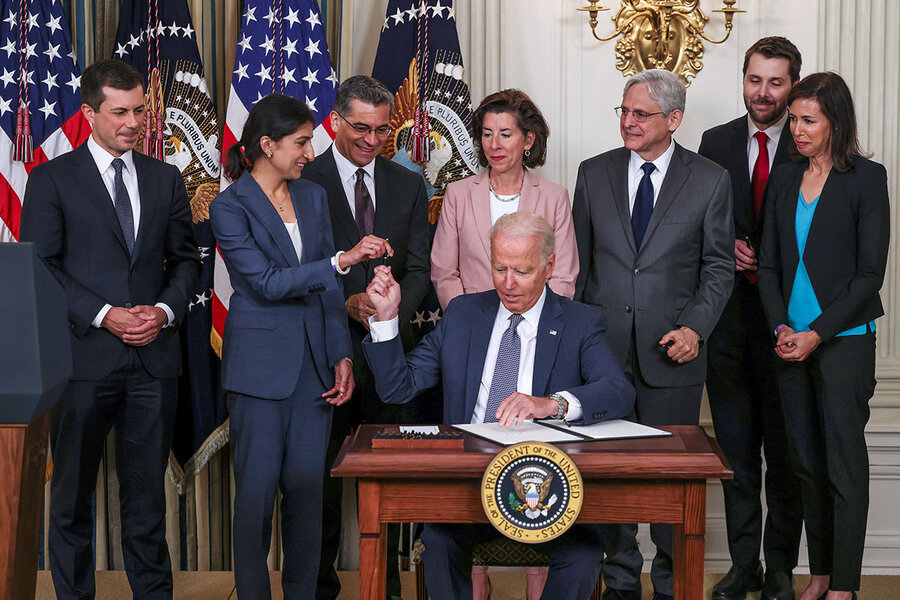 Frictions have only grown after President Joe Biden signed an executive order on July 9 calling for actions – including by the FTC – to stem an erosion of marketplace competition.

“[Ms. Khan’s arrival] is a real philosophical change. It’s one of those moments in history where things turn in a significant way,” says Matt Stoller, director of research at the American Economic Liberties Project.

What is the FTC’s antitrust role, and how has it evolved?

The FTC was established in 1914 in the aftermath of the breakups of companies like Standard Oil and American Tobacco, which were declared illegal monopolies by the Supreme Court. The independent agency was set up as a central government arbiter on fair commerce, with the power to both investigate questionable trade practices and also to regulate them.

Although the FTC was initially weak, with critics accusing it of fostering monopoly power instead of fighting it, its authority and activism expanded under President Franklin Roosevelt’s New Deal.

By the 1980s, however, backlash to the FTC’s authority had built, resulting in the emergence of a new “consumer welfare” theory that held that corporate mergers should only be prevented when it is clear that consumers would be harmed as a result. This now-dominant view has faced rising skepticism in the current era of Big Tech giants and consolidation in industries from banking to hospital companies.

Where does Lina Khan want to take the commission?

Ms. Khan, who came to fame by publishing a 96-page treatise on how “Amazon has marched toward monopoly by singing the tune of contemporary antitrust,” wants to return the FTC to where it was at its height. She wrote as much in the paper, where she criticized the current approach to antitrust and called for “restoring traditional antitrust and competition policy principles.”

To that end, she has the support of two fellow commissioners – Rebecca Slaughter and Rohit Chopra, both Democrats – granting her a 3-2 majority to implement her reforms. “The FTC has broad, economy-wide authority. It can write fair competition rules across many different sectors, and it just hasn’t done it. People rightfully don’t care about it, because why would you? It doesn’t do anything,” says Mr. Stoller. “I suspect that will change under Lina.”

So far, she has done exactly that. In the FTC’s first public meeting in decades, Ms. Khan put forward a set of policies aimed at correcting “the agency’s longstanding failure to investigate and pursue unfair methods of competition,” including administrative changes that would allow the agency to more easily propose rules and conduct investigations, as well as the implementation of penalties for companies that lie about their products being “made in America.” Each passed in a party-line vote.

Now comes President Biden’s July 9 executive order, which seeks to expand the FTC’s purview over labor rules, consumer rights, and mergers. Among other things, the order asks the commission to curb the use of noncompete clauses in hiring – which prevent workers from leaving for another job in the same industry – and to set rules on tech firms’ use of customer data. Standing proud behind him as he signed the order was none other than Ms. Khan.

What might this mean for the future of Big Tech?

It may take time for the dust to clear on that question. As Congress weighs its own possible efforts to rein in Big Tech, the FTC appears to be moving ahead with Ms. Khan’s ambitious strategies. The commission is taking a skeptical eye toward Amazon’s proposed acquisition of MGM Studios – a merger that might have easily cleared antitrust hurdles in the past.

Yet Ms. Khan and her allies face a number of challenges ahead that could dampen the FTC’s ability to influence Big Tech. Already, on June 29, U.S. District Judge James Boasberg dismissed two antitrust lawsuits brought by the FTC against Facebook, saying that the FTC failed to provide enough evidence that the platform was a monopoly.

“It is almost as if the agency expects the Court to simply nod to the conventional wisdom that Facebook is a monopolist,” Mr. Boasberg added, indicating skepticism toward Ms. Khan’s more intuitionistic approach to antitrust.

For Mr. Stoller, the case is indicative of the structural opposition that the FTC will face as it pursues Big Tech. “The judiciary is not going to be friendly to her way of doing things,” he says. But the FTC has “other ways of [promoting competition], too.”