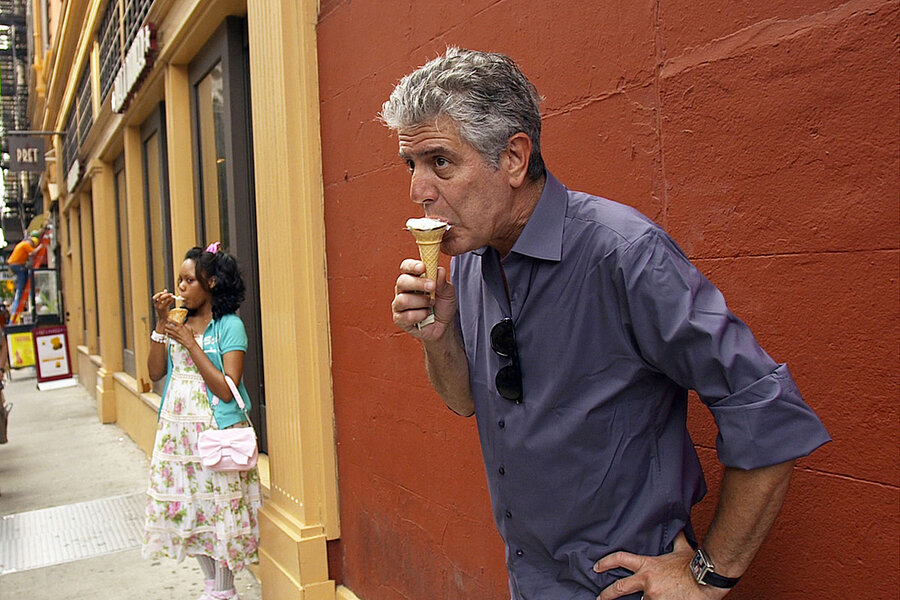 The subject of the new Morgan Neville documentary, “Roadrunner: A Film About Anthony Bourdain,” was a singular character for our time: A celebrity chef and author, Anthony Bourdain became the globally renowned host of television shows, such as “A Cook’s Tour” and “Parts Unknown,” that focused on all manner of cuisine and travel. He was fearless in his tastes: Eating a cobra heart in a Saigon cafe was all in a day’s work.

Visiting practically every corner of the planet, logging many hundreds of thousands of miles, Bourdain was an all-around adventurer, our surrogate gallivanter. Companionable yet edgy, he had the charisma of a movie star and seemed to enjoy his mission to the utmost. When he took his own life in 2018, the shock waves were profound.

Told mostly chronologically, “Roadrunner” gets going around 1999, when Bourdain – having served time as a dishwasher and line cook before becoming executive chef at a tony New York brasserie – wrote an unputdownable tell-all piece for The New Yorker that led to his runaway bestseller, “Kitchen Confidential: Adventures in the Culinary Underbelly.” By 2002 he was a fixture on TV, first for the Food Network, then the Travel Channel, and, finally, CNN.

Anthony Bourdain helped others see the world as he did. What motivated him? A new film sheds light on the late chef, who brought the public on all manner of adventures with his popular books and TV shows.

Over time, the shows became less about what he ate and more about the world as he saw it – everywhere from Congo to the war zone of Beirut – in all its fathomless mystery and awe. The opposite of a typical tourist, he especially connected with the downtrodden, never condescending to them as “exotic.” He was an advocate for social justice. At one point in the film he says, “I’m not a journalist. I’m not an educator. If anything, I like going to a place, picking one thing, and being completely wrong about it.”

Neville (“20 Feet From Stardom,” “Won’t You Be My Neighbor”) had access to over 100,000 hours of video of Bourdain, an avid and intimate chronicler of his exploits on and off camera. (His language in this R-rated movie is often saltier than his meals.) Added to this are extensive interviews with many of his friends and colleagues, and his two ex-wives.

As a result, the film has an almost voyeuristic comprehensiveness. There’s even a scene near the end with Bourdain seeing a psychiatrist. He was for a time, in his youth, addicted to heroin; he says he kicked the habit when he looked into the mirror and saw “someone worth saving.” But it’s clear from the footage and the filmed commentaries that he lived in a constant state of frenzied extremes. He rejected normalcy and yet he craved it. During his second marriage, when he became a father to a doting daughter, we see him grilling burgers in the backyard while professing that “I’m never happier than when I’m a TV dad.” And yet for most of his public career, he was willingly on the road for around 250 days a year.

The director is smart enough and scrupulous enough to avoid any amateur psychologizing in this film. He implicitly dispels the notion that Bourdain’s suicide was in any way something to be romanticized, or that it was the inevitable result of achieving his wildest dreams. Although Neville obviously had the cooperation of many in Bourdain’s inner circle, the film never feels authorized or hagiographic. He allows for Bourdain’s inner darkness.

Neville isn’t trying to “solve” Bourdain, and so, in his own way, he proves himself as open to the vast complexities of experience as his subject was. Bourdain was a larger-than-life figure who, for whatever manifold reasons, was finally pulled down by his own life. For me, his legacy lives on here in those moments when he gasps at the sight of some far-flung landscape or enters ardently into a street scene thronged with humanity. He looks like a man lit up by his own rapture.

Peter Rainer is the Monitor’s film critic. “Roadrunner: A Film About Anthony Bourdain” is available in theaters on July 16. It will air on CNN and stream on HBO Max later in 2021. It is rated R for language throughout.