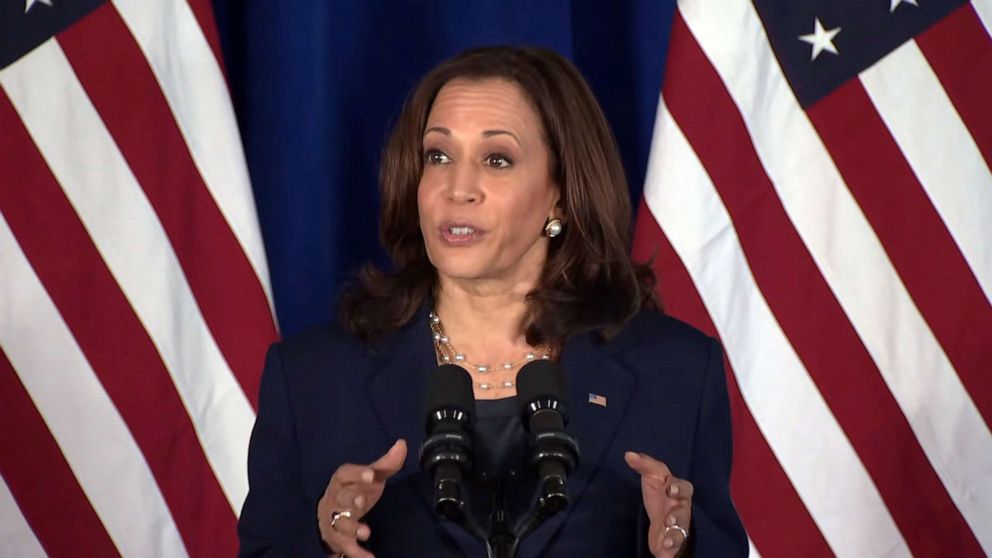 Vice President Kamala Harris announced on Thursday that the Democratic National Committee is investing an additional $25 million in its voting rights initiative, underscoring the Biden-Harris administration’s commitment to a cause that has become a rallying cry for the party.

“This campaign is grounded in the firm belief that everyone’s vote matters — that your vote matters,” Harris said, flanked by two American flags.

Harris made the announcement and call to action to get out the vote at her alma mater, Howard Unversity, an HBCU, kicking off remarks by saying it’s “so good to be home.” The location was also significant in that Democrats have argued that Republican voting bills popping up in legislatures across the country are threatening to suppress historically disenfranchised communities, including Black voters.

“I want to make clear that this is about all voters, it’s about all voters. This is not about Democrats or Republicans — it’s about Americans, let’s be clear about that,” Harris said. “We want to help to make sure your vote is counted, and that is because our democracy is strongest when everyone participates and … our democracy as a nation is weaker, when people are left out.”

Back in June, President Joe Biden announced he tapped Harris to lead the administration’s efforts to protect voting rights, but efforts for sweeping legislation at the federal level have stalled in Congress.

“Folks, it is never too early to defend your rights,” Harris said Thursday. “With these new laws that have been passed, or they’re trying to, we have to start now to finish strong.”

She also referred to “what’s going on in Texas right now” — a nod to the special legislative session kicking off there Thursday. State legislators are at odds over an “election security” bill that Democrats argue restricts voting access. Democratic state lawmakers staged a walkout in late May to protest the GOP initiative, killing a previous bill by breaking quorum.

DNC Chairman Jaime Harrison previously announced a $20 million initial commitment to the initiative, called “I Will Vote.” Priorities USA, one of the largest Democratic super PACs that litigated over 15 voting-centric cases, has also committed $20 million to fighting efforts to curtail access to the ballot box.

Biden and Harris also met with civil rights leaders at the White House later Thursday to discuss voting rights and the effort to pass the George Floyd Justice in Policing Act. Representatives from the NAACP, National Urban League and National Action Network, among others, attended.

The $25 million will be used to fund voter education and protection efforts, targeted voter registration and technology to increase voting accessibility and combat “Republicans’ unprecedented voter suppression efforts,” according to the DNC.

“Republicans know that their policies are unpopular — and that the only way for them to hold on to power is to attack the constitutional right to vote, held by the people they swore to serve. That’s why the Republican Party has made unprecedented efforts to keep people from voting,” Harrison said in a statement. “I’ve said time and again that the ‘D’ in Democrat stands for deliver, and today we are delivering innovative and historic resources to protect this fundamental part of our democracy.”

In a statement reacting to the news, the Republican National Committee accused Democrats of spreading falsehoods to further their own agenda.

“In a desperate effort to push their federal takeover of elections, Democrats continue to lie to the American people. Democrats refuse to join Republicans in supporting common-sense policies like voter ID, because their sole agenda is more power and partisan control,” RNC Communications Director Danielle Álvarez said.

The DNC investment comes amid a nationwide Republican effort to pass what the GOP lawmakers call “election integrity” laws that often tighten voting restrictions and limit access to the ballot box. Republicans endorsing these bills often point to the diminished trust among voters in U.S. elections but fail to address former President Donald Trump’s repeated attempts to undermine the 2020 election by falsely claiming there was mass voter fraud and that he actually won in November.

In the 2021 legislative sessions alone, state lawmakers across the country introduced nearly 400 bills that include restrictive voting provisions, according to the nonpartisan Brennan Center for Justice’s analysis. At least 17, mostly GOP-led states, have enacted 28 new laws this year that at least in part restrict voter access.

On the federal level, Democrats’ attempts to fight back against these newly enacted laws have stalled. In June, Senate Republicans were united in blocking Democrats’ “For The People Act,” which would enact uniform voting and election standards for the nation. That outcome was expected, but it served as a reminder that garnering 60 votes to pass legislation Democrats consider critical to protecting Americans’ constitutional right to vote may prove to be impossible despite Biden’s pledge that “this fight is far from over.”

Litigation is proving to be one of the only ways Democrats can challenge states’ new election laws. Days after the “For The People Act” failed in the Senate, Attorney General Merrick Garland announced the Department of Justice filed a lawsuit against the state of Georgia for its new voting rights law, passed in late March. There are seven other federal lawsuits targeting that bill, which Republican Gov. Brian Kemp has defended as making it “easy to vote and hard to cheat.”