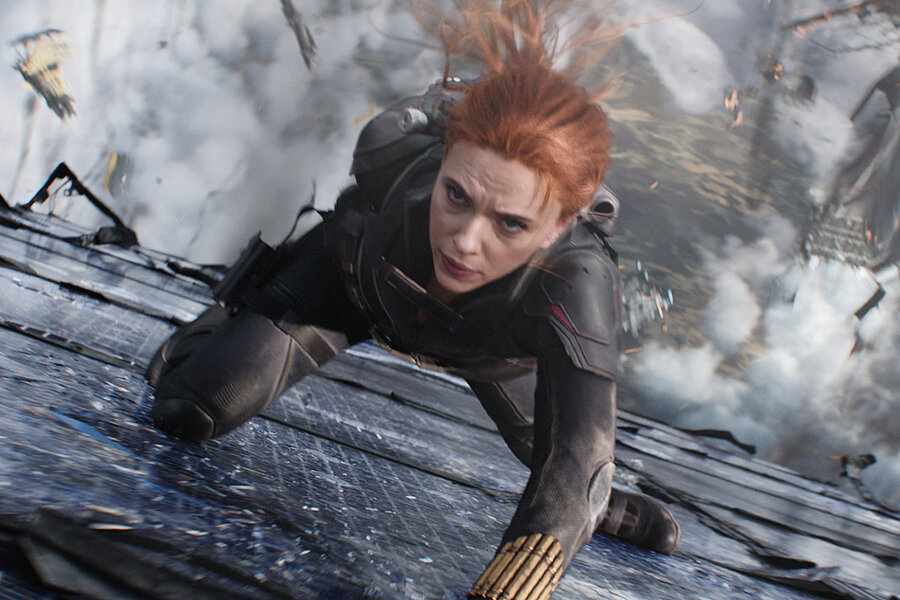 It’s not easy to be a Russian movie fan. Hollywood films, which dominate the cinematic fare available here, invariably depict the motherland in the bleakest of tones, while Russian characters tend to be pitiless, power-mad, morally vacuous villains whose chosen careers always involve some brand of evil-doing, be it mafia boss, KGB spy, seductress/assassin, cybercriminal, or just a brutish henchman.

But maybe there’s a little ray of hope in the new film, “Black Widow,” which weaves a backstory for the titular Russian character from wildly popular Marvel Cinematic Universe, aka Natasha Romanoff, played by Scarlett Johansson. It opened across Russia over the weekend, drawing half of all cinemagoers and earning about $3.3 million, which is pretty good considering that much of the country is still under tough pandemic-related restrictions.

In the MCU, Natasha, a former KGB-trained killer who redeemed herself by joining the Avengers, is already dead, having sacrificed herself for her friends in the recent blockbuster “Avengers: Endgame.” So this prequel is an attempt to delve into her origins, to illuminate the forces that created her. That inevitably leads to Russia, and her dysfunctional Russian pseudo-family, with whom she briefly reunites.

Marvel’s latest blockbuster is about former Soviet superheroes in Russia trying to deal with their past. But for Russian filmgoers, “Black Widow” doesn’t capture much of their culture or worldview.

For Russian audiences, including vast legions of Marvel fans, that holds a special interest, and perhaps a touch of hope that in the future Russian characters may not be so unrelentingly bad. Reaction from critics and fans so far suggests that most are not much interested in the feminist overtones that have dominated Western commentary, but there are distinctly mixed opinions about how it portrays Russia and Russians.

Natasha’s “family” is rooted in a fiction created by Moscow spy masters, who had set them up as “sleeper” agents in the United States. The father, Alexei Shostakov (played by David Harbour), is now a bearded and paunchy Soviet-era superhero known as Red Guardian, the counterpart of Captain America. The mother, Melina Vostokoff (Rachel Weisz), is a scientist who lives in a remote Russian cottage with a bevy of trained pigs. And Yelena Belova (Florence Pugh) is the little sister who, like Natasha, was sent as a child to the Red Room, a former KGB outfit that brainwashes young girls and turns them into heartless assassins, known as “widows.”

Without giving much away, the movie intersperses action sequences among Natasha’s efforts to gather the family. A touching reunion ensues. Then chaos breaks loose.

In general, Russian film critics have panned the movie, in part for what they describe as a hopelessly inept portrayal of Russia and Russians. But going by viewer comments to some of the film reviews, audiences are more forgiving. Many people just come for the action, and the film does not disappoint in that department.

“These Russians are just superficially created, mainly by giving them Russian names and putting them through stereotypical Russian rituals, like drinking vodka straight from the bottle in some remote Russian village,” says Roman Kovalyov, a critic with the online film journal Posle Titrov. “By now this sort of thing triggers more smiles than irritation. These tropes are very well established.”

Alexander Polozhenko, a blogger in the Siberian city of Irkutsk, agrees. “I was glad to see Natasha driving around in a [Russian-made] Niva car, and getting her mail from the Russian Post,” he says. “But I would have liked to see more Russian spirit, more Russia. But it’s not there, not even in the prison scenes. I think the producers don’t know much about the cultural peculiarities of Russia, and didn’t make any effort to find out.”

But one pseudonymous fan on the KinoPoisk film review website offered a retort to those views. “I’ll say this: just turn off your brain and enjoy. Good humor, good fights, just awesome opening (perhaps the best in all Marvel films), and sometimes unusual directing. The film is perfect for this time. Overall, I liked it,” the viewer commented.

The generally dismal image of Russians in Hollywood films has not escaped the notice of Russian politicians. Seven years ago a group of nationalist deputies of the State Duma, Russia’s lower house of parliament, tried to introduce a bill restricting the number of American movies allowed to play in Russian cinemas. But after they met with leading Russian film distributors, who complained about a massive loss of revenue if the bill passed, the whole idea was dropped. (As of 2014, Russia was the world’s seventh-largest market for film distribution.)

Still, some politicians continue to complain. “Something needs to be done about films in which everything connected with Russia, with Russian culture, is openly demonized or vulgarized in stupefyingly primitive ways,” Batu Khasikov, a senator from the southern republic of Kalmykia, told the upper house of parliament recently.

“In China, there are cases where films get banned for allegedly offensive content, but that never happens in Russia,” says Alexey Naumov, a political analyst with the business daily Kommersant. “The Russians we see in Hollywood movies are clearly not real Russians. They are lazy stereotypes. That’s why most Russians don’t care. They don’t see themselves reflected in it. … It probably helps that Russians are never shown as weak or pathetic. They are always strong, cunning, and agile. And they stand by their ideals, even if they are nasty ones.”

Russian moviegoers have a special term for films whose storyline or atmosphere just does not ring true. It’s klyukva, or “cranberry.” Reviews of “Black Widow” bristle with that term.

But some of them make a few intriguing exceptions, especially for the Red Guardian character, whom most viewers – professional critics and fans alike – appear to have genuinely enjoyed.

“Overall, this film was a sprawling klyukva, with huge plot holes and utter indifference to its own characters,” writes Alexey Litovchenko on Kinokratia, a website run by daily newspaper Rossiskaya Gazeta. “But Alexei Shostakov, the Red Guardian, is a real Russian hero. He’s a simple-minded, good-natured father who grumbles that the country has been destroyed, who tells tall tales, jokes inappropriately and likes to drink but, if necessary, will punish his enemies on behalf of his family – even if they are not real. … David Harbour in this role is incredibly organic. He turns any scene into a holiday with his immense charisma alone. We’d really like to know more about him.”

Russian audiences also appear to have liked the mother, Melina, who trains pigs, drinks hard, engages in intimate conversation with her two fictitious daughters, and ultimately joins them in the effort to take down the wicked Red Room. Indeed, by pitting themselves against their evil Soviet origins, these Russian characters appear to redeem themselves. Unlike in the standard plot of Cold War-era films, the enslaved Russian women are not liberated by exposure to Western ideals – contemporary Russian audiences would probably greet that as pure klyukva – but rather with a dose of vaporous anti-mind-control elixir.

But now that Natasha is dead, it’s clear that one of the film’s central purposes is to set up Yelena to take her place in the MCU going forward. Just about everyone agrees that Russian audiences were really impressed by Yelena, who freed herself from the evil grip of the Red Room in the film, and would welcome her fresh incarnation as one of the good guys.

“We had a time when all villains in Hollywood movies were Russians. Then they were Muslims. Now they’re Russian again,” says Kirill Razlogov, a film historian. “Maybe we’ll get to a place where there’s more balance: some good Russians, some bad ones. But I am not at all sure that Russian audiences will prefer the good ones.”