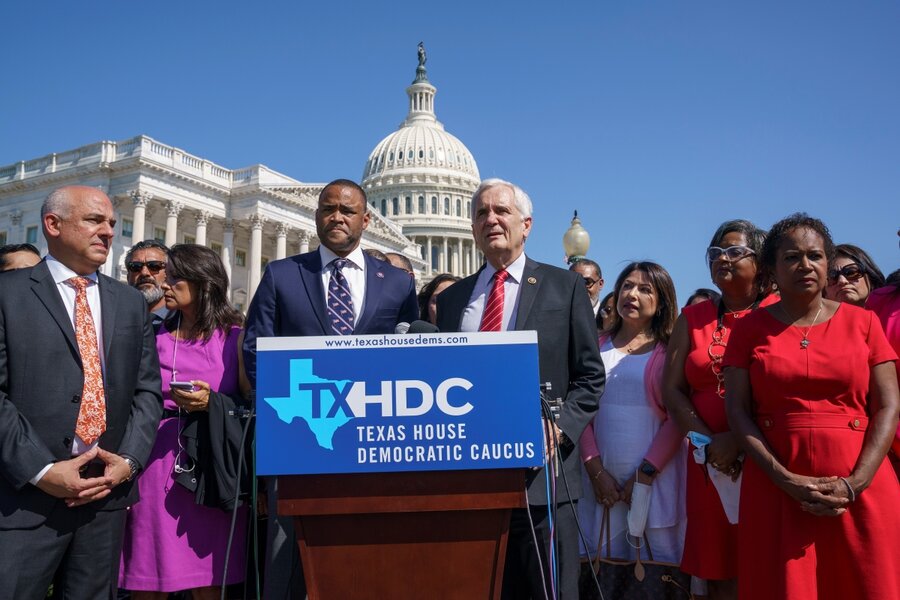 Speaking to reporters outside the Capitol, the Democrats were realistic about the limits of their gambit, noting they can hold up the GOP-backed proposals at home for only so long and arguing that only federal legislation would prevent some of the new restrictions from becoming law. In Austin, House Republicans authorized state troopers to find and corral missing legislators, while a depleted but still-working state Senate passed new voting restrictions in a show of GOP resolve.

“We can’t hold this tide back forever. We’re buying some time. We need Congress and all of our federal leaders to use that time wisely,” Democratic state Rep. Chris Turner said, gathered with his fellow quorum-breakers outside the United States Capitol.

The Democrats’ dramatic exodus was in part aimed at rallying their voters on what they see as a priority issue ahead of the 2022 midterms, and at pressuring President Joe Biden to act as federal voting legislation has stalled for months in the Senate. But just as they began getting settled in Washington, Mr. Biden appeared to tacitly acknowledge the fading hopes for the bills during a speech in Philadelphia.

Mr. Biden called efforts to curtail voting accessibility “un-American” and “un-democratic” and launched a broadside against his predecessor, Donald Trump, who baselessly alleged misconduct in the 2020 election after his defeat. More than a dozen states this year have already passed tougher election laws, but only in Texas have Democrats put up this kind of fight.

Back in Texas, Republicans in the unusually skeletal state Capitol authorized finding and bringing back more than 50 lawmakers “under warrant of arrest if necessary.” However, because state troopers have no jurisdiction beyond Texas, the move has little practical effect in the short term.

Mr. Abbott has already threatened Democrats with arrest once they come back home, which may not be until the current 30-day special session ends in August. Though that would successfully stymie the GOP’s current effort, Mr. Abbott has vowed to keep trying until the 2022 elections if necessary.

In the state Senate, where nine Democrats didn’t show up – not enough to also deny quorum – Republicans passed their version of a voting bill even though that is now as far as it can go.

After House Republicans authorized sending out troopers, a sergeant-at-arms locked the chamber doors. Four Democrats who did not go to Washington were among the lawmakers still inside, while the voting mechanisms on the desks of absent Democrats were locked. A spokesman for the Texas Department of Public Safety, which oversees state troopers and the Texas Rangers, did not comment about what measures might be taken.

The move was expected after Democrats boarded private planes Monday to deny them the quorum necessary to conduct business – namely, passing one of America’s most restrictive voting measures. Other lighting-rod conservative issues that Mr. Abbott put on the agenda – including how race is taught in schools and new abortion restrictions – also were shelved with the Legislature now at a standstill.

State Rep. Eddie Morales, one of the Democrats who stayed behind, said it was his understanding that troopers would not leave Texas.

Mr. Abbott has said Republicans will not be deterred.

“As soon as they come back in the state of Texas, they will be arrested, they will be cabined inside the Texas Capitol until they get their job done,” Mr. Abbott told Austin television station KVUE.

It was the second time that Democratic lawmakers have staged a walkout over the voting overhaul, which they say will make it harder for young people, people of color, and people with disabilities to vote. The legislation would outlaw 24-hour polling places, ban drop boxes for mail ballots and empower partisan poll watchers. Republicans say the measures are needed to fight fraud. Democrats counter that fraud is very rare and the bills target their supporters.

Texas has a history of attention-getting political tactics. Democrats, shut out of power in the Texas Capitol for decades, last left the state in 2003 in an ultimately failed effort to thwart a redistricting plan. That year, troopers went to Ardmore, Oklahoma, and asked them to come home. But they were unable to arrest the lawmakers without a warrant issued by Oklahoma authorities, and the lawmakers refused the troopers’ request.

One of the first meetings Texas Democrats had on their first full day in Washington was with Senate Majority Leader Chuck Schumer. For Democrats, the Senate filibuster rule stands in the path of sweeping federal legislation that would create national standards for voting and could roll back some restrictions that have been approved or are advancing in Republican-led states.