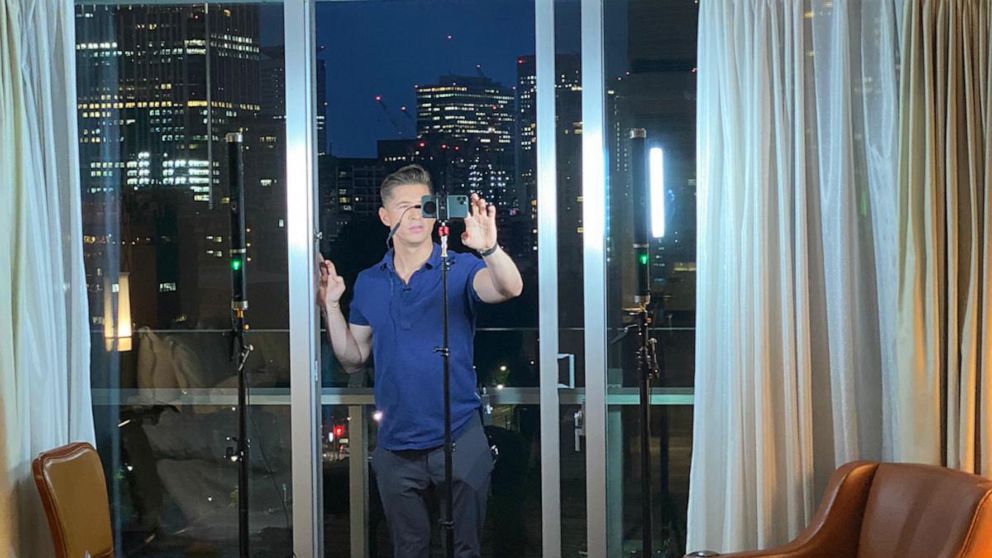 Olympians are often held up as role models to the rest of us. Paragons of commitment, ambition and spirit; their bodies finely tuned machines pushing the boundaries of human achievement.

That’s why I took some comfort when the British team member next to me on the plane ordered his second beer.

I was in fact surrounded by athletes heading to Japan to represent Britain in all kinds of disciplines, clearly excited and making the most of their flight. Although now I wonder if I should worry about Britain’s chances? (My neighbor did have the fish and didn’t eat the dessert, in case you were wondering.)

I was happy for them, especially given the particular stresses they must be under ahead of the Tokyo Games. The COVID measures in place here make this one of the most complicated journeys I’ve ever been on.

In order to travel, I needed a test every day for three days before leaving. I had to download and register two separate apps – one to track my health and the other my location. Data privacy has always been a major concern for contact tracing apps, and I wasn’t wild about having to download the location one.

I travelled with so much paper documentation it was like having a phonebook in my bag. And the whole time concerned that one positive test – even a false positive – would derail all my plans.

For the athletes, it’s far worse, of course: years of preparation and training could be for nothing if a teammate, a bus driver, a complete stranger who happened to spend just a little too long in their company tests positive, and they are required to isolate.

The arrival at Haneda Airport was a swift but mind-boggling gauntlet of officials in Tokyo 2020 uniforms checking paperwork. One would bow their typical welcome and then take a piece of paper before ushering you to the next official who replaces it with another one, and so on. I had absolutely no idea what was going on.

You are tested at the airport – told to spit into a little test tube, and then you wait for the result there. The athletes from my plane arrived a little after me and while I could tell they were still enjoying the experience, the worry about not passing this airport test successfully must have been on their minds. I know it was on mine.

All officials wear a mask, but you can see the smiles behind them – keen to be as welcoming as possible despite the circumstances. But the overwhelming sense I get here is pity for the Japanese. These are not the games they want to be holding. And if you look at the polls, a large majority of people don’t want them to go ahead.

But the thing about the Olympics is that it doesn’t belong to a host city. It belongs to the International Olympic Committee, and they alone can cancel.

And so, as things stand, they’ll get their revenue from these games – something like $4 billion from various rights deals. But the Japanese – who’ve invested billions in building and upgrading their venues – will get next to no financial benefit at all.

The 10 million foreign visitors they’d expected won’t be here. The hotels will go unbooked, goods and services unsold. And given the government here has let people down so badly with a slow vaccine rollout, they may pay another cost: their health.

I am now in three-day mandatory isolation and there’ll be a further 11 days of restricted movement. The hotel has separate “red” and “green” zones depending on how far you are through the process.

Travelling from Britain means you have to test every three days, while for everyone else it’s every seven – a meaningless and outdated distinction from when the delta variant was discovered in the U.K. But, now of course, it’s everywhere.

So what about the athletes in all this? What do they want? Well, my compatriots on the plane sure seemed excited. Postponing another year may have meant never competing in their lives.

And for poorer nations where sports funding is sometimes nonexistent, athletes have to pay their own way. Waiting would have killed their chances too, and we may have only watched the richest nations compete next year.

Tokyo 2020 has announced the common concept of the Opening and Closing ceremonies will be “Moving Forward,” the idea that the world came together to face a common threat, and is now united.

For all the doom and gloom, and reports of a no-fun Olympics, I think when it comes to it, we’ll enjoy these games just as we always do. The most exceptional athletes from all over the world will come together to inspire and amaze us, and they’ll do it in the most extraordinary circumstances.

So, COVID aside, I’ll be rooting for them even harder than usual. Especially my beer-drinking neighbor.