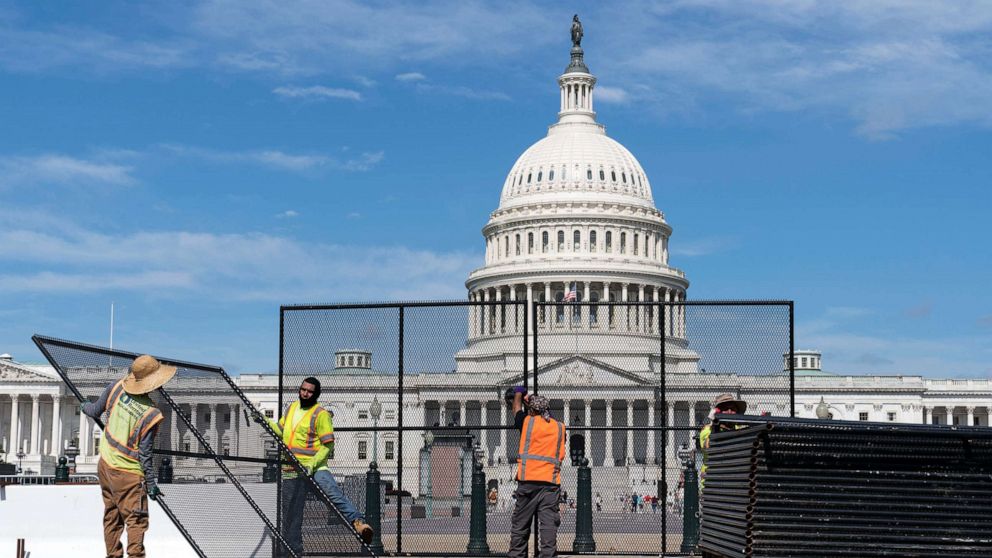 The 7-foot-tall, black, metal fencing set up to fortify the U.S. Capitol in wake of the Jan. 6 siege is coming down.

Workers were seen Friday prepping the fencing and barriers for removal, cutting through the clamps and wires that connect the pieces. They then began to dismantle the fencing following Tropical Storm Elsa’s exit from the Mid-Atlantic. By late Friday, the barricade around the Supreme Court was completely removed. On Saturday, photos captured people walking freely to the Capitol building.

The Capitol Police Board, the oversight body supervising security on Capitol Hill, approved plans to begin removing the remaining temporary fencing around the Capitol on Friday, according to a memo sent to House offices and obtained by ABC News.

Removal was expected to take up to three days, good weather permitting.

“Based on USCP’s assessment of the current threat environment and USCP’s enhanced coordination with District of Columbia, neighboring state and federal law enforcement partners, the Board supports USCP’s recommendation to remove the temporary fencing around Capitol Square,” said a memo from House Sergeant at Arms William Walker sent to Congressional offices and obtained by ABC News.

“USCP will continue to monitor intelligence information and the associated threat environment. The Architect of the Capitol has the ability to and will expeditiously reinstall the temporary fencing should conditions warrant,” the memo continued.

The House Sergeant at Arms also noted that despite the metal fencing coming down there are still limits on public access to the building due to restrictions put in place when the coronavirus pandemic took hold.

“Although the temporary fencing will be removed, current building access restrictions will remain in place,” the memo said.

The fencing has been around the Capitol since after the Jan. 6 attack when security measures were sharply stepped up in the aftermath of the violent assault by a mob of supporters of former President Donald Trump.

An earlier rally turned deadly after Trump encouraged his supporters to march to Capitol Hill, where Congress was meeting to certify Joe Biden’s election win.

Rioters then breached barricades and security checkpoints, forcing then-Vice President Mike Pence and lawmakers to evacuate or shelter in place, temporarily disrupting the certification. Five people died during or after the riot, 140 police officers were injured and the Capitol building suffered approximately $1.5 million in damage.

Democratic D.C. Congresswoman Eleanor Holmes Norton celebrated the announcement of the fencing coming down on Thursday, though with a hint of caution about how free the complex will be.

“While I am seeking further information about the bike racks that will apparently be used to block access to parts of the Lower West Terrace and East Front of the Capitol, overall, the announcement is a victory for D.C. residents, local businesses and the American people,” she said.

Back in February, Norton introduced a bill in Congress, which has not passed, called “No Fencing at the United States Capitol Complex Act” to block the use of federal funds for any fencing at the Capitol.

“This announcement finally vindicates my campaign against fencing off the Capitol,” she said Thursday. “We will never again allow our Capitol Hill neighborhood to be turned into a military zone any more than the Capitol itself.”

An even larger, outer permitter of the non-scalable fencing was reduced by late March to contain just the Capitol grounds — a move approved by lawmakers on both sides of the aisle and Washington Mayor Muriel Bowser, who has also rejected calls for permanent fencing in the nation’s capital.

“When the time is right, the fencing around the White House and U.S. Capitol, just like the plywood we’ve seen on our businesses for far too long, will be taken down,” Bowser tweeted back in January when the fencing went up.

In May, the House passed a $1.9 billion spending bill that Democrats argued would bolster the Capitol’s police force and improve the complex’s security without the need for permanent fencing around the People’s House. That legislation is currently stuck in the Senate