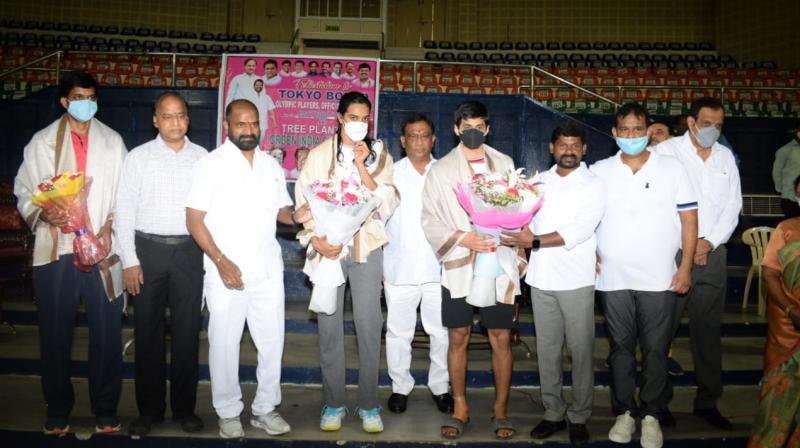 All shuttlers along with their coaches and families were felicitated in an event organised by the state government. "Hon'ble Sports Minister of Telangana, Shri V Srinivas Goud, felicitated #Tokyo2020 bound shuttlers PV Sindhu, Sai Praneeth, Chirag Shetty, and Satwik along with their coaches and family members in an event this week. #Cheer4India @PMOIndia @ianuragthakur @IndiaSports," Khelo India tweeted.

On Thursday, the Rio Olympics silver medallist PV Sindhu was given a comparatively easier draw in the upcoming Tokyo Olympics. Sindhu has been selected in Group J of women's singles and has been seeded sixth. When it comes to the men's category, Sai Praneeth has also been given a respite as he has been seeded 13th in Group D. In the singles competition, the top player from each group will qualify for the knock-out stages.

Men's doubles pair of Chirag Shetty and Satwiksairaj Rankireddy have been placed in Group A. The duo will have to square off against the top seed Indonesian pair of Kevin Sanjaya Sukamuljo and Marcus Fernaldi Gideon, Chinese Taipei's Lee Yang and Wang Chi-Lin, and England's duo of Ben Lane and Sean Vendy.

Earlier, Tamil Nadu Sports Minister Siva M Meyyanathan also distributed Rs 5 lakh cash award to the Olympic-bound athletes from the state. The five athletes whose families were felicitated were Arokia Rajiv, Subha Venkatesan, Dhanalakshmi Sekhar, Revathi Veeramani, and Nanganathan Pandi. A total of Rs 25 lakh was given to the parents of the five sportspersons.