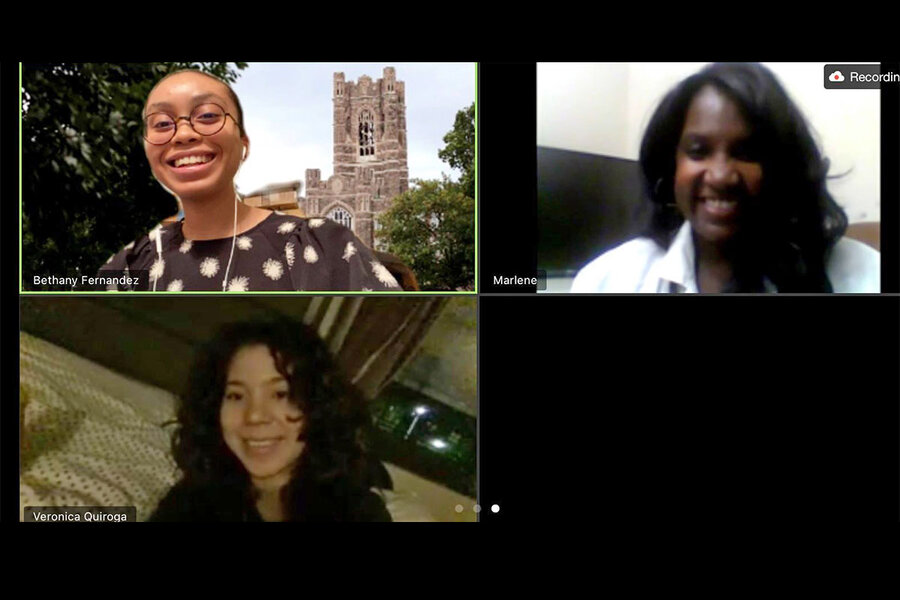 “In moments like these, a cynical person might think, ‘Oh, people are going to be selfish’ – resources are scarce, survival of the fittest, or whatever,” says Ms. Fernandez. “But no, it was the complete opposite. People were willing to give, people willing to extend themselves, even if they may not have had that much to give or to extend.”

Far from tales of woe, in fact, she and the five others in the project found their subjects again and again using a particular word to describe their experiences: resilience.

Resilience in the face of hardship and trauma has always been a part of the human story. But during the past few decades, researchers have probed more deeply into what some scholars call a “psychological immune system” that enables many people to respond to even the worst of situations and to recover from their resulting traumas.

Such findings do not minimize or marginalize trauma and suffering. But just as science begins to understand and address post-traumatic stress, many researchers also find that human resilience can bring on what they call post-traumatic growth, a constructive and life-changing shift in their emotional lives. From even the most traumatic experiences, people can emerge stronger, gaining a deeper sense of their place in the world in a way that is positive and meaningful.

“If there is a silver lining that could come out of this, it would be that people are understanding that while the negatives scream at you, the positives – the resilience you can always find in people – these are only whispers,” says Ken Yeager, director of the Stress, Trauma and Resilience (STAR) Program at The Ohio State University in Columbus.

Human beings are wired to take particular note of the dangers that surround them and even focus on stories of trauma and fear. “The fight-or-flight response actually helps the species as a whole to survive, but it does nothing to make you happy,” Dr. Yeager says. “It does nothing to help you build resilience.”

“We always build resilience in groups, in core groups of people who are cooperating and caring for each other,” he says.

Looking at the Bronx differently

Alison Rini, a senior from New Jersey studying English and Italian, had collected oral histories before – as a research assistant with Fordham’s Bronx African American History project and with the Bronx Italian American History Initiative. But there was something different about documenting stories during the pandemic.

“It was such a surprising experience, finding these examples of people describing their resilience in the midst of such hard times – in the Bronx, in particular,” Ms. Rini says. “I really liked being part of this project in that, in the news at the time you heard so much about these neighborhoods in New York City … that had all these high rates of hospitalization and death.”

“But with our project, we were able to talk to individual people … and just go in depth into their life and their story, and instead of looking at it broadly in this kind of horrified way, finding this sense of community – people coming together and standing up for each other.”

The Bronx wasn’t alone in this. A recent report by the British medical journal The Lancet analyzed numerous studies on mental health during the pandemic. The authors found that after an initial spike in overall levels of depression, anxiety, and distress at the outset, these began to fall to pre-pandemic levels in a relatively short amount of time. In some instances, measures of these experiences even declined.

“The pandemic has been a test of the global psychological immune system, which appears more robust than we would have guessed,” wrote scholars Lara Aknin, Jamil Zaki, and Elizabeth Dunn in The Atlantic. “In order to make sense of these patterns, we looked back to a classic psychology finding: People are more resilient than they themselves realize.”

The authors emphasize that such broad trends should not erase “the immense pain, overwhelming loss, and financial hardships” so many have faced over the past year and a half, especially disadvantaged populations and those whose suffering was made even worse by COVID-19.

“But the astonishing resilience that most people have exhibited in the face of the sudden changes brought on by the pandemic holds its own lessons,” they wrote. “Human beings are not passive victims of change but active stewards of our own well-being.”

The stories in the Bronx COVID-19 Oral History Project illustrate these findings.

“What was discovered through our research was a dedicated, authentic, and human picture of the Bronx unlike any project has seen before,” wrote two of the student co-founders of the project, Veronica Quiroga and Carlos Rico, in a campus newsletter. “Despite one of the darkest eras of the city in recent memory, the light of community, family, and perseverance shone through in the voices of the Bronx COVID-19 Project.”

“You’re stronger than you thought”

In what Ms. Fernandez calls one of her most memorable interviews, the owner of a Bronx restaurant described how she lost nearly 85% of her business and struggled to stay afloat after laying off most of her employees.

Though the restaurant specializes in Puerto Rican and American cuisine, the owner, Maribel Gonzalez, kept the original name of the restaurant she bought 16 years ago, South of France. She said it is an homage to the love story of the first owners, who constructed a replica of the restaurant where they met and fell in love in France before moving to New York.

Describing herself as a person of faith, Ms. Gonzalez said she had always offered her local community a free buffet every Wednesday. During the pandemic, as she and one or two employees struggled to keep the restaurant open, she kept that tradition alive, providing a free buffet at the height of the shutdown, even if only for an hour or two a week.

“You know, in all of this devastation, there are also a lot of blessings, because you find that you’re more resilient, that you’re stronger than you may have thought,” Ms. Gonzalez told the project. She said her restaurant provided hundreds of meals for front-line health workers in partnership with others, supported by donations from a GoFundMe page.

“When you need to lug that 50 pound bag because you have to make whatever money you can, because maybe some of it can go to feed families that can’t afford it, you find the strength, you get the stamina, you find the chutzpah, if you will, to lift that bag, because there are so many depending on it – myself, my business, my future, the future of my employees, and those of my community.”

“So I take a little better care of myself, and I’ve developed a couple muscles in the interim!” Ms. Gonzalez told the project with a chuckle.

Learning how to be adaptable

In an interview with Ms. Rini, the executive director of the South Bronx education center described a similar experience.

“The Bronx, as much as it has been through, continues to be resilient,” said Derek Smith, whose A House on Beekman struggled to serve its lower-income clientele.

During the shutdown, many of A House on Beekman’s clients found themselves without adequate internet connections or computers. New York’s Department of Education had been supplying lower-income households with a computer, but this wasn’t enough for those with multiple children who needed to attend remote classes at the same time.

So the organization started providing their own devices, about 20 or so, to families with these needs, Mr. Smith said. And in many instances, their role became listening to those who just needed to talk about what they were going through.

In two dozen interviews with Bronx teachers, families, artists, and community leaders, people described a similar sense of energy, positivity, and resilience, says Mark Naison, professor of history and African and African American studies at Fordham, who advised the students.

“You know, we found all these people who were doing amazing things to help keep the community alive during this time,” he says.

The project had a profound effect on Ms. Fernandez as she wrestled with the challenges in her own life.

“It was the one thing that stood out to me, the generosity that was shown all over, even throughout the time of the pandemic,” she says. “Because when you see how resources are limited, when you’re being stretched out by work, by family obligations, by life and all of that, even with all the suffering going on, people were willing to give, people were willing to offer compassion and kindness.”