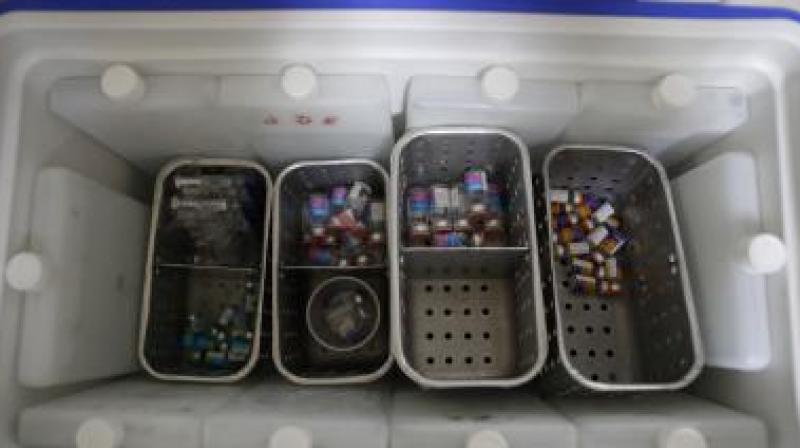 New Delhi:  A heat-tolerant COVID-19 vaccine formulation developed by the Indian Institute of Science (IISc) Bengaluru has proven effective against all current SARS-CoV-2 variants of concern, according to a study in animals.

The formulation also protected hamsters from the virus and remained stable at 37 degrees Celsius up to a month, and at 100 degrees Celsius for up to 90 minutes, the researchers said.

The team, including researchers from Australia's Commonwealth Scientific and Industrial Research Organisation (CSIRO), noted that most vaccines require refrigeration to remain effective.

For example, the Oxford-AstraZeneca vaccine, known as Covishield in India, must be kept between 2-8 degrees Celsius and the Pfizer preventive requires specialised cold storage at minus 70 degrees Celsius.

According to S S Vasan, CSIRO's COVID-19 project leader and co-author of the study, the Mynvax-vaccinated mice sera show a strong response to all variants of the live virus.

"Our data shows that all formulations of Mynvax tested result in antibodies capable of consistent and effective neutralisation of the Alpha, Beta, Gamma and Delta SARS-CoV-2 variants of concern," Vasan said.

The IISc-Mynvax vaccine uses a part of the viral spike protein called the receptor-binding domain (RBD) — that allows the virus to connect with the host cell to infect it.

The preventive differs from other vaccine as it only uses a specific part of the RBD — a string of 200 amino acids, instead of the entire spike protein.

CSIRO's evaluation of the different Mynvax formulations will support selection of the most suitable candidate for planned human clinical trials in India later this year.

"A thermostable or 'warm vaccine' is critical for remote or resource-limited locations with extremely hot climates which lack reliable cold storage supply chains, including regional communities in Australia's outback and the Indo-Pacific region," Grenfall said.

In addition to IISc and CSIRO, the study included researchers from the University of York in the UK, CSIR-Institute of Genomics and Integrative Biology (CSIR-IGIB), New Delhi, Translational Health Science and Technology Institute, Faridabad, and CSIR-Institute of Microbial Technology, Chandigarh.