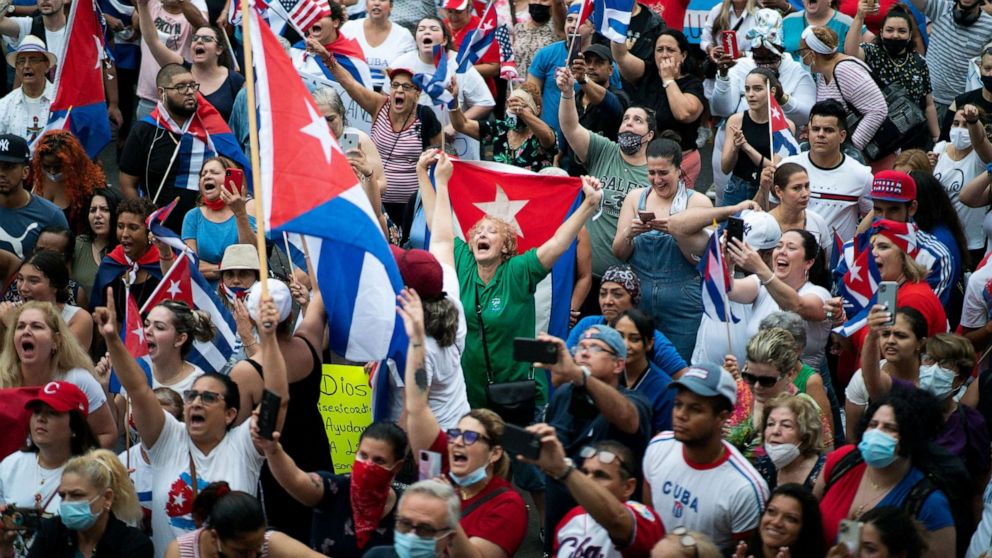 Thousands of Cubans have been protesting food, vaccine and medicine shortages, in the one of the country’s largest demonstrations in decades.

Some residents went days without power in the summer heat, while others continue to be forced to wait in long lines for basic goods, as prices continue to rise. Activists say COVID-19 has exacerbated other structural issues, like health care and poverty, and the extended electricity outages signal a breaking point.

The country is facing a surge of COVID-19 cases, according to the Centers for Disease Control and Prevention, heightening concerns about government protection and services.

Chanting “freedom,” “enough” and “unite,” protesters started taking to the streets on Sunday, July 11, in Cuba and the U.S., blocking traffic to demand action from the Cuban government and President Miguel Díaz-Canel.

Cuban historian and activist Marley Pulido told ABC News this hasn’t been an organized effort, but that the government’s continued inaction in addressing inequality has forced many to take the streets.

The August 1994 uprising was the last anti-government protest of this magnitude — when Cuba fell into an economic crisis following the collapse of the Soviet Union, according to Pulido.

During a December 2020 parliament session, Cuba’s Economy Minister Alejandro Gil announced that Cuba’s economy shrank 11% during the pandemic, worsened by the U.S.-imposed trade embargo. The trade embargo, which first began in the early 1960s, bans American businesses from working with Cuban interests.

Rising international food and shipping prices have continued to worsen the country’s access to goods from overseas, according to Gil.

More than 70 to 80% of Cuba’s food is imported onto the island, according to World Food Programme. So that 30% reduction in imports led to a scarcity in food, as well as medicine, fuel and more that it imports.

On top of a lack of access to basic needs, Cuba declined to import foreign vaccines through a World Health Organization-led COVAX dose sharing initiative, which provides free or reduced cost vaccines to low resource countries. Instead, the country opted to create its own vaccine.

However, as cases continue to rise on the island of roughly 11 million people, a shortage of syringes has hindered the vaccine rollout, according to Global Health Partners, a non-profit dedicated to public health in Latin America.

The compounding issues have resulted in unrest across the island.

How the government has responded

In April 2020, amidst the global coronavirus pandemic and the ever-growing economic struggles, Raul Castro stepped down as head of Cuba’s Communist Party despite the Castros’ decades-long leadership of the party.

The Castro’s nominated successor, Díaz-Canel, condemned the protests in a televised appearance, calling on supporters to counter-protest and confront the anti-government demonstrations.

As videos and posts documenting the protests in Cuba went viral on social media, several activists say that internet service was shut down, which also left residents with limited access to resources outside of the island.

A heavy police presence also trailed protesters. Officials say they began arresting demonstrators and journalists after public property was damaged and police officers were attacked. Cuban officials have not reported how many people were arrested.

One man is confirmed to have died in connection with the protests, according to Cuba’s Interior Ministry.

The Cuban president blamed the unrest on U.S. forces, claiming that Cubans in America used social media to prompt demonstrations and blamed the trade embargo for the country’s economic crisis.

US involvement and what’s to come

Though the Obama administration loosened the sanctions against the island government in 2014, former President Donald Trump reversed America’s position and introduced new sanctions to continue to put pressure on the Cuban government.

President Joe Biden has yet to address the call to end the embargo and its role in the country’s economic challenges. However, Biden has voiced his support for Cuban protesters when speaking to reporters on July 12 at the White House.

“The United States calls on the Cuban regime to hear their people and serve their needs at this vital moment rather than enriching themselves,” Biden said.

As for Cubans trying to seek refuge in the United States from the unrest via boat, U.S. Secretary of Homeland Security Alejandro Mayorkas warned against it.

“Allow me to be clear: if you take to the sea, you will not come to the United States,” Mayorkas said. “Anyone intercepted at sea, regardless of their nationality will not be permitted to enter the United States … To those who risk their lives doing so, this risk is not worth taking.”