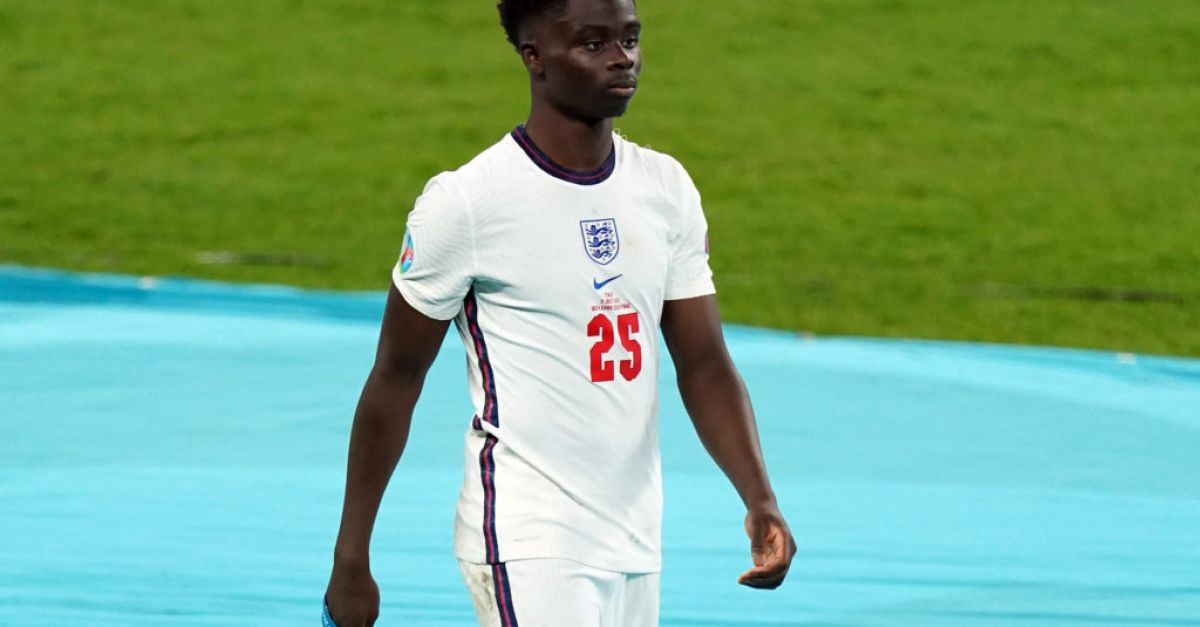 Five people have so far been arrested in connection with online abuse directed at England players, with the UK’s football policing lead warning those who posted hateful material: “We will track you down.”

The UK Football Policing Unit (UKFPU) provided an update on its investigation on Thursday following abusive posts targeting Marcus Rashford, Jadon Sancho and Bukayo Saka in the wake of England’s defeat on penalties to Italy in the Euro 2020 final on Sunday.

A statement read: “Following England’s defeat against Italy on Sunday a torrent of racist comments aimed at some of the team’s black players appeared on platforms including Facebook, Instagram and Twitter.

“A hate crime investigation is under way by the UKFPU, with a dedicated team of investigators working their way through a large number of reports from across the country.

“So far, dozens of data applications have been submitted to social media companies and four people have been arrested by local police forces.”

Within hours of the statement being published, Cheshire Police confirmed a further arrest of a 42-year-old man from Runcorn as part of an investigation into a racist social media message.

The force said the man had been arrested on Wednesday on suspicion of displaying threatening, abusive or insulting written material that is likely to stir up racial hatred under section 18 of the public order act 1986.

He has since been released under investigation pending further enquiries.

BREAKING NEWS | Officers from @PoliceRuncorn have arrested a 42-year-old man in relation to a racist social media message which was posted after the Euro 2020 final.

Chief Constable Mark Roberts, the UK National Police Chiefs’ Council football policing lead, said: “The racial abuse aimed at our own players following Sunday night’s game is utterly vile and has quite rightly shocked and appalled people across the country.

“Our England team have been true role models during the tournament, conducting themselves with professionalism and dignity. I’m disgusted there are individuals out there who think it’s acceptable to direct such abhorrent abuse at them, or at anybody else.

“The UKFPU investigation is well under way and work continues to identify those responsible. We are working very closely with social media platforms, who are providing data we need to progress enquiries.

“If we identify that you are behind this crime, we will track you down and you will face the serious consequences of your shameful actions.”

The UKFPU said it receives reports from various channels including from local forces, charities, football clubs and other partner organisations.

When an offender’s details are identified, these are passed on to the relevant local force to investigate further and take appropriate action in conjunction with the Crown Prosecution Service.

On Wednesday, Greater Manchester Police confirmed a 37-year-old man from Ashton-upon-Mersey had been arrested after social media posts were directed towards England players following Sunday’s match.

British prime minister Boris Johnson said on Wednesday that the UK government was extending the scope of football banning orders to include online abuse.

Banning orders exclude people from attending matches for between a three and 10-year period.

The Premier League is understood to welcome the move, believing that the orders have been under-utilised in the past.

The UKFPU also said that as of Tuesday, 897 football-related incidents and 264 arrests had been recorded across the country in the 24-hour period surrounding the final.

That brought the total number of football-related incidents during the tournament to 2,344, and the arrests total to 630.

London’s Metropolitan Police responded to criticism of its handling of Sunday’s final in a statement issued on Wednesday evening, in particular security breaches at Wembley which enabled ticketless individuals to gain entry to the stadium.

Deputy Assistant Commissioner Jane Connors said: “I do not accept that the policing operation failed and I stand by the difficult decisions made by police officers and the Met’s public order commanders.

“Without their immediate intervention, it is possible that this game could have been abandoned.”