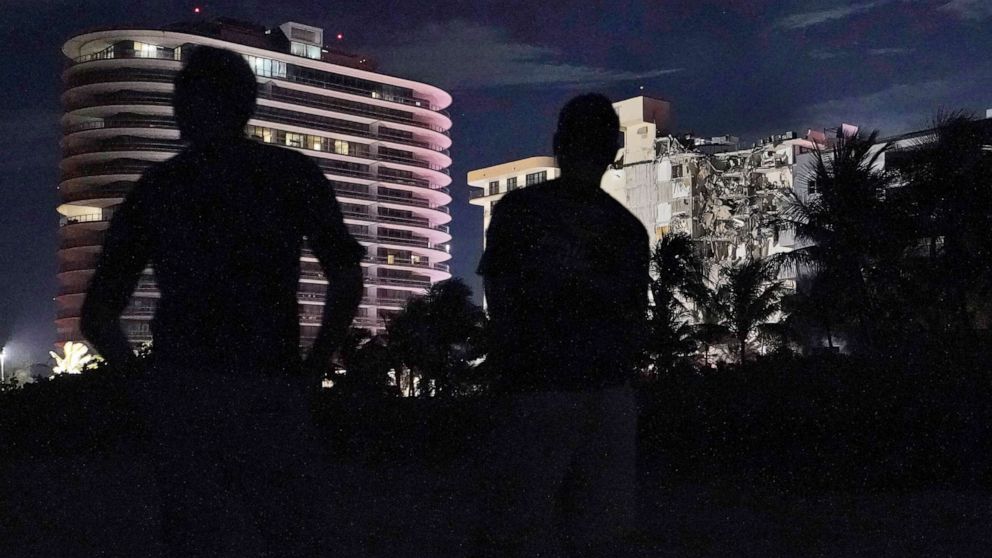 Nearly two dozen 911 calls released by the Miami-Dade Police Department Wednesday convey the confusion, panic and disbelief among residents and neighbors after the partial collapse of the 12-story Champlain Towers South condominium in the beachside town of Surfside, Florida, in the early hours of June 24.

“I’m in the Champlain Towers, something is going on here. You gotta get us out of here.”

Frantic 911 calls came in from residents who were trapped inside after approximately 55 of the oceanfront complex’s 136 units were destroyed in the collapse at around 1:15 a.m.

“Half the building’s gone!” a panicked woman told the operator from her apartment.

A woman calling from the second floor told the operator that she couldn’t find an exit.

“We didn’t know which stairs we can get out,” she said.

A man on the same call told the operator he heard people yelling from the collapsed portion of the building.

“Is it safe for us to stay here?” he later asked.

The operator stayed with him on the phone as he and his family went down to the basement looking for a way out.

“The entire garage is flooded,” he said, updating the operator that they were going to try to go back to the second floor and that other people had joined his family.

“There are people in the rubble yelling, by the way,” he later said, softly.

One person called 911 from the flooded garage.

“A bunch of us are in the garage but we cannot get out,” the caller said. “We’re going back up the stairwell, the garage is inundated with water. We don’t know where the water is coming from.”

A distressed woman called from outside the parking garage asking to be rescued.

“Can somebody help me get out?” she asked. “I was able to escape but I’m in the parking lot. If the building comes down it will come down on my head.”

Other calls came in from family members of those who lived in the condo begging for help.

“My sister lives there,” one person said. “I don’t know, something happened to it. I don’t know, half of the building isn’t there anymore. She is alive and she is there, she’s in apartment [muted]. If someone can get her out through the balcony.”

Witnesses who heard the collapse and saw the aftermath also called 911.

“What are you seeing sir because we are getting a lot of calls over there?” an overwhelmed operator asked in one call.

“A very large building collapse, like the building next to us is gone,” the caller replied.

Another caller a block and a half away reported hearing an explosion.

Others reported seeing smoke and flames following the collapse.

“A building collapsed a block away from me and there is major smoke everywhere. We don’t know if anybody is hurt,” a caller said. “I heard the explosion all the way and the building is collapsing.”

Several callers described hearing what sounded like an earthquake, as well as an explosion from the garage.

“I woke up because I was hearing some noise,” one caller said. “I looked outside and the patio area started sinking down.”

“The building just went into the sinkhole,” the caller said a few seconds later. “There will be many, many people dead.”

The full toll of the disaster still remains to be seen; after nearly three weeks of search efforts, at least 97 people have been confirmed dead, officials said Wednesday. The cause of the partial collapse is under investigation.

Documents released by the city of Surfside show there was structural damage to the concrete slabs on the condo building’s pool deck and failed waterproofing in parts of the tower, and that the pool deck and the ceiling of the underground parking garage beneath it had needed repairs as early as 1996.