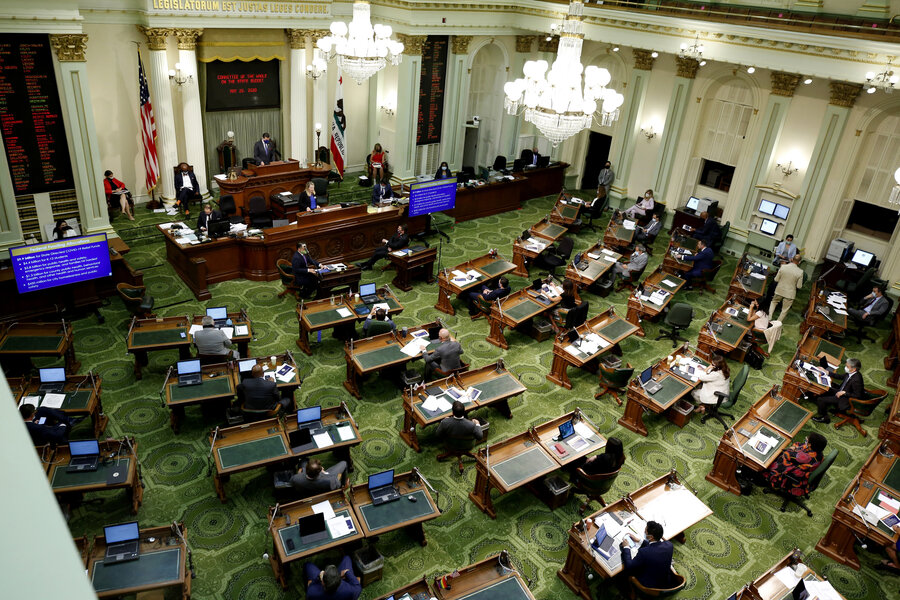 California lawmakers on Thursday approved the first state-funded guaranteed income plan in the United States. The plan will provide $35 million in monthly cash payments to qualifying pregnant people and young adults who recently left foster care with no restrictions on how they spend it.

The votes – 36-0 in the Senate and 64-0 in the Assembly – showed bipartisan support for an idea that is gaining momentum across the country. Dozens of local programs have sprung up in recent years, including some that have been privately funded, making it easier for elected officials to sell the public on the idea.

California’s plan is taxpayer-funded, and could spur other states to follow its lead.

“If you look at the stats for our foster youth, they are devastating,” Senate Republican Leader Scott Wilk said. “We should be doing all we can to lift these young people up.”

Local governments and organizations will apply for the money and run their programs. The state Department of Social Services will decide who gets funding. California lawmakers left it up to local officials to determine the size of the monthly payments, which generally range from $500 to $1,000 in existing programs around the country.

The vote came on the same day millions of parents began receiving their first monthly payments under a temporary expansion of the federal child tax credit many view as a form of guaranteed income.

“Now there is momentum, things are moving quickly,” said Michael Tubbs, an advisor to Governor Gavin Newsom, who was a trailblazer when he instituted a guaranteed income program as mayor of Stockton. “The next stop is the federal government.”

For decades, most government assistance programs have had strict rules about how the money could be spent, usually limiting benefits to things like food or housing. But a guaranteed income program gives money to people with no rules on how to spend it. The idea is to reduce the stresses of poverty that cause health problems and make it harder for people to find and keep work.

“It changes the philosophy from ‘big brother government knows what’s best for you,’” said state Senator Dave Cortese, a Democrat from San Jose. “We’ve been very prescriptive with that population as a state and as counties go. Look at the failure. Half of them don’t get their high school diplomas, let alone advance like other people their age.”

“We should be pushing policies that encourage the value of work,” said Mr. Fong, who abstained from Thursday’s vote. “Guaranteed income doesn’t provide the job training and skills needed for upward mobility.”

Guaranteed income programs date back to the 18th century. The U.S. government even experimented with them in the 1960s and 1970s during the Nixon administration before they fell out of favor.

But recently, guaranteed income programs have been making a comeback. Programs have been announced in New Orleans; Oakland, California; Tacoma, Washington; Gainesville, Florida; and Los Angeles – the nation’s second largest city, which has a plan to give $1,000 a month to 2,000 needy families.

The state wants to target the money on programs that benefit pregnant people and young adults aged out of the foster care system to help them transition to life on their own. The latter includes people like Naihla De Jesus, who was removed from her mother’s custody at 17 and bounced between living with an aunt, a godmother, and a boyfriend until landing in a transitional housing program.

She became ineligible for that program when she turned 24 last year, which normally would have ended her government assistance as a foster child. Instead, the taxpayers of Santa Clara County have been paying her $1,000 a month with no restrictions on how she can spend it, part of a guaranteed income program targeting former foster care children.

Ms. De Jesus is also caring for her 9-year-old brother as his temporary guardian while battling anxiety and depression. She said her condition made it hard for her to keep a job because some days she wouldn’t have enough energy to get out of bed and wouldn’t go to work.

Now, she has a full-time job as a client support specialist with the Bill Wilson Center, where she works with young people who are in situations like hers. She says she doesn’t worry about money like she used to, choosing to save most of what she gets from the guaranteed income program. She used some of it to buy things for her brother, whose interest in expensive electronics grows as he gets older.

And she used the money to save for a down payment for her “dream car,” a blue Subaru WRX.

“I’m proud of myself, of where I am,” she said. “I don’t have to stress and then isolate myself and overthink, ‘Oh, I’m not going to have enough money to pay my rent or pay my phone bill.”

Santa Clara County’s program has cost the county $1.4 million so far. Participants get the money on a debit card, which they can use for purchases or to withdraw money from an ATM. County officials ask them to fill out surveys to monitor how they are doing, but they haven’t completed a thorough analysis, said Melanie Jimenez Perez, who oversees the program.

An analysis of a guaranteed program in Stockton found full-time employment increased among participants after the first year of receiving the money.