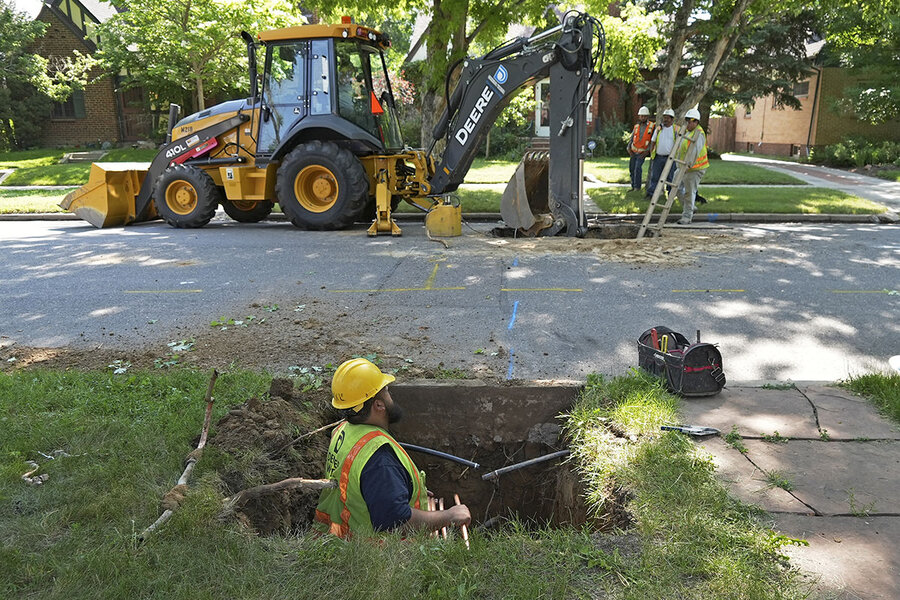 If America is going to get new bridges, one might first need to be built between Democrats and Republicans in Congress – and perhaps another within the Democratic Party, which is grappling with a gap between the priorities of staunch centrists and increasingly influential progressives.

A bipartisan group of 22 senators has agreed to a blueprint for overhauling America’s infrastructure, from repairing cracked roads and pipes to expanding broadband internet across rural America. Now they are working furiously to hammer out the details, as Senate Majority Leader Chuck Schumer has given them a deadline of next week to prepare the bill for a vote. Senator Schumer could use that pressure to his advantage to pass a related $3.5 trillion budget plan that includes many priorities on the political left, including “soft” infrastructure items like home health care and manufacturing.

Heading into the weekend, the Senate corridors were abuzz as lawmakers strode in and out of a tucked-away room in which representatives from the White House and the bipartisan group, dubbed the G22, worked to hash out details of the infrastructure bill. Most would not comment on the talks, marching resolutely through a gantlet of journalists waiting outside.

A group of bipartisan senators have agreed to a blueprint for overhauling America’s infrastructure, from roads to broadband; now they must overcome a lack of trust between and within their parties.

“I got nothing for you,” said Sen. Mitt Romney as he left the building, a herd of reporters sprinting after him. “Is this deal falling apart, sir?” one asked. “Absolutely not,” he said, before being spirited away by a waiting van.

Underlying the high-pressure negotiations is a distrust not only between Democrats and Republicans, but also between the Democratic Party’s left wing and centrists. Republicans don’t want to be seen as giving Democrats a bipartisan win on the eve of passing what the GOP sees as a wildly irresponsible expansion of government. But they don’t have much leverage; Democrats could pass the budget deal without a single GOP vote. However, Democrats also can’t lose any on their own side – and progressives have threatened to hold the infrastructure bill hostage unless Democratic centrists agree to vote for the $3.5 trillion budget plan.

“The trust within the U.S. Senate has been eroded so severely, it’s an obstacle in every direction,” says Democratic Sen. John Hickenlooper of Colorado, a member of the group of 22. However, the former governor adds, the trust the G22 has so far modeled in its discussion of policy disagreements could help bring about a deal that will stick. “My life experience is that that level of effort builds a sufficient relationship so you can actually change people’s positions – or you find you’re changing your own position.”

In an attempt to get bipartisan support for America’s most pressing problems – something he had campaigned on – President Biden agreed to break off the traditional infrastructure components into a separate bill. The idea was that Democrats would then pass the other policies via a fast-track process known as budget reconciliation.

In late June, following negotiations with senators, the White House announced that they had arrived at a $1.2 trillion bipartisan infrastructure framework – the largest such investment in nearly a century. The framework included a record investment in public transit, connecting every American to high-speed internet, building a national network of 500,000 electric car chargers, and eliminating lead pipes in order to deliver clean drinking water. About half the cost would be covered by previously approved funding, including COVID-19 relief. How to pay for the remainder – $579 billion – remains a key sticking point for the bipartisan group. Amid a ballooning national debt and rising inflation, Republicans as well as moderate Democrats like West Virginia Sen. Joe Manchin have pushed to find ways to pay for all of it, rather than adding to U.S. deficit spending.

“I would support a bipartisan infrastructure bill that is responsibly paid for, regardless of what the Democrats would do on reconciliation – I figure that they’re going to try that anyway,” said GOP Sen. John Cornyn of Texas, adding that the challenge will be coming up with how to pay for the infrastructure bill. “We always knew that was going to be the toughest problem and everybody wants to kind of whistle past the graveyard when it comes to dealing with pay-fors.”

Many of the other social spending policies laid out in President Biden’s proposed $4 trillion investment would be contained in the $3.5 trillion plan announced Wednesday by Democrats on the Senate Budget Committee, chaired by Sen. Bernie Sanders of Vermont. Though details have yet to be worked out, it would encompass priorities such as universal pre-K, paid family leave, and the extension of several temporary tax-credit expansions agreed to in the $1.9 trillion COVID-19 relief bill passed in March.

After a Senate Democratic Caucus luncheon with President Biden at the Capitol on Wednesday, Sen. Elizabeth Warren – another key progressive – later said she thought all Democrats were on board. But some are worried that centrists – particularly Senator Manchin and Sen. Kyrsten Sinema of Arizona, the Democratic lead on the G22 infrastructure negotiations – could torpedo it or reduce the overall price tag.

Representative Ocasio-Cortez threatened to push back if they did, vowing to withhold support for the bipartisan infrastructure bill in the House if Senator Manchin, whose state’s infrastructure ranks among the worst in the nation, did not support the $3.5 trillion budget deal in the Senate.

If both pass, it would give Democrats all their policy priorities and a bipartisan feather in their cap. Republicans don’t want to be seen as enabling what they feel is an irresponsibly large budget package, but if they try to exercise what little leverage they have to bring down the size of the budget bill, progressives could retaliate by holding the infrastructure bill hostage, as Ms. Ocasio-Cortez has threatened to do.

Meanwhile, Republicans expressed confusion at Mr. Schumer’s move to force a vote on the infrastructure bill before the text had even been completed. He said he would move to hold a vote Wednesday to cut off debate. If that vote gets the support of at least 60 senators, a subsequent vote would be held on the legislation itself.

Republican Sen. Susan Collins of Maine said she found the deadline unrealistic. “I don’t understand what the [Senate majority] leader is trying to do,” she said.

GOP Sen. Shelley Moore Capito of West Virginia, who spearheaded an earlier effort at reaching a bipartisan infrastructure deal with President Biden, said Mr. Schumer’s deadline appeared to be a tactic to pressure his own members.

Following a meeting to hash out broadband internet expansion, Republican Sen. Mike Rounds of South Dakota, another member of the G22, said Mr. Schumer’s move was “part of the game” and not unexpected. He also posited that if the pressure results in the deal falling apart, Mr. Schumer could potentially fold the more traditional infrastructure elements into what Senator Rounds calls the $3.5 trillion “boondoggle,” making the larger package more acceptable to some of the moderate Democrats. Still, even if securing infrastructure investments for their state might help justify the cost, some moderates may push back on the overall price tag.

The bipartisan G22, which is likely to continue working over the weekend, is no stranger to high-stakes negotiations under pressure. “Most of us were kind of the nucleus of the group that came together in November for the COVID relief package,” said GOP Sen. Lisa Murkowski of Alaska. “So we’ve been working together – we can talk, we can laugh, we can argue. And hopefully we can build things.”