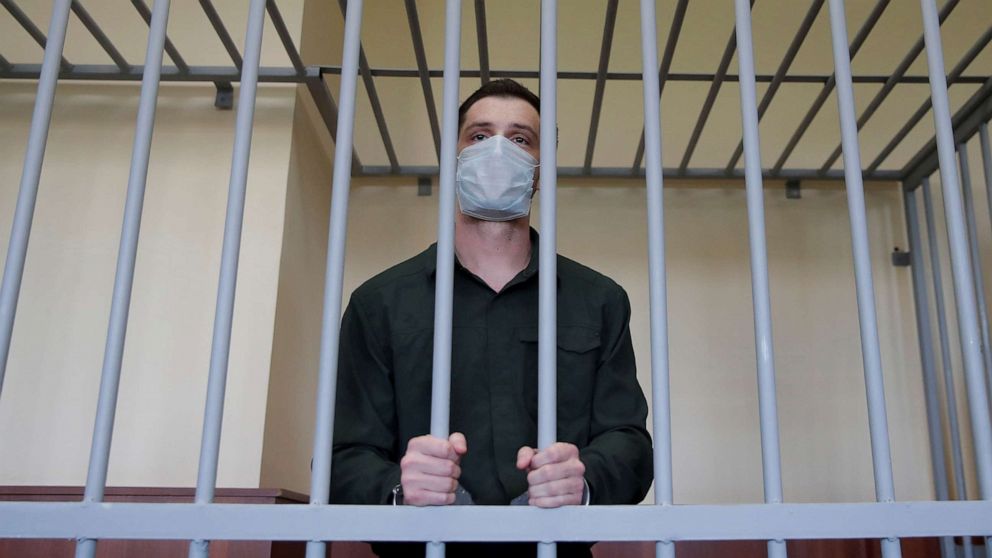 MOSCOW — Trevor Reed, one of two American former Marines that U.S. officials say is being held hostage by Russia, has been transferred to a prison camp a few hundred miles from Moscow, according to a prison rights monitoring group.

Reed, 30, and the other ex-Marine, Paul Whelan, have spent about two years in detention in Russia imprisoned on charges their families and American officials say were fabricated by Russia in order to seize them as bargaining chips.

President Joe Biden and Russian President Vladimir Putin discussed the two Americans’ detention and the possibility of a prisoner swap to free them at their summit in Switzerland last month.

Reed has now been moved to a prison camp in Mordovia, a region about 350 miles from Moscow, Alexey Melnikov, an official at Moscow’s Public Monitoring Commission confirmed to ABC News on Friday. The other former Marine, Whelan, has already spent nearly a year in a camp in the same region, known for its high number of prisons.

“Trevor Reed was removed this morning from Moscow’s Investigative Isolation Jail No. 5 to one of the Republic of Mordovia’s camps,” said Melnikov, whose commission is empowered by the Russian government to inspect prison conditions.

Melnikov said he did not know which camp in Mordovia Reed had been sent to and that it is not yet clear if it will be the same camp where Whelan is held, which is a prison used to house foreign convicts.

Reed fell into the hands of Russian police in the summer of 2019 following a drunken party in Moscow where he was visiting his girlfriend.

Police initially said they were taking him to sober up at the station but after agents from Russia’s FSB intelligence agency arrived to question him Reed was charged with assaulting a police officer, according to his family. He was put on trial on the charges that U.S. officials have said were absurd. A court in July 2020 sentenced Reed to nine years in prison.

Reed, whose family lives in Texas, spent nearly two years in detention in Moscow pre-trial jails. But last month, a court rejected his appeal against the sentence, clearing the way for him to be moved to a prison camp.

From early in their detention, Russia has suggested trading Reed and Whelan for Russians serving prison sentences in the United States.

Hope for a potential trade have risen recently following Biden and Putin’s summit in Geneva, where both sides signaled a willingness to discuss finding a possible deal.

Since 2019, Russian officials have named several Russians they would like to see released, including Viktor Bout, one of the world’s most notorious arms dealers, and Konstantin Yaroshenko, a pilot jailed on drug smuggling charges.

Russia state media has more recently highlighted another Russian citizen jailed in the U.S., Roman Seleznev, who is serving a 27-year sentence on criminal hacking charges.

Bout’s release has been seen as a non-starter for American officials because of the severity of his crimes. But Yaroshenko and Seleznev are seen as more likely to be included in any trade.

Yaroshenko was arrested in a 2010 Drug Enforcement Agency sting in Liberia during which he agreed to ship cocaine to Africa and the U.S. He is serving a 20-year sentence.

Seleznev was captured by U.S. law enforcement agents in Maldives in 2014 and convicted of running a massive hacking scheme to steal credit card data from small businesses in the U.S.

All three men are suspected to have links to Russian intelligence. During Seleznev’s trial, prosecutors provided documents alleging that Seleznev was tipped off to an earlier FBI investigation against him by Russia’s Federal Security Service or FSB, after FBI agents met with the Russian agency.

The Biden administration has said freeing Reed and Whelan is a priority, and last month, the U.S. ambassador to Moscow John Sullivan said he expected there would be talks with the Russian government on them both.

Reed’s family had hoped he would remain in Moscow until a deal to free him was negotiated.

The Russian news service Interfax cited an anonymous source as saying that Reed’s transfer did not mean a trade for him was less likely. The move instead may just be the Russian judicial process continuing. Russian prisoners are usually moved a few weeks after an appeal is turned down.

“Reed’s transfer to a penitentiary absolutely does not mean that his possible exchange for a Russian is no longer on the table. He may still be extradited to the United States if the relevant consensus is reached with the U.S. side,” the source told Interfax.

Whelan, 51, was security executive for the auto parts company BorgWarner when he was arrested in late December 2018 in his hotel room by FSB agents while visiting Moscow for a friend’s wedding. He was accused of espionage and sentenced to 16 years in prison in a closed trial on charges his family and U.S. officials have said were fabricated.

“It’s pretty grim. Quite dilapidated,” Whelan said. “There’s probably like 50 to 60 of us in the building. So we kind of live on top of each other.”

He said the inmates work eight-hour shifts in a workshop he described as “Dickensian” and that they are only permitted to shower twice a week. But other prisoners treated him well he said, nicknaming him “Tourist.”